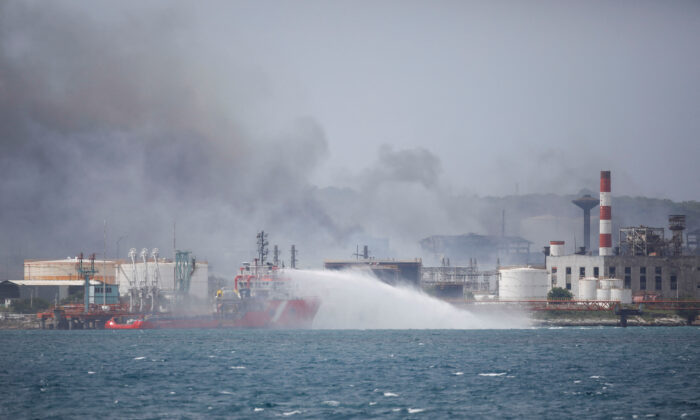 MATANZAS, Cuba—Massive clouds of steam rose from Cuba’s largest fuel depot in Matanzas on Wednesday as firefighters, helicopters, and boats poured water and foam on the smoldering remains of the largest fire in the island’s history.

Black charcoal covered with white ash remained red hot after the flames died down. One firefighter was confirmed dead, five remain in critical condition, and 14 were unaccounted for since blast on Saturday, according to authorities.

“We can now say that the fire is controlled,” Lt. Colonel Alexander Avalos, deputy chief of the firefighters tackling the blaze, told the media at the scene. “Already today we feel calmer although we still have to (completely) extinguish it and that will not be today.”

The depot is part of the Matanzas Super Tanker Port, the largest for receiving crude oil and fuel imports. Cuban heavy crude, as well as fuel oil and diesel stored in Matanzas in 10 huge tanks, are mainly used to generate electricity on the island.

Lightning struck one fuel storage tank on Friday evening. A fire spread to a second by Sunday and engulfed the four-tank area on Monday, sparking huge explosions, despite efforts by local firefighters supported by Mexican and Venezuelan reinforcements, equipment, and supplies.

Some local residents who evacuated to the homes of friends and family returned on Wednesday despite authorities’ warnings to stay put.

Dioni Perez, 43, who lives in the small town of La Ganadera, less than a mile from the port, said unlike many neighbors he preferred not to leave in the first place for fear his livestock would be stolen.

“I felt very scared because there were a series of very strong explosions,” he said. “I had never seen fireballs like that and I felt the heat.”

The fire dealt a blow to Cuba’s ability to store and move local and imported crude around the island.

The communist-run country, under heavy U.S. sanctions, is all but bankrupt. Frequent blackouts and shortages of gasoline and other commodities already had created a tense situation with scattered local protests following last summer’s historic unrest in July.

“The damage is going to be significant because it is the fuel that generates the current of the country,” Daleis Macias Fuentes, who works for the authorities in Matanzas, said.