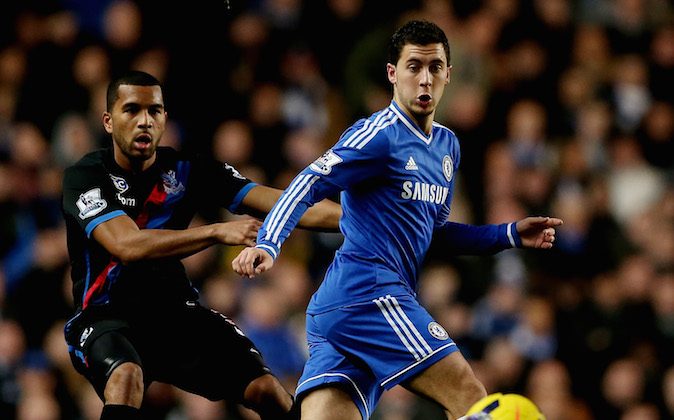 Eden Hazard of Chelsea holds off Jason Puncheon of Crystal Palace during the Barclays Premier League match between Chelsea and Crystal Palace at Stamford Bridge on December 14, 2013 in London, England. (Photo by Scott Heavey/Getty Images)
Soccer

The game will be broadcast on BBC Sport Live in the United Kingdom.

Crystal Palace will be without the injured Marouane Chamakh (hamstring) and Dwight Gayle (ankle).

What’s Next for Lukaku?

Chelsea manager Jose Mourinho is still pondering whether he should bring back Belgium international Romelu Lukaku to Stamford Bridge next season.

The powerful striker, who is currently on loan at Everton, is unsure about his short-term future as Mourinho is expected to sign a big-name forward this summer. Lukaku has been instrumental in Everton’s excellent season so far, scoring 12 goals in 23 matches for the Toffees.

Many Premier League clubs including Tottenham have reportedly shown their interests in signing the highly rated player that Chelsea signed for 17 million pound ($28 million) three years ago, and Newcastle manager Alan Pardew is among the forward’s admirers.

“I think he is a player a lot of clubs will be looking at in the summer. I don’t think Everton will get a free run at him,” Pardew said.