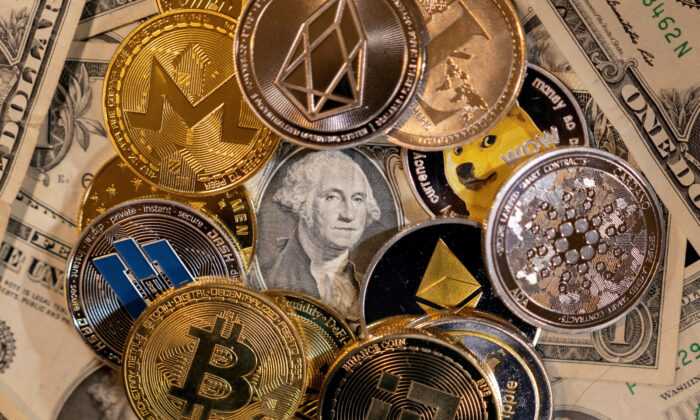 Representations of virtual cryptocurrencies are placed on U.S. Dollar banknotes in this illustration taken on Nov. 28, 2021. (Dado Ruvic/Reuters)
Australia

A Melbourne woman received quite the surprise when she discovered that nearly AU$10.5 million ($7.2 million) was accidentally deposited into her bank account by the digital currency app Crypto.com.

The Singapore-based company discovered during a December audit that it had mistakenly refunded AU$10.47 million to Thevamanogari Manivel in May 2021, when it was attempting to issue a refund of just AU$100 ($70).

According to court documents (pdf), the incident happened after an account number was accidentally entered into the payment amount field by an employee instead of the AU$100 amount.

However, the mistake was not realized by the company until months later by which time Manivel, with some help from her sister, Thilagavathy Gangadory, had already gone on quite a spending spree.

She also failed to notify Crypto.com of the mistake.

Crypto.com, which lost roughly $34 million worth of cryptocurrency in a hack earlier this year, has filed a lawsuit against Manivel and her sister seeking the return of the millions of dollars.

But according to the lawsuit, Thevamanogari Manivel has already spent some of the money, transferring $10.1 million into a joint account, and another $430,000 to a joint account with her daughter.

“It is established that the Craigieburn Property was acquired with funds traceable to the Wrongful Payment and would never have been in Gangadory’s hands if the wrongful payment had not been made,” lawyers for Crypto.com wrote in the lawsuit. “Thus, Gangadory was unjustly enriched by receiving the purchase price of the Craigieburn Property out of the Wrongful Payment, and the first plaintiff is entitled to recover an amount representing that price.”

The court froze Manivel’s bank account in February this year. However, Victoria’s Supreme Court has now ordered that the million-dollar property be sold and that Manivel return the money to the company.

The case is set to return to court in October and court documents state that Gangadory was “seeking legal advice.”

“There’s no doubt that if you saw that in your account you would know it shouldn’t be there, and the onus is actually on you to actually call the sender and to say look that shouldn’t have come into my account,” Justin Lawrence, a partner at Henderson and Ball lawyers, told 7NEWS.