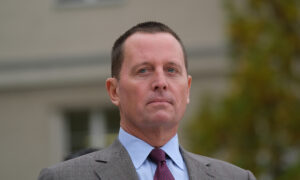 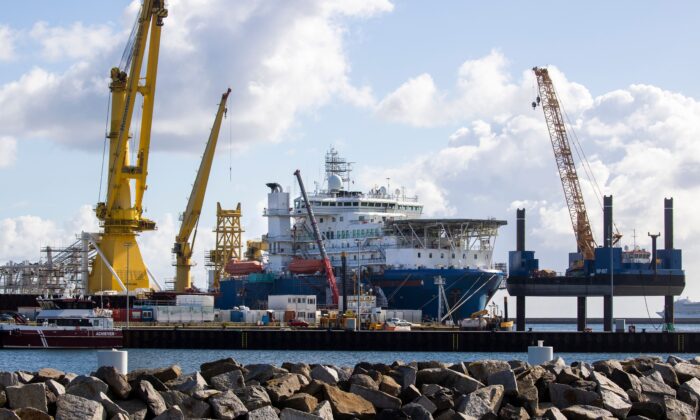 The Russian pipe laying vessel Akademik Cherskiy is moored in the port of Mukran near Sassnitz on the Baltic Sea island of Ruegen, north eastern Germany, on Sept. 7, 2020, as it waits to continue pipe laying works for the Nord Stream 2 natural gas pipeline. (ODD ANDERSEN/AFP via Getty Images)
Congress

The Biden administration’s silence on adding new sanctions on Russia over its Nord Stream 2 project has generated pushback from lawmakers who argue the project is a “gift” to the Kremlin, with devastating implications for U.S. national security and for the energy security of its European allies.

A congressionally mandated report on the pipeline released by the State Department on Feb. 19 failed to mention new sanctions on Russia and also failed to mention Germany and other European entities that have been involved with the construction of the natural gas pipeline. Sen. Ted Cruz (R-Texas), a member of the Senate Foreign Relations Committee, said of the report that it was “startling to see the Biden administration begin by handing Putin a victory he has been building towards for over a decade.”

“There is no coherent legal justification for this report,” Cruz said in a Feb. 20 statement. “Congress has mandated sanctions not just against vessels installing pipes for Nord Stream 2 but against vessels that engage in related pipelaying activities, insurers of those vessels, and companies providing certification services.

“Publicly available tracking information indicates that Russian President Putin has successfully revived the project and is now within months of finishing it,” he added. “The Biden administration is signaling it is willing to let the pipeline be completed, with catastrophic implications.”

Nord Stream 2 is a project aimed at connecting Russia and Germany through offshore natural gas pipelines. Russia would then be able to better provide natural gas to European nations. The United States has long opposed the project, asserting it would allow Russia to pressure countries if it could cut off energy to them.

State Department spokesman Ned Price reiterated that view in Washington on Feb. 19, but indicated the Biden administration is reluctant to impose sanctions if the displeasure is ignored. This follows the administration’s abrupt termination of the U.S.-Canada Keystone XL oil pipeline over climate change concerns.

“If you are serious about imposing costs on Putin, sanction any entity involved in the Nord Stream 2 pipeline. It’s time for action, not cheap talk,” said Sen. Tom Cotton (R-Ark.) in a Feb. 9 Twitter post.

White House press secretary Jen Psaki said in January that Biden believes the Nord Stream 2 natural gas pipeline is a “bad deal for Europe” and that they will review restrictions on the project.

The Biden administration, in its report, identified a Russian ship and a company it believes are helping to build the Nord Stream 2 pipeline. But the entities had already been sanctioned by the Trump administration.

“Simply put, today’s sanctions designations are wholly inadequate,” Rep. Michael McCaul of Texas, the top Republican on the House Foreign Affairs Committee, said in a statement. “Allowing this pipeline to be completed would be nothing short of a victory” for Russian President Vladimir Putin.

The pipeline is more than 90 percent complete and Russia’s state energy company, Gazprom, and its Western partners are hoping to finish it this year. Much of the remaining work is difficult and in deep waters off Denmark.

The previous two U.S. presidents, Republican Donald Trump and Democrat Barack Obama, had opposed the project as it would bypass Ukraine, through which Russia has sent gas to Europe for decades. That could deprive Ukraine of lucrative transit fees and potentially undermine its struggle against Russian aggression.

Sen. James Risch (R-Idaho), ranking member of the Senate Foreign Relations Committee, said in a statement that he’s “deeply troubled and disappointed” by the Biden State Department report, noting that there has been bipartisan progress in opposing the pipeline.

“Congress has passed multiple bipartisan laws regarding this project, and specifically broadened the mandatory sanctions to include the types of pipe-laying activities occurring right now,” Risch said on Feb. 19. “The administration’s decision to ignore these activities demands an immediate explanation.”

“Democrats criticized the previous administration extensively on Russia but that same administration imposed significant sanctions on Russia for its malign influence including for Ukraine, the Skripal attack in London, and on Nord Stream 2 specifically,” he said.

“This report is a gift to the Russians and their ongoing efforts to undermine European energy security, destabilize Ukraine, and facilitate corruption and malign influence throughout Europe.”