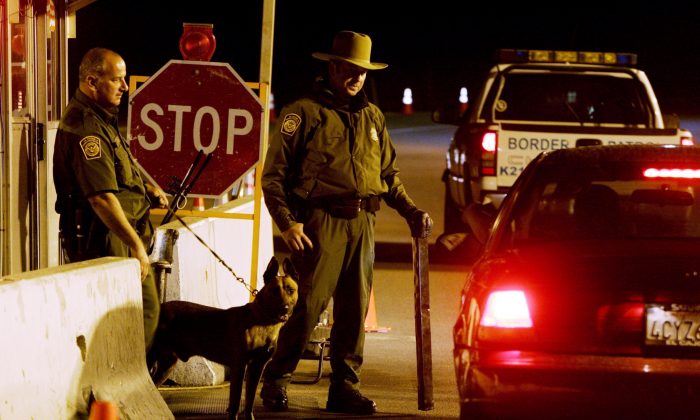 Customs and Border Patrol agents prepare to question a motorist at a checkpoint in Campo, California, in an undated file photo. (Sandy Huffaker/Getty Images)
Republicans

Customs and Border Protection (CBP) confirmed on Wednesday that some highway checkpoints in Arizona are closed.

A CBP spokesperson told The Epoch Times in an email on March 10 that the checkpoints were closed in January “due to shifting trafficking patterns … Specifically an increase in single adults in the Tucson and Three Points stations. A skeleton presence remained for security. Recently, the equipment has been removed from the sites to free up those agents to return to law enforcement duties.”

“We expect to reopen these checkpoints as manpower and activity levels dictate,” the spokesperson added.

The spokesperson didn’t say how many checkpoints are closed, though various media reports say three of them have been shut down.

“Surges tend to respond to hope, and there was a significant hope for a more humane policy after four years of pent-up demand,” Jacobson said.

Jacobson reiterated that the U.S.–Mexico border is “not open,” while also expressing a desire to “expand safe and legal avenues to the United States.”

“We are trying to convey to everyone in the region that we will have legal processes in the future … But at the same time, you cannot come through irregular means. It’s dangerous and the majority of people will be sent out of the United States because that is the truth of it,” she said.

Texas Gov. Greg Abbott authorized the deployment of 500 National Guard troops to the southern border due to the significant increase in illegal immigration.

Sen. Ted Cruz (R-Texas) and Sen. Josh Hawley (R-Miss.) on March 9 criticized the Biden administration in response to a report that CBP had shut down three highway checkpoints in Arizona.

“How much more will it take for the Biden administration to admit there is a crisis on the border?” Cruz wrote on Twitter on March 9, citing a tweet about the development in Arizona.

“The border is approaching full-blown crisis, and the Biden admin’s response is … nothing,” Hawley wrote on Twitter on March 9.