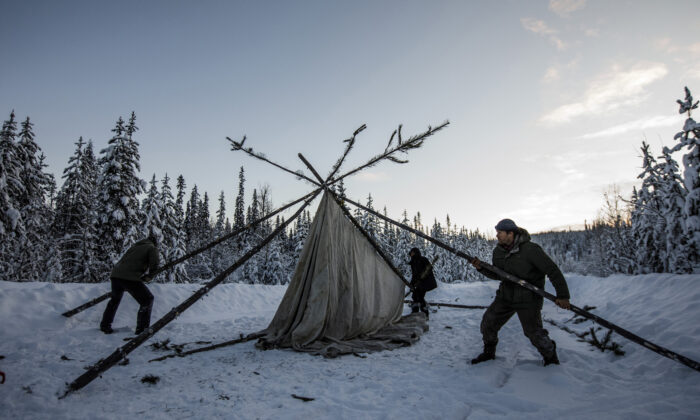 Supporters of the Wet'suwet'en hereditary chiefs and who oppose the Coastal Gaslink pipeline set up a support station at kilometre 39, just outside of Gidimt'en checkpoint near Houston B.C., on Jan. 8, 2020. (Jason Franson/The Canadian Press)
Canada

The B.C. Prosecution Service has proceeded to press criminal contempt charges against four more protesters who allegedly defied an injunction passed in 2018 that protects the construction of a liquefied natural gas pipeline in northern B.C.

The ruling by Crown prosecutor Tyler Bauman at the B.C. Supreme Court on July 7 brought the total number of people facing criminal contempt charges for their role in blocking access to the Coastal GasLink pipeline to 19.

The Crown had prosecuted 15 others on June 1. Crown lawyer Trevor Shaw told Supreme Court Justice Marguerite Church at the time that prosecutors needed another four weeks to decide whether to charge 10 additional protesters with criminal contempt related to the blockades and actions last fall opposing the pipeline, reported the CBC.

In total, 27 people were arrested over a period of six days between September 2021 and November 2021, two of whom the Crown decided not to charge due to evidentiary reasons.

Among the four who learned about their charges on July 7 was Sleydo’ Molly Wickham, a member and spokesperson of the Gidimt’en Clan of the Wet’suwet’en Nation, the Tyee reported.

If completed, the 670-kilometre pipeline would transport natural gas from Dawson Creek in northeastern B.C. to Kitimat on the Pacific coast. Almost all of the route has been cleared and nearly one-third of the pipeline has already been installed.

The pipeline has the support of 20 elected First Nation governments along the route, including the elected governments of the Wet’suwet’en Nation and Haisla Nation. But it’s opposed by the Wet’suwet’en hereditary chiefs and environmental activists, whose protests against the pipeline spread to other parts of the country in early 2020, in many cases with protesters setting up blockades on railroads.

In December 2018, Coastal GasLink obtained an interim injunction issued by Church that would allow its employees safe access and construction of the project. However, the move did not deter “numerous violations” of the injunction “from individuals who have engaged in escalating disruptive and dangerous actions” ever since, according to the company in a press release on July 7.

Members of the Gidimt’en Clan have responded to the injunction by setting up an occupation 44 kilometres down the Morice Forest Service Road, which provides access to the pipeline.

In a ruling related to the interim injunction, Church noted that Wickham has been a strong opponent of the pipeline project.

“One of the individuals who identifies with the KM 44 Blockade, Molly Wickham, has made public statements indicating that their occupation of the land is for the purpose of preventing [Coastal GasLink] from completing the work necessary to obtain permits and authorizations and to ultimately prevent the Pipeline Project from being constructed,” she wrote in her ruling in January 2020.

In February, the RCMP said about 20 protesters, some armed with axes, attacked Coastal GasLink security guards and smashed their vehicle windows.

During the court appearance on July 7, there were five other protesters who also learned they will not face criminal charges for their arrest on Nov. 19, 2021. Bauman said the decision not to press charges against them came down to how the RCMP read the injunction to them that day.

“The script read by the RCMP was limited to road blocking and did not include the broader language of the injunction, which is significant because of this court’s decision in Teal Cedar Products Ltd. v. Rainforest Flying Squad,” Bauman said.

“The actions of the defendants did not involve blocking the roadway, even if they may otherwise have been in breach of the injunction.”

Bauman said while the five would not likely fall under criminal contempt charges, Coastal GasLink could consider bringing civil court cases against them.

The next court appearance is scheduled for July 28, at which Coastal GasLink can decide whether or not to pursue legal actions against them. As for the four who learned of their charges, the Crown will announce their sentencing then.