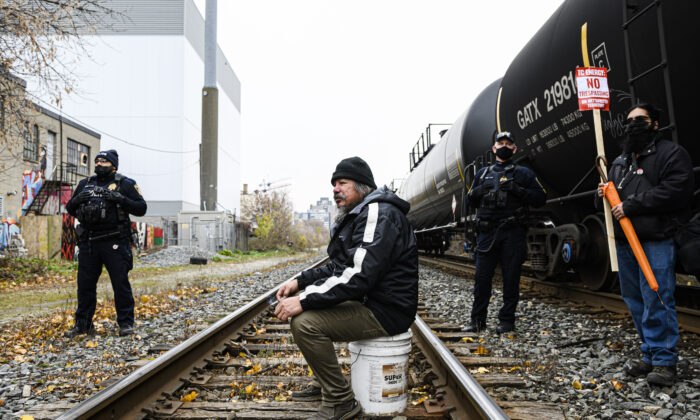 A man blocks a rail line in support of Wet'suwet'en protesters who were arrested by the RCMP in northern B.C., in Toronto on Nov. 21, 2021. (The Canadian Press/Christopher Katsarov)
Canada

The conflict in northern B.C. over the Coastal GasLink pipeline caught greater international attention on Nov. 22 when Hollywood star Leonardo DiCaprio chimed in, posting on Twitter a video of RCMP officers confronting indigenous activists opposed to the pipeline.

“After setting up a blockade to protect their land, community, and sacred headwaters Wedzin Kwa from Coastal GasLink’s planned fracked gas pipeline, the Wet’suwet’en Nation has faced militarized raids from the RCMP. We must protect the rights of land defenders,” DiCaprio said in the tweet.

The post drew rebuke from B.C. Liberal MLA Ellis Ross, a former chief councillor of the Haisla Nation, who told DiCaprio on Twitter: “You have no idea what you’re talking about.”

“Give me a call. I’ll tell you the other side of the story as an aboriginal leader who was on the front of this project from day one,” said Ross.

The confrontation on Nov. 18 was the third time in three years that the RCMP has enforced a court order against blockades set up by supporters of the Wet’suwet’en Nation hereditary chiefs opposed to the construction of the liquefied natural gas pipeline.

The Wet’suwet’en are governed by both a hereditary chief system and elected band councils.

The pipeline has the support of 20 elected First Nation governments along the route, including the elected governments of the Wet’suwet’en Nation and Haisla Nation. But it’s opposed by the Wet’suwet’en hereditary chiefs and environmental activists, whose protests against the pipeline spread to other parts of the country in early 2020, in many cases with protesters holding blockages on railroads.

The 670-kilometre pipeline would transport natural gas from Dawson Creek in northeastern B.C. to Kitimat on the Pacific coast. Almost all of the route has been cleared and nearly one-third of the pipeline has already been installed.

Members of the Gidimt’en clan, one of five in the Wet’suwet’en Nation, set up blockades on the Morice Forest Service Road south of Houston, B.C., on Nov. 14 despite a 2019 court order not to do so. On Nov. 18, the RCMP enforced the injunction and arrested 14 people and another 15 the next day. Two journalists were among those arrested, prompting an open letter from the Canadian Association of Journalists to Public Safety Minister Marco Mendicino to condemn the arrest.

In a statement on Nov. 18, RCMP Assistant Commissioner Eric Stubbs said “significant efforts to facilitate meaningful dialogue” had failed and a breakup of the blockade was necessary so that Coastal GasLink workers stuck in their camp, including Wet’suwet’en band members, could get out, as their “provisions were at critical levels.”

The journalists were among 11 people who had barricaded themselves inside structures and were given the opportunity to leave before “police forced open the door and began to arrest those inside,” Stubbs said in a Nov. 22 statement. He noted it was only at that point that “the individuals then identified themselves as journalists” and that “the RCMP did not arrest anyone for being a journalist or detain anyone for performing their job.”

All those arrested at the protest site were released with conditions on Nov. 24.

‘Long and Complex Processes of Consultation’

On Nov. 14, the elected government of the Wet’suwet’en First Nation issued a statement saying, “We want to make it absolutely clear that the actions of a few members of the Gidimt’en Clan who claimed to evict Coastal GasLink and the RCMP … do not represent the collective views of the Clan or of most Wet’suwet’en people.”

“We went through long and complex processes of consultation with our members, government, and the industry before agreeing to participate [in the pipeline]. Despite numerous opportunities to work together, the small group of hereditary chiefs who oppose the project … refused to engage and neither they, nor their non-Indigenous supporters, have offered any meaningful alternatives.”

Over a year earlier in 2020, the B.C. and federal governments had reached a Memorandum of Understanding with the Wet’suwet’en hereditary chiefs that called them “equal” to the governments of B.C. and Canada, and the B.C. provincial government gave the hereditary chiefs $7.22 million to support the implementation of Wet’suwet’en title and rights. Immediately thereafter, five elected band councils of the Wet’suwet’en Nation said they were unaware of the proceedings apart from one preliminary meeting. They said the MOU “lacked any semblance of credibility” and called for its withdrawal.

Ken Coates, Munk Senior Fellow in Aboriginal and Northern Canadian Issues with the Macdonald-Laurier Institute, says provincial and federal governments are playing catch-up, as attempts by B.C.’s First Nations to gain treaties were rebuffed for decades, from 1870 to 1990.

“For 120 years they stalled and did everything they could to stop it from actually happening. So what happened is British Columbia and Canada are basically facing a problem of their own creation,” Coates said in an interview.

Coates, however, said the MOU was “unhelpful to the extreme” and a step backward.

“How would you like it if there was somebody out there presenting themselves as representing your decision and you’ve not formally agreed that they will be the ones doing that work for you? … Well, you’d kind of be appalled.”

Coates doubts those holding solidarity protests have the full picture.

“The national story that’s getting out there is very, very one-sided, and I don’t think there’s any other case in recent memory where essentially a small group of hereditary chiefs to be sure has garnered all of the attention away from the elected officials,” he said.

“Hereditary chiefs have a very clear cultural role and political role within their communities. That part is unchallengeable. The question is, are the current hereditary chiefs exercising that properly?”

A communications account called Gidimt’en Checkpoint has shared the pro-hereditary chief, anti-pipeline message in recent weeks. The Epoch Times reached out to its admin on Facebook for an interview but without success.

However, an unnamed admin on the account messaged back to say: “The people involved in the land defence project are not protesters. The people holding rallies and actions in support of the land defence, are protesters… The supporters who have been on the land [are] assisting in upholding ‘Anuc niwh’it’en (Wet’suwet’en Law).”

Chris Sankey, a B.C. indigenous supporter of the energy industry, recently tweeted: “These Activists from outside Canada, who are collaborating with University Professors and Non Government Organizations from Ontario & British Columbia are not our friends. Nobody in their right mind would seek to damage their own people and Canadians at large.”

Coates said it’s not up to outsiders, including himself, to tell the indigenous people what they should do.

“[It’s] environmental colonialism. So environmentalists have become the 21st-century equivalent of the missionaries. They’re going up there and telling indigenous people what to do and what to believe,” he said.

“These people can think for themselves. … The intervention of outsiders has actually created enormous, enormous division that is really hurting the communities.”