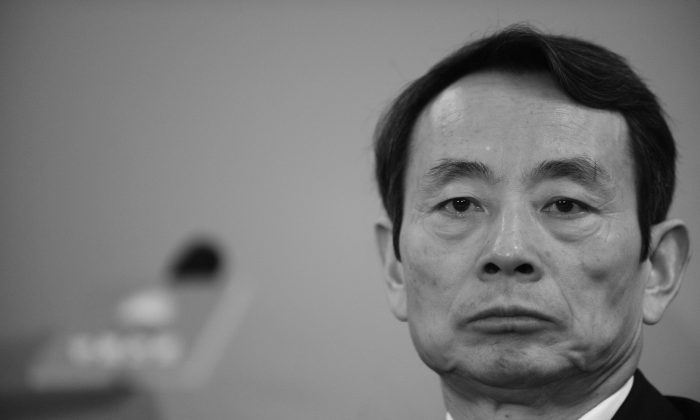 Three officials with ties to the former leader of the Chinese Communist Party have been punished in the span of five days. For corruption, one was sentenced to jail for 13 years, and another for 16. The third was placed under an internal Party investigation for “severely breaching Party discipline.”

The officials were Li Chuncheng, a former No. 2 of the southwestern Chinese province of Sichuan; Jiang Jiemin, who once headed the agency that oversees state-owned firms, and for many years helmed China National Petroleum Corporation, the country’s largest oil and gas company; and Su Shulin, the former governor of Fujian Province in southern China. Before that, Su was the top leader of oil refining giant China Petroleum & Chemical Corp., better known as Sinopec.

All three are connected to officials closely associated with Jiang Zemin, the Party boss from 1989 to 2002, but who held power behind the scenes for almost the next decade, according to political observers.

The removal of these officials are part of the broad campaign by Chinese leader Xi Jinping to regain control over sectors of the economy and government that had been divided up and handed out by Jiang Zemin’s political network.

The announcement of the punishment of Li Chuncheng and Jiang Jiemin was carried by Chinese state-run media on Oct. 12. Both men were required to hand over 1 million yuan in personal assets and were penalized with their respective jail terms for taking bribes and abusing power.

Li had reportedly accepted 39.8 million yuan in bribes between 1999 and 2012, while Jiang was found to have been bribed with assets worth over 14 million yuan, according to state media. (Analysts of Chinese politics generally believe that official reports considerably discount the actual size of the transactions.)

Su Shulin has not yet been punished, but the announcement by the Central Commission for Discipline Inspection, the Party’s investigative body, indicates that he will almost certainly be found guilty of corruption and sent to prison.

The removal of these officials are part of the broad campaign by Chinese leader Xi Jinping to regain control over sectors of the economy and government that had been divided up and handed out by Jiang Zemin’s political network, which carried through to the former administration of Hu Jintao. Thus far, the security apparatus, the military, the state asset sector, and the energy sector have all seen multiple purges, beginning in late 2012 when Xi Jinping rose to power.

For many years, the oil industry had been largely in the hands of officials associated with Jiang Zemin. Two of the most prominent names are Jiang Jiemin (no relation to Jiang Zemin) and Zhou Yongkang, the purged former security czar who headed China National Petroleum Corporation before Jiang Jiemin.

Beginning in 2013, the new Party leadership began a purge of the oil industry, removing a series of Zhou loyalists before their attention turned to Zhou himself.

Jiang Jiemin was investigated by the Party’s anti-corruption agency in September 2013, about half a year after he took his last office as head of the China State-Owned Assets Supervision and Administration Commission. Jiang reportedly provided immense financial support to Zhou Yongkang and his family through Swiss bank accounts, according to the Hong Kong-based newspaper Apple Daily.

Liao Yongyuan, a protégé of Jiang Jiemin and former president of China National Petroleum Corporation, was investigated in March by anti-corruption authorities. Liao was given the moniker “Northwestern Tiger” in the company. A little over six months later, “Northeast Tiger” Su Shulin was also purged.

It’s likely no accident that one of the hallmarks of the political era of Jiang Zemin was also emphasized in the major oil companies when these officials were at the helm.

Liao was only 37 when he assumed his first major post as general manager of PetroChina’s Tarim Oilfield. After leaving his last oil industry post in 2011, Su made deputy governor, then full governor and deputy Communist Party secretary of Fujian Province at age 49.

Both men were close cronies of the former Politburo Standing Committee member and vice chairman of the Chinese regime Zeng Qinghong, according to Deutsche Welle. Zeng is widely known to be Jiang Zemin’s political enabler and ally since before the ex-Party head came to power, from their base in Shanghai.

It’s likely no accident that one of the hallmarks of the political era of Jiang Zemin was also emphasized in the major oil companies when these officials were at the helm.

Minghui.org, a clearinghouse for information about the persecution of Falun Gong, is replete with reports about how staff members of the oil companies that practice the traditional Chinese spiritual discipline are subject to brutal persecution.

One of the most prominent examples of persecution came when Su Shulin helmed an oilfield in Daqing in the northeastern province of Heilongjiang.

Wang Bin, a computer engineer at the Daqing City Oil Field Exploration and Development Institute, was sent to a labor camp in the city and brutally tortured in September 2000 when he refused to give up his faith.

There are no indications in the Minghui articles that those officials ordered the treatment of the individuals. It is known, however, that those around Jiang Zemin were promoted through the ranks for their harsh treatment of Falun Gong, and the descriptions of persecution in Minghui conform to this pattern.

In the case of Wang Bin, torturers shoved cigarette butts into his nostrils, ruptured a major artery in his neck, and fractured several of his bones, according to Minghui. In the end, Minghui reports, Wang was beaten to death.

Frank Fang and Jenny Li contributed to this report.