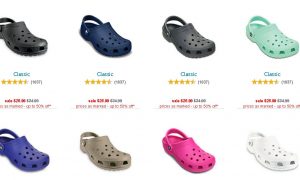 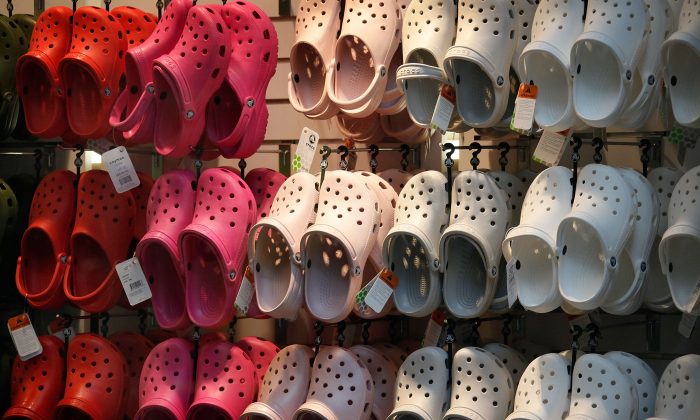 Crocs footwear is displayed in one of the company's retail stores in Chicago, Illinois, U.S. on July 23, 2009. (Scott Olson/Getty Images)
Companies

Crocs to Cut Chinese Production for US Market

Crocs Inc will aim to cut the volume of its shoes and accessories produced in China for the U.S. market by more than two-thirds over the next year, as it guards against the impact of President Donald Trump’s trade war with Beijing.

The casual footwear maker’s rubber designs have made it a popular choice over the last decade among older Americans looking for functional footwear for gardening or the beach. It has also become trendy in the past year with millennials as ironic “ugly” fashion.

Crocs also said it will have to wear costs of $5 million over the next year, assuming a 25 percent tariff takes effect on Aug. 1. The company made $1.09 billion in sales last year and earned about $50.4 million.

“Our current sourcing mix reflects our need to balance ramping up incremental supply to meet the growing demand for our product and continuing our multi-year effort to reduce our sourcing from China,” the company said in a statement ahead of an industry conference on June 11.

Crocs, which typically sources footwear from several third-party manufacturers, primarily in Vietnam and China, said it would source less than 10 percent of U.S. products from China by 2020 compared to about 30 percent currently.

Last month, companies including Crocs, Nike Inc and Under Armour, urged Trump to remove footwear from a proposed list of additional tariffs that would impact $300 billion worth of Chinese goods.

Shares of the company were up 3 percent at $19.85 in early morning trading.