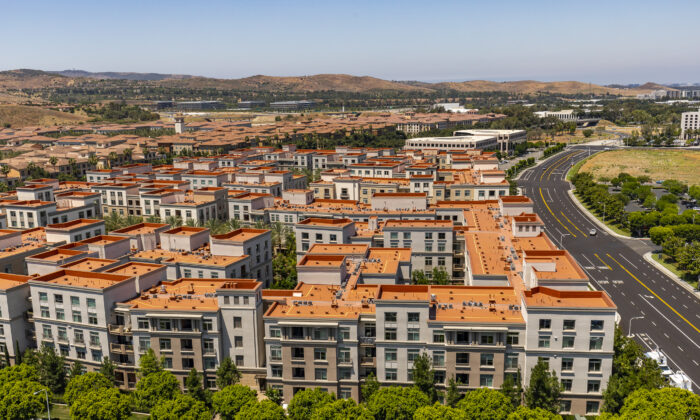 “Middle-income housing,” also known as “workforce housing,” are residential units rented out at below-market rates to the “missing middle”—renters who are earning too much to qualify for traditional affordable housing, yet not enough to afford market rates.

On Feb. 22, the Irvine City Council passed a proposal to purchase the Royce Apartments with 520 units on Michelson Drive and convert them into workforce housing. The councilmembers voted 3–1 to work with the California Statewide Communities Development Agency (CSCDA) on moving the proposal forward.

The process involves the city and the statewide development agency, which operates tax-exempt bond programs designed to create middle-income housing, joining a joint power authority (JPA). According to the proposal, the JPA can issue 35-year tax-free bonds to purchase the apartment complex. Since the JPA is a non-profit entity, it can finance the bonds at an interest rate lower than what the market can get, allowing more funds to go into the housing project.

During the 35 years before the tax-free bonds were paid off, the city forgoes property taxes originally coming from the apartments—in exchange for lower rents for tenants. After the bonds are paid off in 35 years, the city officially owns the property, which the city can then decide to sell, transfer, or keep.

The total proposed cost for the Royce Apartments is $398.8 million, which comes out to almost $767,000 per apartment unit.

The city would lower rents at rates depending on the apartment size, which varies between studio up to a 2-bedroom, as well as potential residents’ income.

Critics of workforce housing say the potential benefit of helping out a small portion of the city’s renters pales in comparison to the cons of the deal.

John Moorlach, a former California State Senator who helped Orange County out of bankruptcy in the 1990s, said buying hundreds of millions of dollars of properties at the height of the market could spell financial trouble for the city.

Irvine is in a better financial position than other Orange County cities, Moorlach said, yet the proposal is still only a “feel-good solution,” as the city will be losing tens of thousands of dollars each year just to create a small amount of savings for a small group of people.

“Real estate prices are at historical highs … So there’s a good chance that there could be a down cycle, especially with factors like Ukraine, inflation, rising interest rates, etc. So it would be really awkward if the city purchased the property at the highest price in recent history, and some of these recessions can last for a long time,” Moorlach said. “All you’re doing is maybe reducing rents by a few hundred dollars per month.”

With the workforce housing project moving forward, Irvine itself would be set to lose $77,000 per year from the Royce Apartments, though other taxing entities would lose money as well.

He also noted the loss of property tax dollars will be felt the most by the Irvine Unified School District, which he says is already not in a strong financial position.

Jim Righeimer, former mayor for the neighboring city of Costa Mesa, called the idea of workforce housing a “farce,” saying that no affordable housing is actually being created. Costa Mesa has been rejecting similar proposals for middle-income housing.

“They haven’t created a single unit [of housing],” Righeimer said. “They were already rented. They already had people living there.”

According to the proposal, the city expects all units of the Royce Apartments to become income-restricted within five years through “natural turnover”, which means no existing residents will be forced out by this conversion. However, it is unclear how this will be achieved.

“All it is financial alchemy. Nothing gets created and [elected officials] pat themselves on the back and say, ‘We did it,’ and they didn’t do anything,” he said.

In response to the argument that the city is purchasing buildings at the height of the real estate market, Irvine Councilman Anthony Kuo said he believes it’s speculative that Irvine’s market will correct.

“Yes, there are different real estate cycles,” he said. “But if you look at property values in Irvine, with the exception of a couple of plateaus, there really has not been a dip in property values. So I think we’re in a little bit of a unique situation.”

Kuo, who was a “Yes” vote on both proposals, said agencies that will lose out on property tax—including the Irvine Unified School District—will have an opportunity to get backfilled by the state.

“The issue of various agencies including the city losing out on some property tax is that all of the agencies have opportunities through the state to get those monies backfilled,” Kuo said. “The local school districts can make that application to the state, so they are in a position to be made whole.”

While no new units are being built, Kuo said at least something is being done to help middle-income renters.

“I think that it’s very easy to criticize something and say, ‘Well, you’re not doing enough,’” he said. “Generally individuals who offer that criticism, the alternative is to not do anything. And that’s not where we are at this point.”

On the same day, there was another housing proposal to acquire and convert the 563-unit Toscana Apartments on Via Lucca into middle-income housing. The council voted 3–1 to direct staff to get a better deal on the Toscana complex, which the city manager can finalize once a deal is agreed upon.

The total proposed cost for the Toscana Apartments is $405.4 million, which comes out to $591,500 per apartment unit.

For the Toscana proposal, Irvine itself would be set to lose $50,000 of property tax per year.

Middle-income housing projects have been proposed in cities throughout California. In Southern California, cities that approved similar proposals include Anaheim, Huntington Beach, Long Beach, and Pasadena whereas Costa Mesa, Fullerton, and San Diego declined to participate.