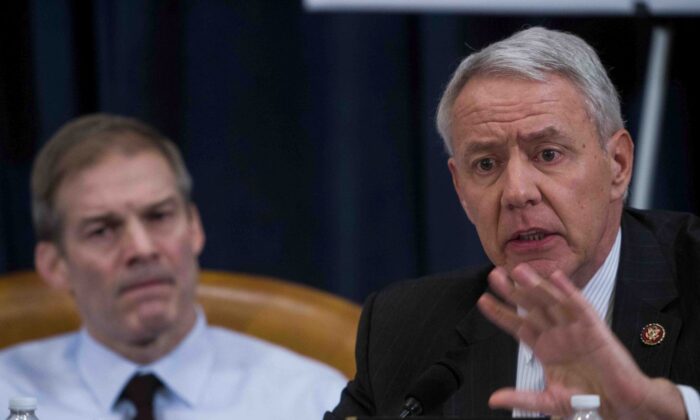 Rep. Ken Buck (R-Colo.) wants the U.S. armed forces to be more focused on “military readiness, not military wokeness” and hopes to put an end to the “dangerous and divisive” critical race theory being taught to servicemen and women.

Buck is just one of many Republican lawmakers who oppose critical race theory (CRT) over fears that peddling the Marxist theory to service members will only serve to reduce both their cohesion and combat effectiveness when it comes to fighting real threats facing the United States, such as those posed by terrorist groups.

CRT adherents generally believe that the United States is systemically racist, that racial oppression exists, and that institutions that emerged in majority-white societies are racist and “white supremacist.” The theory has slowly expanded in recent decades through academia, government structures, school systems, and the corporate world.

In an interview with The Epoch Times, Buck said he believes CRT—which has become more of a central focus following the death of George Floyd while in police custody on May 25, 2020—has “no place” within the U.S. military, calling it “dangerous and divisive.”

“I think that there are political theories that are being espoused in this country, such as critical race theory, that are dangerous and divisive and have no place in the military,” he said.

“If we want to have those discussions in the private sphere, in the marketplace of ideas, we can certainly have those discussions. But to require members of the military to be trained in critical race theory and to have inclusion and diversity officers in the Department of Defense, I think undermines the necessary discipline that we need in our military to conduct business.”

Advocates of CRT, such as Gen. Mark Milley, chairman of the Joint Chiefs of Staff, have defended its teaching within the U.S. military structure, saying that he wants to “understand white rage” and that it’s important for military members to be “open-minded and be widely read.”

Buck disagreed with this sentiment, saying the military should instead be focusing its attention on “winning wars” and not spending hours and hours being trained on “social issues.”

“Any time we require hours and hours of training on diversity, inclusion, and other areas, we take away from the time that our troops are actually engaged in the activities that that will save their lives. The training is so important to them,” he said.

“I can remember talking to a general several years ago, and the Obama administration required more hours of training in a particular month than the service members worked in that month.

“In other words, more than 40 hours a week they were expected to be in this type of diversity training, and not in the field practicing and training for why they joined the military.”

Buck noted that placing too much of a burden on teaching social issues to military members can also actually widen the divide between Americans based on their race, among other things, which in turn “takes away from the cohesion that is necessary to create a unified fighting force.”

“It reduces our ability for military preparedness for all threats out there—China, which is the greatest threat to this country’s security,” he said, noting also Russia, Iran, North Korea, and terrorist groups that present a threat to the United States.