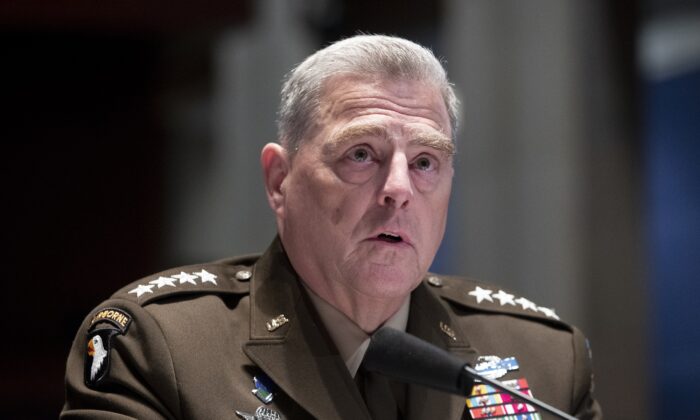 Chairman of the Joint Chiefs of Staff Gen. Mark Milley testifies during a House Armed Services Committee hearing on Capitol Hill in Washington on July 9, 2020. (Michael Reynolds/Pool via AP)
Viewpoints

Critical Race Theory Can Only Hurt the Military—and the Country

Critical race theory has now taken hold in the U.S. military. And I have to say, I find it perplexing. My father served for three decades in the U.S. Army. I grew up understanding that the military is about forming a bond, a unit, a team working toward the same goals and protecting each other while achieving them.

So, you can imagine my shock when I started to learn how seriously the leaders at the Pentagon were starting to integrate critical race theory (CRT) in their curricula. In fact, a professor at the U.S. Air Force Academy, Lynne Chandler Garcia, wrote in a Washington Post op-ed, “I teach critical race theories to our nation’s future military leaders because it is vital that cadets understand the history of racism that has shaped both foreign and domestic policy.”

As Mark Davis opined in Newsweek, “Finding such warped content in today’s liberal college classrooms is not surprising. But finding it at the U.S. Air Force Academy is unacceptable.” I couldn’t agree more.

Unfortunately, it’s not just the Air Force Academy. West Point offers a seminar class on “white rage.” The chief of Naval Operations recommends “How to Be an Antiracist” as a “foundational” text for sailors. The Navy’s reading list for sailors also includes “The New Jim Crow: Mass Incarceration in the Age of Colorblindness and Sexual Minorities and Politics.” In short, the military has gone woke.

“It’s important actually for those of us in uniform to be open-minded and be widely read,” he told the House Armed Services Committee. “I want to understand white rage.”

But they’re missing a key point: Studying political ideologies of adversaries so we can better combat them is completely different than studying CRT, which divides our own people.

Cohesion and comradery, especially within small units, is absolutely crucial to military success. It’s been said that soldiers don’t fight for some general theory; they fight for the person next to them. CRT, which causes us to see each other through the lens of race and the oppressor versus the oppressed, is the antithesis of this cohesion. Simply put, it undermines our military’s effectiveness, destroying trust and taking focus away from the mission.

Soldiers shouldn’t be concerned about whether the person next to them is black or white, Asian or Hispanic. All that should matter is that they’re both Americans serving their country and they have a mission to do.

No other country is putting its military through this nonsense. They’re focusing on warfighting, which should be the top priority—preparing for and deterring war, hoping it never comes but always being ready to fight.

America, meanwhile, has become comfortable in its decadence since the Cold War, enjoying the luxury of being able to be distracted by things that cause the military to lose focus. But now with China threatening American supremacy, our military should be locked in, not studying a theory that demonizes America. What kind of message does this send to Beijing—or Moscow, Tehran, or Pyongyang?

I discuss all these issues concerning the U.S. military and critical race theory last week on my podcast, “Newt’s World.” My guest is Dakota Wood, who served two decades in the U.S. Marine Corps, retiring as a lieutenant colonel. He is currently the senior research fellow for defense programs at the Heritage Foundation.

Despite the influence of CRT, Woods still recommends young people sign up to join the military, saying there’s nothing nobler than serving a country that you love and respect. He’s right, but unless CRT is stopped, fewer young people will have the love and respect for America that is required to serve.