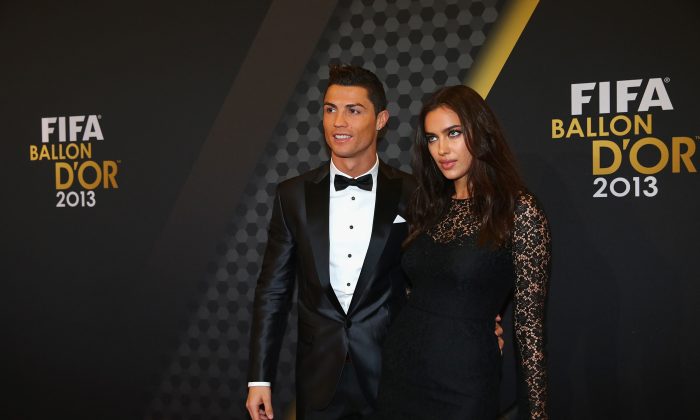 Cristiano Ronaldo’s girlfriend Irina Shayk was on the receiving end of a compliment.

Christine Teigen, a Sports Illustrated model, posted a picture of Irina Shayk’s July/August Maxim cover on her Instagram, and called it the “most beautiful issue of maxim I have ever seen, truly!!”

Ronaldo and Irina are believed to be on holiday now.

The Portuguese football superstar posted a picture of both of them standing next to a helicopter with the caption “morning ride” on Instagram.

He also uploaded a picture on Twitter with the caption: “Enjoying another great sunset.”

Ronaldo recently picked up an ESPY award for being the best international athlete.

See an AP article on the ESPY Awards show.

“Everybody helped me out along the way,” the Oklahoma City Thunder star said. “My beautiful mom watching at home who couldn’t be here. My favorite teammate, Russell Westbrook.”

Durant beat out fellow male athlete nominees Miguel Cabrera of the Detroit Tigers, Peyton Manning of the Denver Broncos and boxer Floyd Mayweather during the show hosted by rapper Drake at the Nokia Theatre.

The winners in most categories were determined by fan voting.

The best game was the Iron Bowl matchup between No. 1 Alabama and No. 4 Auburn, with the Tigers winning 34-28 on the final play to spoil the Tide’s BCS hopes.

Led by goalie Tim Howard, the U.S. men’s soccer team won best moment for its run to the round of 16 in the World Cup.

Drake zinged Howard and Sherman in his opening monologue. The rapper joked about banned Clippers owner Donald Sterling, saying, “We’re a few hundred yards from Staples Center, which is as close as Donald Sterling is allowed to get.”

Clippers star Blake Griffin laughed until the camera caught him and he acted serious, drawing laughs. Griffin and Drake teamed up for a funny pre-taped bit in which they pretended to be each other while spewing insults, with rapper Chris Brown joining in. Brown, who has been in and out of jail, jokingly introduced himself as “America’s sweetheart.”

James wasn’t on hand, but Drake noted the superstar’s recent decision to return to the Cleveland Cavaliers after winning two NBA titles in Miami.

Drake mixed in song, too. He crooned “Honorable Mention,” a tune he said was dedicated to the runner-ups, including Triple Crown loser California Chrome and NASCAR driver Danica Patrick.

Lil’ Wayne cracked up as Drake sang “Side Pieces,” full of references to the on-the-road cheating that goes on in sports. Drake noted a lot of men in the audience wanted the song to be over.

Drake revisited Sterling with a rap accompanied by video of the Clippers owner saying he isn’t a racist. The screen displayed the hashtag of Sterlingneverlovedus.

Later, Drake teamed up with WNBA star Skylar Diggins for a sketch. She went in to kiss Drake, who has acknowledged his affection for her, but the smooch landed on his forehead and not his lips.

The Arthur Ashe Courage award went to St. Louis Rams draftee Michael Sam, who announced earlier this year that he is gay. The former Missouri defensive end will be trying to make the Rams’ roster when training camp opens. If he does, Sam would be the NFL’s first openly gay player.

Sam teared up throughout his speech and his voice faltered at times.

“Great things can happen when you have the courage to be yourself,” he told the audience.

Hall of Famer Jim Brown hugged Sam on his way to the stage.

The Ashe award is named for the late tennis player who died in 1993 after contracting AIDS from a blood transfusion.

The Jimmy V Award for Perseverance was given to ESPN “SportsCenter” anchor Stuart Scott, who is fighting a recurrence of cancer first diagnosed seven years ago.

The Pat Tillman Award for Service was given for the first time to Josh Sweeney, a retired Marine who lost both his legs after an explosion in Afghanistan. He scored the lone goal for the U.S. sled hockey team that beat the Russians for gold earlier this year at the Paralympics in Sochi.