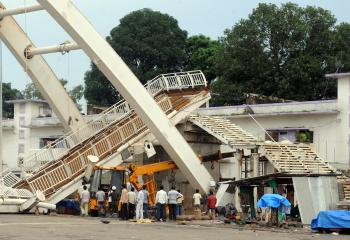 COLLAPSE: Indian workers gather after a collapsed footbridge at the Jawaharlal Stadium in New Delhi on Sept. 21, the main venue for the forthcoming Commonwealth Games. The games are set to begin Oct. 3. (Raveendran/Getty Images )
World

Stephen Jones
View profile
Follow
biggersmaller
Print
The collapse of a footbridge near the site where, in 48 hours time, some 6,500 athletes will be staying has raised concerns over the viability of the Commonwealth Games in Delhi.

The incident comes after complaints by team delegates, who say that the athletes’ accommodations are filthy and unfit for human habitation.

The Commonwealth Games, held every four years, involve teams from 51 former British Commonwealth countries in the third-largest multi-sport event behind the Summer Olympics and the Asian Games.

India was awarded the games back in 2003, but with less than 12 days to go and the majority of the athletes’ village still incomplete, many are questioning whether the event will go ahead.

The footbridge near the Jawaharlal Nehru Stadium was at a later stage of construction. At least 23 people were injured when it collapsed on Tuesday, police said.

Team leaders from England, Scotland, Wales, New Zealand, Australia, and Canada have expressed “grave concern” over the quality of the accommodation for athletes, who will start to arrive in just 48 hours time.

Much of the plumbing and electrical work remains incomplete, and the Times of India reported that just 18 of the 34 towers at the village have been completed.

When the event was awarded to India seven years ago, it was touted as a means of showcasing the country’s rising economic power.

However, the concerns over incomplete buildings have highlighted how large-scale construction projects in the country are often delayed by political infighting and corruption.

Commonwealth Games Scotland issued a strongly worded statement on Tuesday saying that the accommodation earmarked for its team was “unsafe and unfit for human habitation.”