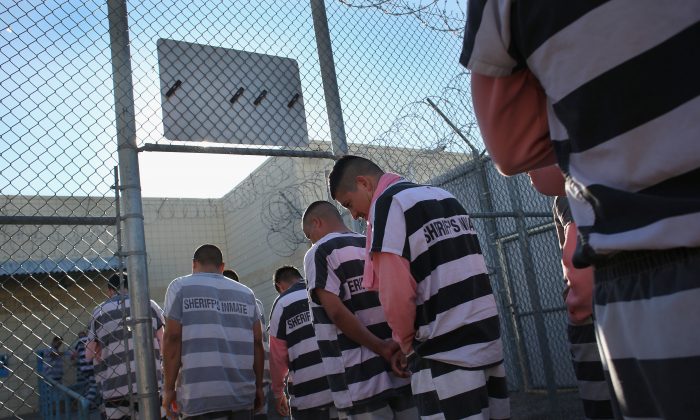 Immigrant inmates line up for breakfast at the Maricopa County Tent City jail on March 11, 2013 in Phoenix, Arizona. (John Moore/Getty Images)
US

WASHINGTON—In recent years, there has been an upsurge of discussions and legislation favoring criminal justice reform. Many experts and policymakers question whether long sentences for nonviolent drug abuse offenders is worth the annual cost to house, feed, and guard an inmate, which is about $30,000. But the benefits of reducing prison populations and other criminal justice reforms are not limited to fiscal considerations, extending to better, more humane ways for offenders to reenter their communities.

There is strong bipartisanship in demanding reform. Beginning with Texas in 2007, more than 30 states have passed legislation, by lopsided votes, approving sentencing and corrections reforms.

On Sept. 9, the American Enterprise Institute, a Washington-based conservative think tank, held a forum to discuss criminal reform, and some options based on the latest research on reducing incarceration, effective policing, rehabilitation approaches, and strengthening relationships between law enforcement and communities.

“Too often our prisons are clogged with nonviolent offenders who are serving exceedingly lengthy sentences,” began Sensenbrenner.

“It’s not just the people in prison who are paying the punishment for their crime. Mass incarceration tears families apart, and deprives children of their fathers and mothers. It likely means loss of a job, possibly a home and any support he or she had within the community,” he said.

Too often our prisons are clogged with nonviolent offenders who are serving exceedingly lengthy sentences.
— Rep. Jim Sensenbrenner (R-Wis.)

His SAFE bill would reserve drug mandatory minimum sentences for the leaders, managers, supervisors and the high-level supplier rather than low-level offenders.

The road we are on now of locking up people is “not only fiscally unsustainable but morally irresponsible,” he concluded.

The moderator, Steven Teles, associate professor of political science at Johns Hopkins University, said that 15 or 20 years ago it would have been unheard of for someone like Sensenbrenner to make the speech he did.

The situation Sensenbrenner addressed seems to have spiraled out-of-control. From 1980 to 2013, the prison population in the federal prison system increased from 24,363 to 215,866, according to Bureau of Justice Statistics, cited in a PEW Charitable Trusts fact sheet. Sensenbrenner frequently referred to the growth of the federal criminal code as a contributing factor. The estimated number of federal crimes in statute in 1980 was 3,000; in 2013, it had grown to 5,000.

Federal sentencing laws enacted during the 1980s and 1990s resulted in more drug offenders going to prison and staying longer—54.6 months in 1980 versus 74.2 months in 2011. Mandatory minimum sentencing laws were designed for the serious traffickers but resulted in “lengthy imprisonment of offenders who played relatively minor roles,” according to a PEW issue brief.

The proportion of the prison population housing drug offenders increased from 25 percent in 1980 to nearly half, 49 percent, in 2015, of all federal inmates.

To accommodate the growing inmate population, the number of prisons nearly tripled from 43 in 1980 to 119 in 2013. Consequently, corrections costs have swelled. Sensenbrenner cited data from OMB that costs from 1980 to 2103 rose from $970 million to $6.7 billion in inflation-adjusted dollars—a 595 percent increase.

The proportion of the prison population housing drug offenders increased from 25 percent in 1980 to nearly half, 49 percent, in 2015, of all federal inmates.
— Bureau of Justice Statistics, Bureau of Prisons, Justice Department

The states too have had to deal with the high expense of prison construction and maintenance. In some states it is their highest budget item after Medicaid.

In addition to the huge increase in costs, federal drug sentencing laws has been ineffective. “The availability and use of illegal drugs has increased even as tens of thousands of drug offenders have served lengthy terms in federal prisons,” concludes the PEW issue brief. Some say that as one offender is sent to prison, someone else is replacing him on the street.

As a deterrent, longer sentences have had no effect on the recidivism rates for drug offenders, which at about 29 percent, remains unchanged for decades.

Adam Gelb, from Pew Charitable Trusts, said that it was undeniable that the increased incarceration was one factor, contributing 25 percent to the drop in crime since the early 1990s. The interesting aspect of the crime drop though is the other 75 percent, which involves better policing, government policy, and other factors, some of which are not fully understood. Gelb pointed out that in many states as different as Texas and Massachusetts, crime is down while imprisonment is also down.

The trend in the drop in crime over the past 20 years seemed to be reversing this summer with spikes in homicides in several major cities: Baltimore, Los Angeles, Chicago, Washington, D.C., Houston, and Philadelphia. Only time will tell whether these phenomena are anomalies.

While building more prisons and mandating long sentences is falling out of favor, what is the alternative? Gelb said that today we know much more than we did in the 1970s when we got on the prison-building path. In the last 15 or 20 years, there has been “an explosion of research” that has found a variety of interventions that effectively target the problem and can do something to bend the recidivism curve, he said. And policymakers are picking up on this research.

Speaking on the panel was one of the nation’s most knowledgeable individuals on meaningful interventions to reduce crime. David Kennedy, who is director of the National Network for Safe Communities, a project of John Jay College of Criminal Justice in New York City, is known for interventions that reduce violence, minimize arrest and incarceration, and enhance police legitimacy.

Kennedy said that the example of New York State shows that it is possible to bring down incarceration and crime rates. New York’s prison populations and New York City jail populations have dropped while the state has enjoyed for 20 years, “the longest, sustained crime reduction in the country.”

“To bring our [nation’s] prison population down is going to be one of the ways in which we drive further crime reduction,” he said.

Kennedy said that much of what is being done in crime prevention is counterproductive and should stop. He links “violent crime hot spots” to over-incarceration and broken relations with the police and the criminal justice system. The damage done to individuals, families, and communities, especially locking men up in those communities, leads to a host of negative social outcomes. These include the imprisoned being less likely to marry, take care of families they had before going to prison, or go to school. Offenders also tend to withdraw from civic life. In addition, over-incarceration leads to communities not stopping crime in ways that communities are able to.

“Much of what we have been doing, especially in the hard hit places, in the name of crime prevention, is in fact criminogenic. So, we should stop doing those things. Doctors say, ‘First, do no harm.’ Criminal justice needs to learn that lesson.”

Much of what we have been doing, especially in the hard hit places, in the name of crime prevention, is in fact criminogenic. So, we should stop doing those things.
— David Kennedy, John Jay College of Criminal Justice

Sally Satel, a resident scholar at AEI and the staff psychiatrist at Partners in Drug Abuse and Rehabilitation Counseling, spoke about drug diversion programs. She said that a number of studies have found, “Drug courts are more effective than conventional corrections in helping people cut back on drug use and reoffending.”

Drug courts apply “swift, certain, and fair” sanctions but not severe consequences. Severity is not the issue, she said. They go through a formal treatment program, which if they complete, charges are dismissed. An offender will be sanctioned for missing a session or failing a drug test or somehow being out of compliance with punishments such as community service, house arrest, or a few days incarceration. The research has shown that the important thing is that the punishment be “swift and certain.”

Satel made a surprising statement regarding some of the drug addicted. “There are some patients, and a fair number of them, who actually don’t need treatment,” she said. Satel pointed out that in the civilian population, most people overcome their addictions to either alcohol or drugs on their own. There are drug-addicted offenders who don’t need to be in a drug program, but will respond to a sanctions regime. A lot of money can be saved in this way because these drug treatment programs are expensive to run.