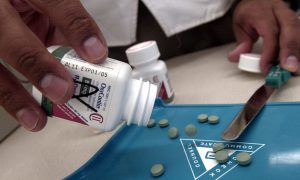 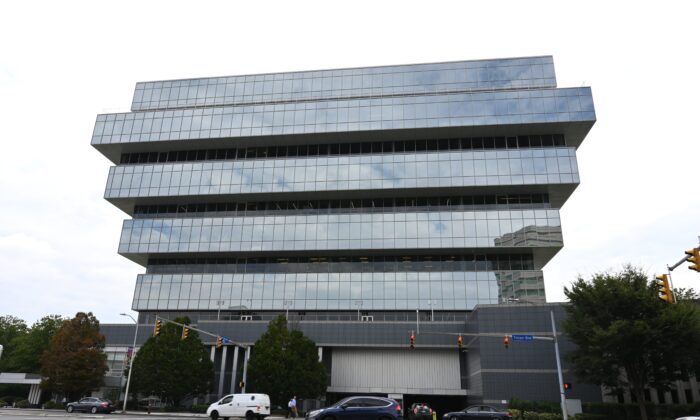 Headquarters of Purdue Pharma LP, the maker of the painkiller OxyContin, is seen in Stamford, Connecticut Sept. 16, 2019. (TIMOTHY A. CLARY/AFP/Getty Images)
US News

NEW YORK—Pharmaceutical company Purdue Pharma recently filed for bankruptcy as part of an agreement to pay back billions of dollars to communities ravaged by the opioid epidemic, which thousands of lawsuits alleged Purdue helped fuel—but some critics say that’s not enough.

Purdue, which made billions selling its prescription painkiller, OxyContin, filed for bankruptcy on Sept. 15 in New York as part of a tentative agreement the company reached “in principle” with 24 state attorneys general and analogous officials from five U.S. territories.

Since the introduction of OxyContin in 1996, addiction and overdoses have surged. More than 2,600 lawsuits assert that Purdue aggressively sold OxyContin as a drug with a low risk of addiction, despite the company knowing it wasn’t. The privately held company now aims to restructure under terms of a proposal to settle the widespread litigation.

Four attorneys with backgrounds ranging from bankruptcy to criminal defense told The Epoch Times they believe criminal charges could be warranted against Purdue and the Sackler family, whose members founded the drug company.

John H. Hickey, a trial attorney with more than 36 years experience in personal injury and wrongful death cases, told The Epoch Times that Purdue likely knew for a long period of time that people were abusing their pain killers, yet did nothing.

Purdue’s OxyContin is just one of many opioids prescribed, but critics say the company’s development of the drug and their aggressive marketing strategies greatly contributed to the opioid epidemic. The many lawsuits allege that Purdue and its owners misled doctors and patients about addiction and overdose risks.

Purdue, which employs thousands of people worldwide, also persuaded doctors who were reluctant to prescribe such strong painkillers to their patients, according to a lawsuit filed by the Massachusetts attorney general.

Hickey noted that criminal charges against drug company owners are unusual, but he also said the “opioid crisis is highly unusual.”

“It’s like when part of the world was addicted to opium. Just a huge segment of a society hooked on these drugs,” he said. “Maybe it’s really not comparable to anything before in the history of men.”

The opioid epidemic has been deemed a public health crisis and claimed the lives of nearly 400,000 people between 1999 and 2017, according to the latest U.S. data. On average, the epidemic takes the lives of 130 people every day across the United States.

According to Purdue, their settlement restructure is estimated to provide “more than $10 billion” in value to address the deadly opioid crisis.

The company denies any wrongdoing and its board of directors chairman, Steve Miller, told reporters in a conference call previously that it doesn’t intend to admit to any misconduct.

In a Sept. 15 statement, Miller promised that the framework of the settlement would provide billions in “critical resources to communities across the country trying to cope with the opioid crisis.” He said it would stop the company from wasting hundreds of millions of dollars and years on extended litigation.

Kentucky’s Senate leader, meanwhile, told reporters on Sept. 24 that he will start the next legislative session in January with a call for an investigation into Purdue and the state’s $24 million settlement.

The measure, he said in his announcement, would request a special counsel to investigate the details of the settlement. Kentucky had sued Purdue in 2007 before the case was finally settled in 2015 by then-Attorney General Jack Conway.

“Any deal that cheats Americans out of billions of dollars, allows the Sacklers to evade responsibility, and lets this family continue peddling their drugs to the world is a bad one, which is why New York remains opposed to it,” James said in a Sept. 16 statement.

Court documents from James’s office showed that former Purdue board member Mortimer D.A. Sackler allegedly used shell companies “to shift Purdue money through accounts around the world and then conceal it in at least two separate multimillion-dollar real estate investments back here in New York, sanitized (until now) of any readily-detectable connections to the Sackler family.”

In a statement to Reuters, a spokesman for Sackler said the decade-old transfers were “perfectly legal and appropriate in every respect.”

David Reischer, a bankruptcy attorney and the CEO of LegalAdvice.com, told The Epoch Times that it’s “certainly conceivable” that a bankruptcy wouldn’t protect the Sackler family if the wire transfers were intended to hide assets.

Reischer added that “criminal charges are most definitely warranted against the Sackler family due to the malfeasance associated with the unlawful wire transfers.”

He also talked about the “potential criminal liability” linked to what he described as “mass distribution of a lethal product” by Purdue.

“A judge will have to evaluate the multiple claims by state attorneys general that the Sackler family have diverted most of the financial burden from litigation to a company that is incapable of paying creditors, especially if it is due to Sackler malfeasance from unlawful wire transfers.

“Those patents that have value will be sold off as an asset in a bankruptcy proceeding. The proceeds from the sale of any remaining assets will be used to pay off some or all of the creditors,” he continued. “There will obviously be a shortfall due to the Sacklers diverting large chunks of money and they should definitely be held accountable for such financial fraud.”

If Purdue wasn’t part of a settlement, Reischer said there was a high probability the company would be broken up in bankruptcy with its employees likely losing their jobs as a consequence.

“This was a play torn from the playbook of every financially powerful family that has been investigated and it was clearly an effort to shield funds from being frozen or seized later,” Jeffery Greco, a criminal defense lawyer and former prosecutor, told The Epoch Times.

Neither Purdue nor the Sackler family responded to requests for comment by The Epoch Times for this article.

The main elements of the settlement, according to Purdue, range from the owners of the company contributing all assets to a trust or entity for the benefit of claimants, as well as the Sackler family contributing a minimum of $3 billion.

The Sackler family told The Epoch Times in a Sept. 16 statement that they have “deep compassion for the victims of the opioid crisis” and they believe the settlement framework “is an historic step towards providing critical resources that address a tragic public health situation.”

A criminal defense attorney and former homicide prosecutor told The Epoch Times that if the allegations against Purdue were true—as the thousands of lawsuits have laid out—there is hardly any difference between the drugmaker company’s behavior and that of a drug dealer on the street.

“It is hard to distinguish those actions from the typical street drug dealer, who would be facing criminal charges for selling the product and even greater penalties if someone died as a result,” Julie Rendelman said via email.

What distinguishes OxyContin from many of the other street-level drugs such as heroin is that for years, patients thought they were using a safe and effective drug, Rendelman said. Especially as they had been prescribed by their own doctors.

Purdue’s bankruptcy filing follows an Oklahoma judge’s order in August, in which Johnson & Johnson was told to pay $572.1 million to the state for deceitfully marketing addictive opioids.

“One could argue that Purdue’s failures to protect the public are more egregious than the acts of the lower-level dealer who is selling drugs to those who are presumably aware of the risks involved in using the drug but choose to anyway,” Rendelman added.

To implement the settlement agreement, Purdue filed for reorganization under Chapter 11 of the U.S. Bankruptcy Code. Purdue said that the “court-supervised process” is aimed to, among other things, facilitate “an orderly and equitable resolution of all claims against Purdue, while preserving the value of Purdue’s assets for the benefit of those impacted by the opioid crisis.”

However, two dozen states remain opposed or uncommitted to the proposed settlement.

“To theorize that Purdue did not contribute greatly to the opioid crisis is akin to saying that texting and driving is not a great contributor of traffic accidents,” Greco said. “Purdue makes a product. This product causes users to become addicted.”

Greco also believes Purdue and its owners should face criminal charges. He said the company had to have known about the potential dangers of OxyContin. But he said they were also eyeing the potential profits.

The fact that Purdue didn’t admit to wrongdoing and only provided money to states is akin to a “modern-day racket,” Greco said.

“Ideally, the public would like to see a company like Purdue held criminally responsible so that this cycle of death could be curbed,” he added.