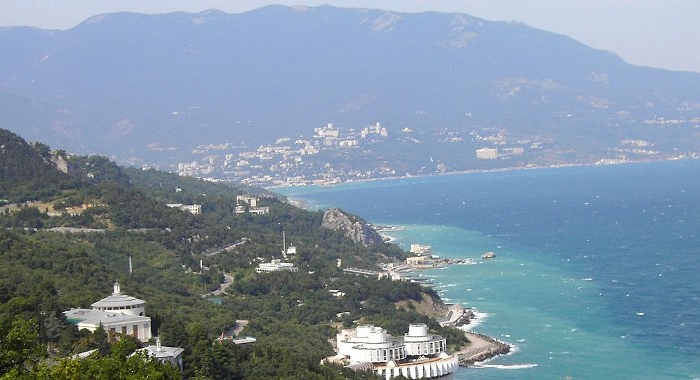 When the Crimea peninsula was reunified with Russia over what they saw as a deteriorating situation in Ukraine, one of the Black Sea’s most vibrant vacation destinations took a huge hit. Then several months later the ruble crashed making travel inside Russia dirt cheap. For hospitality related businesses there, it’s fair to say great blessings come in mysterious surprise packages.

If you’re a hotel owner in Yalta, the news of a new nationality probably came as less of a stunning surprise than a brand new currency. Given how weak the Ukrainian hryvnia was compared to the ruble before the latter’s free fall, those owners can really be heard wheezing a sigh of angst. However, a rock bottom ruble value also gives business on that peninsula a silver lining all around currency storm clouds. The value of Crimea vacation land just got introduced to millions more paying Russians. Yes, Germans and Brits may not be flocking to catch a glimpse of the famous Swallow’s Nest near Yalta, but inter-Russia visits have already skyrocketed.

The phenomenon is actually fairly simple to describe. Before the Ukraine crisis Russians were one of the fastest growing segments of the inbound European travel market. Since the east-west divide, outbound tourism to the greater Europe and worldwide from Russia has dropped dramatically. Where once Egypt and Turkey may have been ideal touristic destinations, now it is simply more affordable to go to Crimea, and this is true even though road access there from mainland Russia is negated. Oleg Safonov, head of the Federal Tourism Agency there, reported recently:

Since the Ukraine crisis began some months ago Russian tourism to Europe dropped by an estimated 40%, while the demand for vacations by travelers increased by some 30%. However positive these numbers may seem though, news that the crisis has caused the bankruptcies of 30 or more tour companies signifies the instability too.

Russia’s annexation of Crimea is a boom for domestic tourism even though there is no direct access via roads outside embattled Ukraine. Russia has plans to build a bridge over the Kerch Strait, that will cost in excess of 257 million rubbles. According to estimates it will take about three years to build the bridge, but in the meantime tourists must wait in line for the ferries that cross the strait. a sum that equals 3.5 million dollars. 2018 is the estimated year for the completion of the project. Right now, you can go from Russia to Crimea.

Other notable attractions outside Yalta include; The Khan’s Palace, Massandra Palace, Bolshoi Canyon, Livadia Palace, Genoese fortress in Sudak, a vast array of outdoors and nature attractions, and the very French Riviera like Gurzuf.