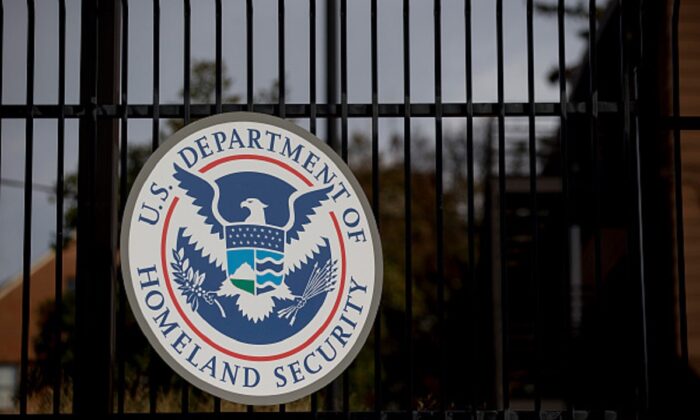 The U.S. Department of Homeland Security (DHS) seal hangs on a fence at the agency's headquarters in Washington on Dec. 11, 2014. (Andrew Harrer/Bloomberg via Getty Images)
Viewpoints

The Biden administration announced on June 11 that it has dismantled the Victim Of Immigration Crime Engagement Office (VOICE), an agency established by former President Trump in 2017 to help victims of crimes committed by criminals illegally present in the United States. ABC News said the move “symbolizes President Joe Biden’s rejection of former President Donald Trump’s repeated efforts to link immigrants to crime.” News stories on VOICE failed to include some high-profile cases.

“He pulled the trigger on my son and changed our life forever,” Singh’s mother Rohini Lata Singh testified. Singh’s widow Amanika Chand-Singh, 31, told the court, “What do I say about a person who had decided to murder a 33-year-old police officer, made his 31-year-old wife a widow, and a 5-month-old child a son without a father?”

As the Fresno Bee reported in 2018, the Salvadoran MS-13 gang had launched a “reign of terror,” with at least 14 murders in the California town of Mendota. When federal officials stepped in, California Attorney General Xavier Becerra, once on Hillary Clinton’s short list as a running mate, said he was not concerned with the gang’s “status.” California’s sanctuary laws protect illegals, even the violent criminals among them.

In July 2015, Kate Steinle, 32, and her father were strolling on a San Francisco pier when Mexican Jose Inez Garcia Zarate, illegally present in the United States, discharged a firearm and claimed Steinle’s life. The false-documented Zarate used many aliases and had been repeatedly deported before finding sanctuary in San Francisco.

In 2014 in Sacramento, California, Mexican national Luis Bracamontes, illegally present in the United States, gunned down police officers Danny Oliver and Michael Davis Jr. In court, Bracamontes said he wished he’d killed more cops and yelled “Black lives don’t matter” at Anthony Holmes, wounded in the attack. The murderer also hurled racist slurs at African American relatives of the victims and members of the jury. Such attacks by false-documented illegals are not new.

The victims, hideously mutilated with a machete, included African Americans and Native Americans who had been working in local orchards. The mass murder spree was one of the worst crimes in U.S. history.

Back in 2014, then Vice President Joe Biden proclaimed that illegals are “already Americans,” effectively canceling U.S. immigration law. Biden has now essentially opened the border to all comers and the mass influx takes place during a pandemic when legitimate citizens and legal immigrants face still restrictions on travel. That many of the newcomers could be criminals or terrorists does not seem to be an issue for the Delaware Democrat.

Statements from Biden on the Kate Steinle, Danny Oliver, and Ronil Singh cases are hard to find. In a political career that goes back to 1972, Biden has never been a high-profile defender of crime victims. Last year, with violent riots in cities across the nation, Biden said Antifa was only “an idea.” In 2021, Biden seems determined to reverse everything Trump achieved, regardless of its success.

Biden’s Department of Homeland Security (DHS) plans to replace VOICE with The Victims Engagement and Services Line, supposedly a more “comprehensive and inclusive system” that will allow reporting of mistreatment at immigration centers, and will designate visas for victims of human trafficking.” Stephen Miller, who had a hand in Trump immigration policies, compared it to “allowing drug dealers to get help from the Drug Enforcement Administration for their crimes.”

DHS director Alejandro Mayorkas previously headed USCIS (United States Citizenship and Immigration Services) and pushed for approval of virtually all applications for immigration benefits. Mayorkas was also the architect of DACA, the Deferred Action for Childhood Arrivals program. In practice, Biden’s DHS boss is more of an agent for false-documented illegals than an upholder of U.S. law and sovereignty.

Joe Biden’s DHS is now flying the “migrants” all over the country for “processing.” A ballpark figure for the chances that any will be returned to their own countries is zero. The intent, legitimate citizens and legal immigrants could be forgiven for believing, is to expand an imported electorate. Likewise, if legitimate citizens and legal immigrants thought crime by illegals is now certain to increase, it would be hard to blame them.