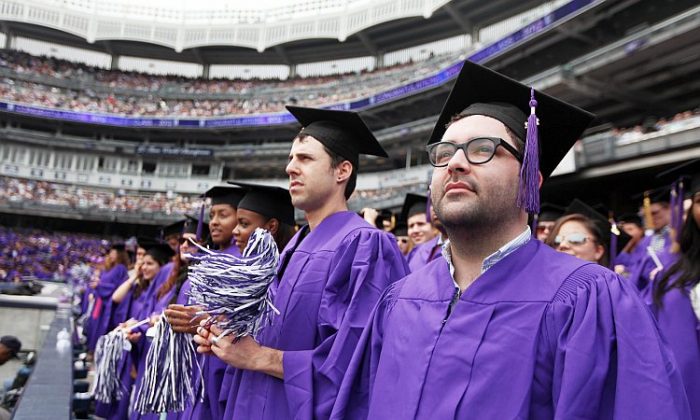 WASHINGTON—When children save for college they are more likely to go, experts say. A new program from the U.S. Department of Education sets out to test this hypothesis and make college a reality for more children.

President Barack Obama wants the United States to have the largest proportion of college graduates in the world by the end of the decade—a position it once held. This can only happen by increasing the number of lower-income students attending and completing college.

In recent years, student debt has reached stratospheric levels, over $1 trillion nationwide. Student loan debt has surpassed auto debt and credit card debt as the most common type of dept, leaving students questioning whether a college education is a viable path to the American Dream.

A number of innovative programs have been started to address the social and economic barriers to college students that families face. GEAR UP, which stands for Gaining Early Awareness and Readiness for Undergraduate Programs, is a program from the U.S. Department of Education designed to tackle these challenges. Congress approved GEAR UP in 1998, and reauthorized it in 2008.

According to Congressman Chaka Fattah (D-Pa.), one of the chief architects of GEAR UP, it has “proven without doubt to be the largest early college awareness and scholarship program” to impact college attendance rates of disadvantaged families.

GEAR UP programs include early child intervention components that foster what Dr. William Elliot III calls a “college-bound identity.” Elliott is an assistant professor in the School of Social Welfare, University of Kansas, and serves as a faculty associate for the Center for Social Development.

Students who participate in GEAR UP programs can receive funds to help them start a college savings account when they are still in elementary school. Elliott’s research makes a compelling case for child savings as an effective intervention that improves the likelihood of college attendance.

Elliott’s research shows that several factors effect college attendance and completion, among them: the educational level of parents, family income, student grades and student aspirations. But when all these factors and other variables are controlled for, children with savings designated for college are about twice as likely to enroll in or graduate from a two-year or four-year college than children without such savings accounts.

If students are enrolled in a two-year or four-year college before age 23, then Elliot considers them “on course” for graduation.

In a longitudinal study cited in a NAF publication, Elliot said that 74 percent of children with savings for college were “on course” compared to 41 percent of students with no savings. The amount of savings was measured in 2002, when students were between the ages 12 to 18, and again in 2007 when they were between ages 17 to 23.

Money can be a major obstacle for many. Aspirations and academic achievement are important but college affordability can block low-income students. Elliot refers to a 2006 study of the Advisory Committee on Student Financial Assistance that found that while 70 percent of low-income children in the 10th grade plan to go to college, only 54 percent actually enroll upon graduating high school.

A new ED program will give Dr. Elliot a chance to test his hypothesis of the impact of child college savings. On the same day of the NAF forum, the U.S. Department of Education (ED) announced the College Savings Account Research Demonstration Project.

“Today, only 56 percent of the full-time first time freshmen are getting through college in 6 years…We’re losing a young person every 22 seconds,” Kanter said.

The ED test program will give each student $200 in seed funding to start an education savings account. Students will have the opportunity to have their contributions to the account matched up to $10 per month over four years. “Savings will be available for students to use for educational expenses upon enrolling in an institution of higher education,” according to the ED announcement.

One may wonder how the ED project will have much impact. If one does the math, the most the child could save in four years is $1,160, which isn’t much considering the cost of four years of college tuition.

But Elliot responds that children’s savings programs may well “empower” children, giving them an expectation to attend and complete college. This college-bound identity can form as early as the fifth grade, he says. The support from parents and family members of these accounts may help drive home the message: “We go to college,” he says. It’s this expectation along with the funds, he argues, that makes attendance and completion more likely.