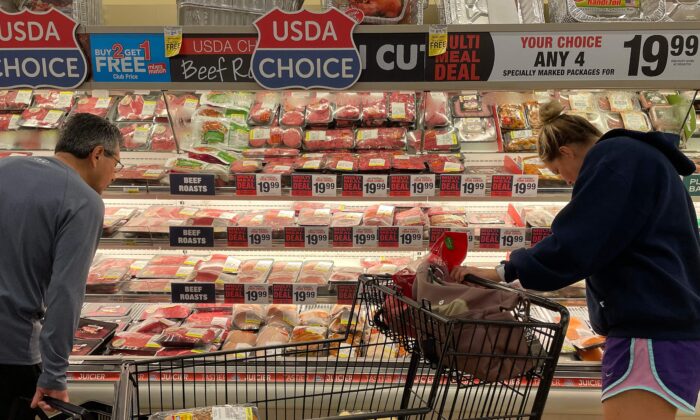 Consumers shop for meat at a grocery store in Annapolis, Md., on May 16, 2022. (Jim Watson/AFP/Getty Images)
Business Columnists

The Fourth of July is always a bittersweet holiday, a time to reflect on the grand ideals of the founding of American independence. But this year, it will once again be impossible to believe that those ideals are still with us as a governing principle, at least not consistently, not even predominantly, certainly not right now.

To summarize the current problem, the nation decided to turn against those ideas of freedom and rights in the name of virus control (a model mysteriously copied from the praxis of the Chinese Communist Party) and thereby unleashed at home the very tyrannies that our ancestors fought so hard against, establishing them as a permanent feature of American life.

And we’re paying the price in the worst way now. They shut down nearly the whole of the U.S. economy—as if that would be possible without causing egregious damage—and closed churches and schools. They tried to make up the difference by spending and then printing trillions of dollars, believing somehow that this wouldn’t create an eventual calamity.

That calamity is here now, and it’s showing up not only in raging inflation but also in worker demoralization, cultural nihilism, radical political discontent, and economic dislocation. While the most pressing problem right now is satisfying U.S. energy needs, the Biden administration offers no more than wind and sunlight—literally recommending those two means of powering our lives rather than tapping abundant fossil fuel resources.

The incompetence on display daily is truly mind-boggling. As a result, not even our usual July Fourth celebrations can be observed without pressing reminders of how prosperity is being drained away. The cost for typical celebratory parties this year, according to Wells Fargo, is up fully 11 percent over last year. That’s also the real-time rate at which food and beverages are going up in price.

The Farm Bureau, according to The Epoch Times, fully expects a 17 percent increase:

Such a level of inflation has been unknown in the United States for 40 years, and it’s worse this time because of its longevity. There is no one at the Federal Reserve right now with the courage to do what needs to be done, and no one in any policy position within the reigning party will push economic growth over control, enterprise over diktat, or freedom over compliance.

For these people in office, command and control are all they know.

We will soon be watching those firecrackers in the sky to celebrate freedom as a principle, but it was a little over a year ago when many ruling-class voices were dismissing the whole idea and even calling it “freedumb.” That was surely a turning point in American cultural life, when the people who imagined living out this country’s main ideals were put down as enemies and suspected as possible insurrectionists.

Regardless, the resistance to this unrelenting attack on American ideals is growing and appearing in highly unusual places. One that struck me most recently was the printing of actual truth on the pages of a site run by the Fed itself.

Some background: The Fed was created in 1913 with branch banks around the country to give it the appearance of decentralization, even though it’s not true. Those branches survive to this day. Each specializes in a few tasks to give them some reason for existence. Each one has a different character. The Dallas Fed has always had a more conservative bent, leaning more toward tighter money and freer markets.

The Dallas Fed’s latest survey of manufacturing output sentiment has done the world a service by actually printing comments from businesspeople who answered the survey. Here are some of the choice answers. It’s remarkable to me that such sentiments have been printed.

These comments are not only obviously true; that they appear on a Fed site is stunning and indicative of real revolt happening at all levels of society.

Let’s return briefly to the problem listed above, namely that none of this can be fixed anytime soon. We are in for 2 1/2 years of continuing hell. It seems incredible to contemplate. And remember, we’re talking about responses from Texas, a state that opened earlier than others and has a lower tax burden than most states. It’s a state to which people have moved in order to escape the despotism. And yet even here, there is no escape.

After years of this, what will be left of American industry, culture, the labor pool, and optimism generally is hard to know. The tragedy of it all is that the Biden administration really did have a chance to do some good, to bring calm and normalcy to American life. They instead chose some kind of mythical revolutionary path inspired by untested woke ideology hatched in university settings that has nothing to do with real-world longings for liberty and a happy life.

It’s best not to let this July Fourth pass without deep reflection on the meaning of the holiday. The ideals of this holiday are not just for the 18th century. They are for the 21st century, too. The sooner we see this and act on it, the sooner America can get back to being a light unto the world.