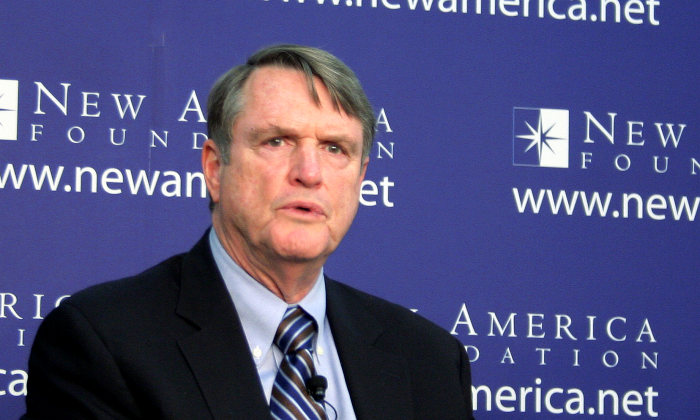 WASHINGTON—A report written by the Washington Post’s former executive editor, Leonard Downie Jr., charges that American press freedom has deteriorated. The report blames the Obama administration’s aggressive stance against leaks and broad electronic surveillance in what was promised to be the most transparent administration in American history.

Sponsored by the Committee to Protect Journalists and released Oct. 10, the report finds that information on issues of great public concern is drying up as sources have become too afraid to talk to reporters.

Government employees and contractors—the primary source for government wrong doing—have become unwilling to talk to reporters under the government’s watchful eyes of their email and telephone conversations, according to Downie, who currently is professor of journalism at Arizona State University.

“The Obama Administration officials and employees are increasingly afraid to talk to the press. Every single journalist I talked to said that’s the case for their sources in government and whether or not they yielded classified information, but especially if it involves classified information,” said Downie, who summarized his report at a panel discussion at the New America Foundation, Oct. 17.

Downie writes in the report that numerous journalists told him that officials are reluctant to talk of even unclassified information, which may be regarded as unauthorized disclosures, because of the presence of the National Security Agency extensive surveillance programs of telephone and email communications exposed by Edward Snowden as well as the zeal of this administration to investigate and prosecute leakers.

Most troubling of all is the emerging belief taking hold that reporters can’t protect their sources.

Downie quoted several journalists, including national security journalist R. Jeffrey Smith: “I worry now about calling somebody because the contact can be found out through a check of phone records or e-mails.”

Rajiv Chandrasekaran, Senior Correspondent and Associate Editor, The Washington Post, said on the panel, “Government employees refuse to engage not just on the record but even to speak on background till it’s cleared by the press office.”

White House press secretary Jay Carney dismissed journalists’ concerns, saying, “The idea that people are shutting up and not leaking to reporters is belied by the facts.” He attributed the complaints to a “natural tension” existing between any administration and the press.

The Justice Department is using an old law, the 1917 Espionage Act, that was originally intended to prohibit spying for foreign governments. Today, it’s used to prosecute persons who disclose classified information, including Edward Snowden.

“Six government employees, plus two contractors including Edward Snowden, have been subjects of felony criminal prosecutions since 2009 under the 1917 Espionage Act, accused of leaking classified information to the press—compared with a total of three prosecutions in all previous U.S. administrations,” writes Downie.

In the course of coming down hard on the leakers, journalists who are recipients of the information become tainted and sometimes subject to criminal investigations and prosecution “for doing their jobs as journalists,” writes Downie.

Joel Simon, executive director, Committee to Protect Journalists, said that taking together all the various ways in which the administration discourages contact with the press, he must conclude, “There is a systematic effort to marginalize and undermine the work of the press.”

Exasperating the challenge to reporters is the “Insider Threat Program,” instituted by executive order, which is being implemented in every federal government department and agency, “which not many people know about,” said Downie. Casting a Big Brother chill, federal employees have been “ordered to monitor reports of any suspected insider threat activity, which includes communications with the press,” said Downie.

Officials say there is no cause for concern. In Aug. 2013, President Obama stated that his administration would work to reform some of the government’s surveillance programs, and told the American people that new tools for surveillance weren’t being abused.

The report discusses several cases, and a few especially stand out that trouble free press advocates. First is the case of a former CIA officer who was indicted on charges for providing James Risen, a New York Times, two-time Pulitzer Prize winner journalist, information about a CIA attempt to sabotage Iran’s nuclear program, which was used in Risen’s book, “State of War.”

The Justice Department subpoenaed and seized dozens of telephone calls and emails between Risen and his source back in 2002. The U.S. Court of Appeals for the Fourth Circuit ruled 2-to-1 that Risen would have to reveal his source because he was the only witness to the alleged criminal activity. Risen has vowed that he would choose jail rather than reveal his source in a courtroom. At the panel discussion, Downie announced that Risen’s appeal recently and that the case will likely go before the Supreme Court.

One of the most troubling signs that the federal government had crossed a line was when the Justice Department informed the Associated Press that “it had secretly subpoenaed and seized all records for 20 AP telephone lines and switchboards for April and May of 2012,” writes Downie. The records were obtained of AP news bureau lines in New York, Washington, Hartford, Conn., and the press gallery of the U.S. House of Representatives.

The AP had run a story in May 2012 that divulged the covert operation of the CIA in Yemen, which had penetrated al-Qaeda in the Arabian Peninsula. Intelligence officials were very angry about this disclosure.

Even though only five AP reporters and an editor were involved in the Yemen story, a wide net was cast. AP President Gary Pruitt was outraged that records of thousands of newsgathering phone calls were seized of more than 100 AP journalists using newsroom, home, and mobile phones.

Another instance discussed widely is that of the secret seizure of telephone and e-mail records of Fox News reporter, James Rosen. In 2009, he interviewed Stephen Jin-Woo Kim who was later indicted for espionage. Downie referred to an FBI affidavit which asserted that Rosen had violated the Espionage Act in seeking and accepting information from Kim as if he were an accomplice, something which was quite disturbing for journalists and news organizations.

A secret subpoena was approved by Attorney General Eric Holder in May 2010. Three years later it was learned that Justice went back to court repeatedly “to avoid notifying Rosen and Fox News about the subpoenas in an apparent effort to monitor Rosen’s e-mail for other contacts with government officials. It amounted to an open-ended government surveillance of a reporter’s communications,” states Downie.

Strictly speaking, reporters don’t have special privileges different from ordinary citizens regarding awareness of criminal activity. While some states have shield laws, there is as yet no federal shield law for journalists, although there are proposed bills in both houses of the Congress. Nonetheless, an understanding has arisen between law enforcement and journalists that allow reporters to protect the identities of their sources when it “outweighs the government’s need for the reporters’ testimony to establish its case,” writes Downie.

It’s understood that journalists serve the public good by disclosing information that the government would rather keep hidden—not only exposing “waste, fraud, and abuse”—but also questionable policies and actions that the American people should know about, such as actions that are illegal or unconstitutional.

The role of the free press in a democracy is to hold our government officials accountable and often this cannot be done by reports from the press without confidential sources.

In cases where there is a conflict between a newspaper about to publish a damaging story and government officials, discussions are held and a proper balance is struck. It’s decided how best to publish the story “without causing unnecessary harm,” writes Downie based on when he was at the Washington Post.

For several decades, the Justice guidelines prescribed that issuing subpoenas was a last resort in a federal investigation. It was drawn up narrowly and news organizations were given timely notice to negotiate with Justice. Clearly, the Justice Department’s secret subpoena of thousands of AP journalists’ phone calls indicates that this policy is not being followed very closely