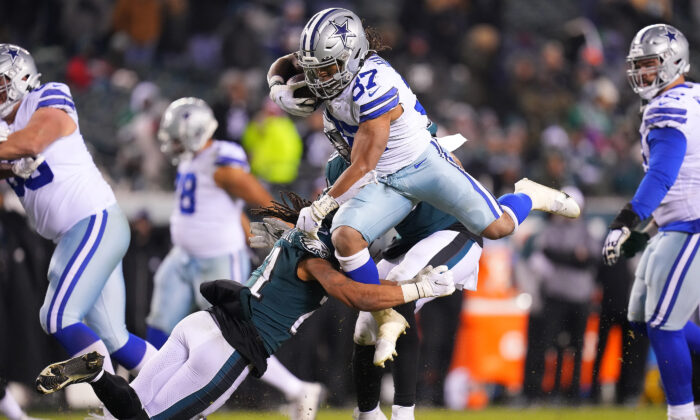 JaQuan Hardy #37 of the Dallas Cowboys runs with the ball for a touchdown in the fourth quarter of the game against the Philadelphia Eagles at Lincoln Financial Field, in Philadelphia, on Jan. 8, 2022. (Mitchell Leff/Getty Images)
NFL

Cowboys Pull Away for Blowout Over Eagles 51–26

As several records were broken in the final game of the regular season, the Dallas Cowboys (12–5) felt the importance of playing well heading into the playoffs; they took command of the game late in the first quarter to dominate at the Philadelphia Eagles (9–8), 51–26, on Saturday night.

Both teams successfully made the playoffs, and the result could possibly impact the seeding. Typically, this late match-up could have major implications for the Division title. This season, Dallas had already locked up the NFC East with the best overall record, and a 6–0 record in the division.

Dallas will likely be a the number four seed in the NFC playoffs. There’s a small possibility of it being the second seed with a few unlikely upsets on Sunday. While Philly finished second in the division, and irregardless of this outcome, would likely be the sixth seed as a wildcard. Thus the Eagles sat out as many starters as possible to rest and not risk injury.

“I think a lot of factors and variables go into these decisions. No different for us, no different for Philadelphia,” said Dallas coach Mike McCarthy. “Every team does what they feel that they need to do. It’s in their best interest, short-term and long-term. So we talked about it Sunday after last week’s game, we all felt clarity that this was the best thing as the players wanted to play. I think it tells you where we are as a football team. So that’s exciting. This was the right thing for us to do, and I’m glad the way it turned out.”

Nonetheless, Dallas quarterback Dak Prescott threw a career-high five touchdown passes as he totaled a franchise record of 37 touchdowns for the season. For the day, he finished with 295 yards passing on 21 of 27 attempts. Prescott didn’t need the additional 17th game to break the record; he played 16 games, missing a week from an ankle injury. Prescott surpassed Tony Romo’s season highs of 36 touchdowns in 2007, and 34 touchdowns in 2014.

“It’s special. A record like that, that’s this team, that’s this offense. All the different guys that caught passes, the guys that protected, everybody played a part in it. I’m just the beneficiary of it. But to know where I was a year ago, to be where we are now, heading to the playoffs, very excited,” said Prescott.

Ezekiel Elliott led the Cowboys in rushing with 87 yards on 18 carries; totaling 1,002 yards for the season, which is sixth best in the NFL.

The Eagles rested starting quarterback Jalen Hurts. Gardner Minshew got the nod throwing for 186 yards on 19 of 33 attempts, two touchdowns, and one interception.

The game was tied 17–17 with 3:40 remaining before halftime on the Eagles’ seven-yard touchdown run from Kenneth Gainwell.

The Cowboys responded with two touchdowns passes before halftime; a two-yard, and a nine-yard, from Prescott to Schultz for a 30–17 lead. The Cowboys’ offensive display against the Eagles non-starters continued to be overwhelming in the second half. The interception by Dallas linebacker Leighton Vander Esch deep in the Eagles territory with 10:16 left in the game led to the Cowboys’ final touchdown drive of 26 yards culminating in a JaQuan Hardy 22-yard TD run. The Eagles would then score their only touchdown in the half on a 75-yard drive capped off by a Minshew 36-yard touchdown pass to Quez Watkins, for a final score of 51–26.

“We got some momentum going, able to score some touchdowns on offense,” added Prescott. “Had some success running the ball, throwing the ball; more importantly, the momentum, the rhythm, and fun. The camaraderie we had, we just played together. I wanted to finish the season off the right way. I think we did that in all facets of the game.”