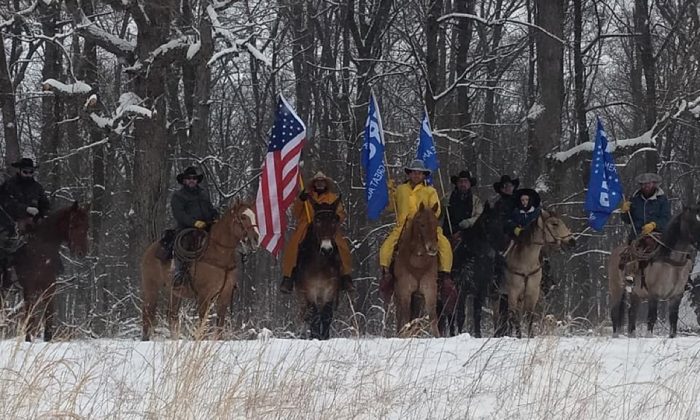 Cowboys for Trump rode from Cumberland, Md. to Washington to support President Trump and border security, as well as defending life and the second amendment. (Cowboys for Trump/Shawn Cummings/Facebook)
US News

Twelve Americans loyal to their country and their president set off on horseback from Cumberland, Maryland on Feb. 15, through the Chesapeake and Ohio Canal along the Potomac River on a ride to Washington. The purpose of the journey was to show their support for the president and his announcement of a declaration of a national emergency to secure funds for border wall construction and address border security in the Southwest.

With the help from Kina Davis of Spring Gap Farms, who donated the use of the horses, trucks, and trailers for the ride, cowboys from across the country set off in the snow on the 173-mile ride.

“I don’t know if you believe in God, and higher powers, but I truly believe the cause of this was bigger than all of us,” said Kina. “And if they didn’t get these horse from me, they would have somehow been provided for.”

Kina said she gets hundreds of calls a year to rent horses to ride in the canal, and that she usually says no, because no matter what kind of experiences customers say they have, it might not be accurate.

However, there were key points that resonated with her when organizers Couy Griffin and Josh Davis of Cowboys For Trump contacted her by phone.

Consequently, even though she was thinking there was no way she was going to give out horses to ride to Washington, and that most people wouldn’t even do that with bicycles, those key words changed her mind.

“Everyone that has something to protect, or something they love, you put a wall around it, whether it be a house or a fence,” said Kina recalling the conversation with the organizers. “We really need this wall.”

Kina believes no matter who you are: “We do all believe in some sort of security.”

“And the whole reason we’re having so much trouble is that they hate President Trump,” said Kina. “Well let’s kind of go beyond that.”

According to Cowboys For Trump’s gofundme page, the ride was a symbol of support for the president and a symbol for unity and righteousness.

“It didn’t matter to us, we were just there to support our president,” said Josh. “A lot of the men that were there were from down in New Mexico, they live on the border, they deal with the immigration problems every day, they have illegal immigrants crossing their farms, crossing their ranches, stealing from them, their friends are getting beat up and murdered and robbed, and I think a lot of people that are opposed to the wall and are against it, have no clue what goes on down there, and they don’t want to know, because the only reason why they’re opposed to it is because Trump wants it.”

Please support the bipartisan trail ride on Washington, DC in support of a solution to the #BorderCrisis, including…

Josh said the Cowboys received great support along the way.

“What I’ve noticed about putting this ride on is a lot of the conservative people are more than happy to jump in and help, we had amazing support group throughout this whole thing,” said Josh.

“As far as the horses go there were people coming out of the woodwork,” he said. “Offering their farms, their barns, offering places to put horses up, and Spring Gap Farms right outside of Cumberland, Maryland they supplied horses, trucks, trailers, feed, hay.”

“Southern states in Cumberland, Maryland donated forty bags of cedar shavings for the stalls in the trailers,” said Josh. “It was just an amazing experience.”

The Cowboys For Trump Facebook page says that “Cowboys For Trump is an organization founded upon like-minded Americans who are concerned about the direction of our country. We believe that the liberal progressive agenda is drastically moving us away from the identifying principles that make us proud to be American.”

“When a group of men and women stand up, a lot of other people are gonna follow,” said Josh.

“This is not the end, this ride might be over, but I promise you we will be back and we’ll be back bigger and better.”

Josh said that the Cowboys are talking about organizing another ride, and for people to check back on their page.

“Tell em to stay tuned, to look us up on Facebook, you know this was a pretty costly event, but it was well worth it,” he said. “It was just unreal how people jumped in and helped, and again Spring Gap Farm in Cumberland Maryland, Kina Davis, she was the key component to this.”

“None of us knew each other before this ride … when all the other men flew in, that was the first time we ever met,” said Josh. “That is an example that it doesn’t matter where you’re from, you can come together for a great purpose.”

“That’s what we have to work for and strive for as Americans, is we have to understand that there’s gonna be disagreements,” said Josh. “But this hatred and bitterness that we’re dealing with today is gonna be the death of this nation if we don’t learn how to agree to disagree.”

Braving the elements, heavy snow, freezing rain, ice, and a few detours were some of the challenges faced along the way.

At one point, one of the experienced riders, Shawn Cummings, a rancher from New Mexico, was thrown off his horse when it lost its footing while crossing a small bridge over a creek.

“That was somewhat towards the beginning of the day so he rode the rest of the day in the cold, wet like that,” said Josh.

Ok. I’ve been holding this video all week. But since we are at the end of the ride I gotta release the video of the week. This is Shawn Cummings doing the cannon ball on the first day of the ride. Enjoy.

Kina said after resaddling the horse, and Cummings had mounted again, the horse proceeded to shake off the water like a dog would, again throwing its rider off.

“These guys bounce,” said Kina. “I’m sure he was sore but they’re cowboys, they’re tough.”

“The 15th of February is not the most pleasant day to ride out here in Maryland,” said Griffin. “Every guy here is cowboy enough to get it done.”

Griffin said they averaged 20-25 miles a day to show the president their appreciation.

“It’s a grassroots movement on every front,” he said.

Ramie Harper, a hat maker from New Mexico, built a hat for the president. Inside the hat, it was labeled: “Custom made for Donald J. Trump, president of the USA.”

Griffin called it: “The nicest cowboy hat that money can buy.”

Gavin Clarkson, Owner & Managing Director at Native American Capital, in an interview with Breitbart, said: “the Cowboys For Trump are riding to defend life.”

“This is not a political ride per-say, we support the president because he’s our president,” said Clarkson. “Regardless of what party you’re with.

The Cowboys arrived in Washington, on Feb. 22, completing their adventure. While they were not able to get their fine custom hat to the president, they got their message out to the public. Josh said talks are underway with the Whitehouse to have the hat delivered.