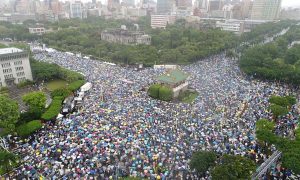 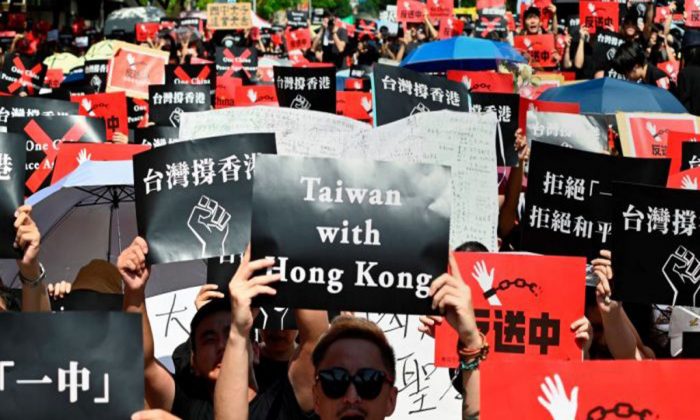 A number of Taiwan’s non-governmental organizations have called on Taiwanese citizens to participate in a parade scheduled for Sept. 29 that supports Hongkongers’ protest against the extradition bill. In an exclusive interview with the Chinese-language Epoch Times on Sept. 26, Hong Kong legislator Eddie Chu Hoi-dick noted that when facing the Chinese authorities’ suppression and encroachment tactics, cowardice and appeasement serve no use. He called on the people of Taiwan to stand hand-in-hand with Hong Kong citizens against the Chinese regime, as the regime wants to control both territories.

Chu, a Hong Kong social activist and politician, graduated from the Chinese University of Hong Kong where he majored in English Studies. In 2016, he contested the 6th Legislative Council election and won the election with 84,121 votes, the highest among all candidates, without any party backing.

Hong Kong and Taiwan Are on the Front line

Chu explained that the main purpose of his trip to Taiwan is to encourage Taiwanese to participate in the march, on Sept. 29, themed “Support Hong Kong’s fight against totalitarianism.” It’s part of a global event where rallies and parades will be held in more than 20 countries on the same day.

“In fact, the threat of communist totalitarianism is not an issue that only Hong Kong and Taiwan are facing, it is an issue the whole world must work together to resolve. Therefore, people all over the world should stand up against the Chinese communist regime. This is especially true for Hongkongers and Taiwanese, because we are on the front line of this battle,” Chu said.

He believes that Taiwan’s support for Hong Kong would be more noteworthy than support from other areas in this global campaign.

“The Taiwanese people’s voice has a special significance. Beijing claims that Taiwan is part of China, despite the fact that many Taiwanese are unwilling to be ruled by the CCP. If few Taiwanese show up at the march, the CCP could use this fact to manufacture fake news, telling mainland Chinese that Taiwanese willingly accept the ‘one country, two system’ approach and the majority of Taiwanese support the CCP. In a sense, the anti-communism march in Taiwan is the more important one.”

CCP Tactics to Impose Its Control Outside China

Chu also pointed out that the CCP will apply the same methods it has used to suppress Hong Kong protests to impose control in Taiwan.

In his opinion, the CCP has deployed four major tactics in Hong Kong: fake news and rumors, especially through Facebook, Line, and WhatsApp; police collusion with pro-communist triads; mass surveillance; and forcing people to support the CCP’s ideology by taking control of the local economy and pressuring company owners, like they did with Cathay Pacific.

Chu cited the recent assaults on Hong Kong streets to illustrate his point.

“In the past several days, some Hong Kong congressmen, journalists, and activists have been assaulted in the street for no reason. Usually they are hit on the head, causing heavy bleeding. The assaulters are not police officers. Their purpose is to create an atmosphere of terror in Hong Kong.”

“The CCP aims at extending these measures throughout the world, to consolidate its totalitarian control. It is a very dangerous trend.” Chu said.

In addressing fake news from the CCP, Chu called on the Taiwan government to enact new laws that resist communist infiltration and punish China-backed “red media.”

“In the past, Hong Kong was very loosely regulated in this respect. As a result, in the 1990s, almost all business-oriented media were bought out.” Chu said, “In addition, there is a mass fake news campaign in Chinese social media, from the U.S. presidential election, the Brexit referendum, Taiwan’s elections, to Hong Kong’s pro-democracy movement. This is a rather new phenomenon. Some social media users tend to stay in groups with similar political preferences, and rely on these groups for information. The CCP is very skillful at brainwashing these users—repeatedly bombarding such groups with similar fake news.”

According to Chu, a typical example is fake news about Joshua Wong, one of Hong Kong pro-democracy movement student leaders. The CCP started defaming Wong several years ago, claiming that he received military training in the United States. Very recently, Wong went to Taiwan asking for support for the Hong Kong protests. The CCP spread fake news saying that Wong harassed an attendant during his flight.

Chu said that Hong Kong’s situation is very similar to Taiwan’s. Both face the threat of CCP totalitarianism. “The CCP cannot tolerate Taiwan’s freedom of the press, universal suffrage, and citizen’s enthusiastic involvement in political affairs. Therefore, it tries to destroy Taiwan’s democracy with fake news.”

“In Hong Kong, local residents no longer trust those profit-driven media. The CCP therefore has to use a variety of methods to hoodwink Hong Kong citizens,” he added.

Taiwan Could Become A Protagonist

Chu commended Taiwanese people for providing support for Hong Kong protesters. For instance, fabric masks or gas masks have been removed from Hong Kong stores. Presently, they can only be obtained from Taiwan. However, Chu pointed more can be done.

“In fact, Taiwanese people should step up to become protagonists in this movement. I think this is something that the people of Taiwan have not fully realized.” He said, “If a pro-communist president is elected in the upcoming election, or if pro-communist forces dominate Taiwan’s legislative Yuan, the people of Taiwan will have to take to the streets, just as Hongkongers are doing today, and by then the situation will be more severe. Hong Kong and Taiwan face the same danger. We need to learn from each other, support each other, and try to understand the CCP’s bullying methods by exchanging information with each other.”

Cowardice and Appeasement Not Effective

Not all Hong Kong citizens side with the protesters, even though many of them do not like the CCP.

“Many Hong Kong people still think that it’s better for civilians to give in to the CCP than to resist it, because the CCP always gets its way. In their opinion, if we resist, the outcome would be worse.” Chu explained.

“However, if you look at the 22 years following Hong Kong’s handover, you will see how the CCP aggressively pushes its agenda, regardless of whether we resist or not. Even if you merely wish to maintain the status quo, it’s just impossible for this wish to be granted. The CCP will definitely implement changes to achieve its political agenda.”

According to Chu, the CCP has a blueprint for Taiwan. “The first step was to attract Taiwan’s capital to China, which helps China develop its economy. Now, the CCP is very rich. It will use the money to buy your media, factories, and all industries, and thus, erode democracy through its control of Taiwan’s economy. The United States and Australia are facing the same problem.”

“The CCP plans are no longer a secret.” He added, “If we wishfully think that we will be fine as long as we do not provoke the CCP, we are fooling ourselves.”

In the end, Chu urged the people of Taiwan to take concrete actions to resist any encroachment of the CCP into their government.

“Just like the situation in Hong Kong, there is simply no other option. For Hongkongers, if we do not oppose the CCP, we will fall prey to it. Similarly, people of Taiwan must find a strategy to resist the CCP. Otherwise, Taiwan will lose its allies one after another, and in the end run into a deeper crisis as a result of constant bullying from the CCP.”