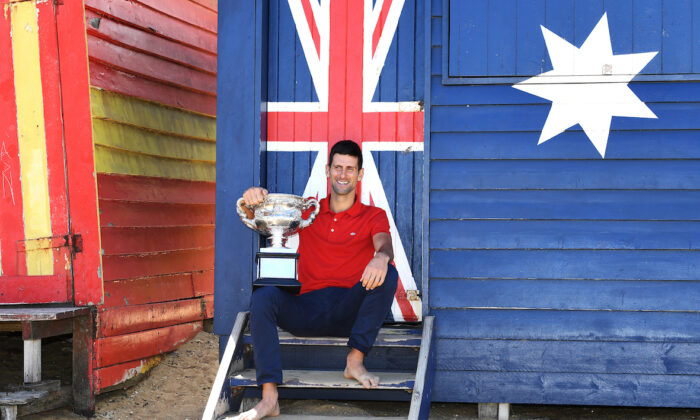 Novak Djokovic of Serbia poses for photographs on Brighton Beach with the Norman Brookes Challenge Cup following his Men's singles finals win against Daniil Medvedev of Russia at the Australian Open in Melbourne on Feb. 22, 2021. (AAP Image/Dave Hunt)
Australia

Tennis world No.1 Novak Djokovic recovered from COVID-19 before travelling to Australia and met the requirements for a vaccination exemption as relayed to his team by his Australian contacts, his lawyers will argue.

The 34-year-old Serb on Sunday remained in immigration detention in Melbourne after having his visa cancelled by Australia’s federal government.

His case returns to court on Monday, with Djokovic fighting for the right to remain in the country and the chance to retain his Australian Open title.

Documents released by the Federal Court on Saturday show Djokovic contracted COVID-19 on Dec. 16 and was free from symptoms ahead of his arrival in Australia on Jan. 5.

The tennis champion’s lawyer will argue that he met the criteria for a temporary exemption under the guidelines of the Australian Technical Advisory Group on Immunisation (ATAGI). And furthermore, that he was denied procedural fairness during the decision to revoke his temporary visa.

Court documents cite the ATAGI advice, including: “COVID-19 vaccination in people who have had PCR-confirmed SARS-CoV-2 infection can be deferred for a maximum of six months after the acute illness, as a temporary exemption due to acute major medical illness.”

Djokovic provided evidence that he was diagnosed with COVID-19 on Dec. 16.

However, ATAGI has since changed its advice to not recognise prior infection.

“Mr. Djokovic had received, on 30 December 2021, a letter from the Chief Medical Officer of Tennis Australia recording that he had been provided with a ‘medical exemption from COVID vaccination’ on the ground that he had recently recovered from COVID,” the court documents read.

In a letter leaked to media, Tennis Australia rejected that players were knowingly misled, insisting organisers had followed “instructions.”

“I consider that Tennis Australia would have facilitated his medical exemption and Australian Travel Declaration based on information (Djokovic) provided to them. As such, I don’t consider these constitute extenuating circumstances beyond (Djokovic’s) control.

“I apply significant weight in favour of visa cancellation for this factor,” the representative said.

After his arrival on Wednesday evening, court papers show Djokovic had a sleepless night as he was questioned by authorities at times including 4 a.m., before the visa revocation at 7:42 a.m.

A partial transcript of that interview included “you have stated you are not vaccinated against COVID-19.”

Djokovic has previously declined to confirm his vaccination status.