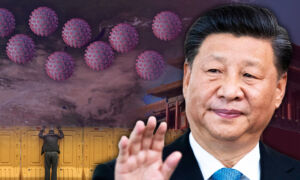 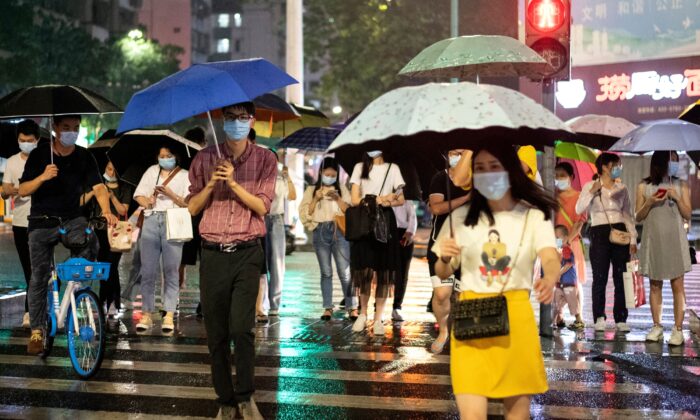 People wearing protective face mask walk under their umbrellas as it rains in Shenzhen in China's southern Guangdong province on May 22, 2020. (Photo by NOEL CELIS/AFP via Getty Images)
INSIDE CHINA

Official reports are indicating that the Chinese Communist Party (CCP) virus, commonly known as novel coronavirus, is spreading in Guangzhou after an initial case of local transmission was reported last week in the city of 15.3 million people. Meanwhile, infections have also appeared in the nearby megacity of Shenzhen in China’s southern coastal province of Guangdong.

The reports have triggered mass testings in the government district of Guangzhou, as more neighborhoods are assigned to be medium-risk areas, and residents rush to get vaccinated, causing a temporary vaccine shortage across the city. Officials have claimed that the source of this round of outbreak in the province is still unknown, while some netizens suspect that communist party officials are covering up the truth.

On May 27, local authorities reported nine more locally transmitted cases across two districts in Guangzhou city, all infected with the more deadly Indian variant of the virus. Eight are in Liwan District, where the first local case in the outbreak was reported—a 75-year-old woman surnamed Guo. The ninth case is in Haizhu District. They had all come into contact with Guo.

According to the official announcement, the cluster is related to a dim sum restaurant called “Another Dim Sum Place” in Liwan district, where Guo and some of the patients dined on the same morning.

Meanwhile, five cases have been reported in Shenzhen. The patients were all employees for the same company, and all were infected with the UK variant of the virus, according to official reports.

On May 26, authorities in Guangzhou upgraded the risk rating for the eastern Heyuan community in Liwan to a medium-risk area, and ordered all 1.23 million residents in Liwan district get tested within two days.

A large number of residents queued up for testing late into each night. At one point, testing reagents ran out at some of the test sites, angering residents who criticized the authorities for the chaotic situation and poorly planned arrangements. A resident said, “I am not afraid of not being tested but am afraid of mass infection caused by (gathering for) the mass testing.”

A local resident told The Epoch Times, “many high rank officials and military officials live in Yuexiu district. The situation there is like preparing for a fierce enemy to attack.”

On May 26, all residents of Dongshan neighborhood in Yuexiu District were tested for COVID-19 overnight. Residents were notified that all schools were closed.

An online video showed a long queue at a testing site late into the night. The person taking the video said: “It’s miserable, there are so many people.”

After Guo was diagnosed, the official announcement stated that her infection with the Indian variant could not be ruled out as an “accidental exposure caused incidental infection.”

Netizens expressed dissatisfaction with the vagueness of the official statement, questioning what “accidental exposure” and “incidental infection” meant. One asked, “How come an elder woman who stayed in Guangzhou was suddenly infected with the Indian variant?” Another questioned, “Are there unreported chains of infection in Guangzhou?”

The Epoch Times contacted the Liwan District CDC and Guangzhou CDC on May 27 for comment but has received no response.

With the quick spread of the outbreak, unvaccinated residents have been seen rushing to get vaccinated while dealing with shortages in supply due to the sudden urgent demand.

Videos on social media show people lining up to get vaccinated, with some badly-behaved individuals even fighting and breaking through an iron gate to get ahead at a vaccination site.

Many vaccination sites are overcrowded.

State-controlled media reported that some vaccine sites had already stopped walk-in vaccinations, offering only appointments due to the vaccine shortage.

Netizens have been raising questions for the authorities, asking, “Why does everyone have to be tested after so many have been vaccinated?” and “Does the rush to get the vaccinated indicate that the public does not trust the official number of the infected cases?”