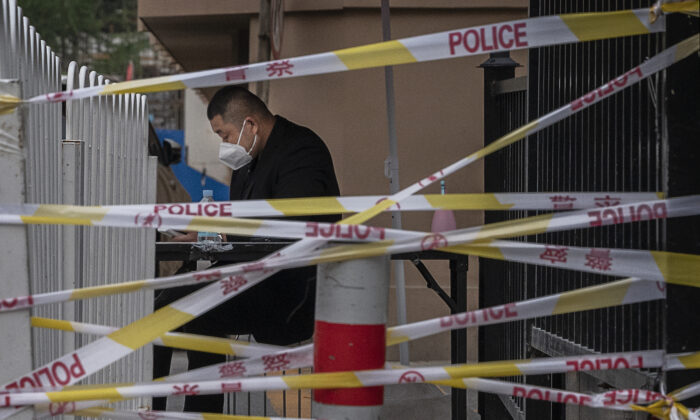 A security guard is seen behind police tape near the Heaven Supermarket and other nightclubs that are at the center of the city's latest COVID-19 outbreak in Beijing. China's capital is working to control a fresh COVID-19 cluster after dozens of people linked to a local nightclub tested positive for the virus. June 13, 2022. (Kevin Frayer/Getty Images)
INSIDE CHINA

The outbreak of COVID-19 in a bar in Beijing’s commercial area has rapidly spread in the capital city, including to the district where the Chinese regime’s central governmental departments are located, and has caused the lockdown of famous tourist areas in the city center.

Since last week, the outbreak at Paradise Supermarket Bar in Chaoyang District has directly affected at least 14 of Beijing’s 16 districts.

The Beijing Center for Disease Control and Prevention announced on June 15 that from June 9 to June 15, a total of 327 people were infected with COVID-19 due to the outbreak in the bar, including 7 bar employees, 226 people who had been in the bar, and 94 people who were infected by the other groups. Those under the age of 30 account for more than 85 percent of the infected.

According to information released by Beijing Chaoyang district, the Paradise Supermarket Bar, epicenter of this new outbreak in the capital, is located in Sanlitun—a famous bar area in the city. It’s also one of the most famous business districts in the city, where international businesses’ Beijing offices and foreign embassies are located. At present, 74 bars have been closed and more than 700 catering businesses have stopped dine-in service in the area.

Authorities have required anyone who was at the Paradise Supermarket Bar from 8:00 pm on June 6 to 8:00 am on June 7 to report to the epidemic control officials immediately.

The outbreak has also caused closure of the popular tourist areas in the city center.

On June 15, a waitress at Huguo Temple Snack Bar told The Epoch Times that the entire Huguo Temple Snack Street was closed, because Paradise Supermarket Bar’s dormitory is located on the street, and is where the infected bartender lives.

She said, “This is the most famous snack street in Beijing. It happened here, the impact of it is great.”

Yu Ming (pseudonym), a hotel manager in Huguo Temple Street, told The Epoch Times that the area around Huguo Temple, a famous tourist site and one of the eight major temples in Beijing, has been locked down. “Many checkpoints have been set up in the surrounding areas, everywhere is blocked.”

“Six or seven confirmed cases have been found in the Huguo Temple area. Now all the people living in our hotel are epidemic prevention personnel, and many doctors and nurses have come in to do nucleic acid testing for the residents.”

In the nearby famous scenic Shichahai area, including Houhai Lake area, which is next to Zhongnanhai where the regime’s central government is located, local residents told The Epoch Times that more than ten buses came to take people away due to the outbreak related to the bar in Chaoyang.

Li Zi (pseudonym), who lives in Houhai area, told The Epoch Times that there are many bars by the river and a customer tested positive for COVID, which caused the closure of all businesses in the Shichahai area and adjacent Beihai Park area.

Li said: “The epidemic caused by the bar in Chaoyang is severe. People who visited that bar go everywhere, not only have they been to Shichahai, but have traveled all over Beijing.”

The Epoch Times obtained a video showing the buses taking people away and the lockdown of the areas in Beijing.

At present, the epidemic related to the bar is still spreading. Beijing has added three new medium-risk areas in Chaoyang District.

One of the people who visited the bar and tested positive had flown to and from the mega city Guangzhou in south China on June 8. The person is a crew member of the airline, according to an epidemic notice issued by Shunyi District of Beijing.

Under the Chinese communist leader Xi Jinping’s zero-COVID policy and strict control measures, the outbreak in Beijing continues to rise.

Hong Ning and Luo Ya contributed to the report.