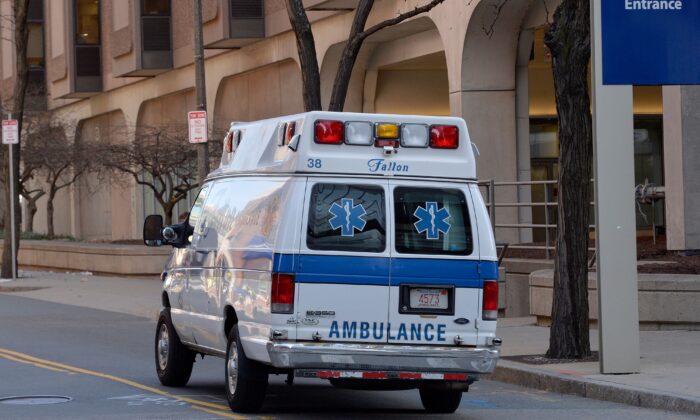 An ambulance drives by Brigham and Women's Hospital, which was setting up a a coronavirus testing site, in Boston, Mass., on March 7, 2020. (Joseph Prezioso/AFP via Getty Images)
Local News

Gov. Charlie Baker co-issued the update (pdf) with the Massachusetts Health & Hospital Association (MHA) in order to “preserve hospitals’ ability to respond to COVID-19 and to ensure that there is acute care inpatient capacity.”

The Health and Human Services (HHS) cited critical staffing shortages “stemming from the pandemic,” which has contributed to the loss of approximately 500 medical/surgical and ICU hospital beds across the Commonwealth.”

“These factors, coupled with the current high census level and annual increases in hospitalization commonly seen during the period post-Thanksgiving through January, require this concerted effort to preserve inpatient capacity,” it added in a statement.

“The current strain on hospital capacity is due to longer than average hospital stays and significant workforce shortages, separate and apart from the challenges brought on by COVID,” Secretary of Health and Human Services Marylou Sudders said.

Any hospital that has reached its capacity and transferred patients, or has sought help from another hospital as a result, will be required to postpone any scheduled procedures that are not medical emergencies.

To be exempt from the public health order, hospitals must participate in regional “Health and Medical Coordinating Coalition meetings” and regularly accept transfers from other hospitals.

Furthermore, 80 of the 154 patients in ICU were intubated to assist with breathing.

The Massachusetts DPH was able to authorize its commissioner to pass the order after Republican Gov. Charlie Baker declared a state of emergency on May. 28 and authorized Acting Commissioner Margret R. Cooke to “prepare for, respond to, and mitigate the spread of COVID-19,” the order states.

More than 1,000 hospitals across the United States have also been reported to be “critically” short on staff, according to data released by the HHS earlier this week.

A September study conducted by Harvard found that the shortage of critical care nurses intensified during the first wave of the pandemic, which “interrupted an already restricted pipeline of new nurses, limiting clinical placements, and increasing wait times for licensing exams.”

“As a practical matter, this policy may result in exacerbating the severe workforce shortage problems that currently exist,” American Hospital Association President and CEO Rick Pollack stated in a Sept. 9 statement.

“Mandating that [vaccine] really works a hard step on the smaller hospitals because we don’t have an extra pool of nurses to draw from out there,” Magee said.