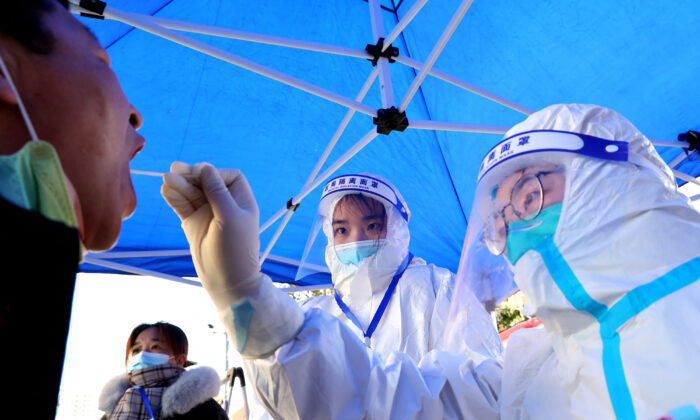 A resident is swabbed for a nucleic acid test for COVID-19 in Lianyungang, in eastern China's Jiangsu Province on Feb. 18, 2022. (STR/AFP via Getty Images)
CCP Virus

The Chinese regime announced COVID-19 outbreaks in the north, south, east, and west of the country on Feb. 19 that are primarily Delta and Omicron variants.

Officials from the Chinese National Health Commission said at the press conference on Saturday that the regime has started arranging for all residents over 18 to receive a booster shot, although they couldn’t evaluate the effects of the regular vaccination nor the booster.

Just like the first two vaccinations, the Chinese regime distributed vaccines from local manufacturers for the booster shots.

On Feb. 19, residents from Suzhou city, where people are facing the Omicron variant of the coronavirus, described their situation to the Chinese edition of The Epoch Times.

“A child that lives at Building 11 was infected with the CCP virus [and diagnosed on Feb. 18]. All the about one hundred residents from several dozens of families in the building were removed to quarantine centers in the night,” a resident surnamed Wang at Xingshengke residential compound in Suzhou Industrial Park said in a phone interview.

He explained that he and everyone living in other buildings in the residential compound were locked inside the compound after the child’s infection was detected.

A resident surnamed Ji at 150 Yangpu Road, Suzhou Industrial Park, said the regime locked down the whole park, an area of 107 square miles with a population of 1.13 million, and people weren’t allowed to enter or leave the park without a special permit.

Ji said the outbreak in the park was serious, and some workers were recently diagnosed including someone employed at the Bosch factory.

“Five factories [in the park] are sealed, and workers can’t leave the factories,” Ji said. “There’s about 5,000 foreign invested factories in the park.”

State-run Shanghai Observer reported on Feb. 19 that the COVID-19 patients in Suzhou are from Wuzhong, Wujiang, Gusu, and Xiangcheng districts, as well as Changshu and Zhangjiagang prefecture-level cities.

The Chinese regime rules all parts of the country with the same policies. Suzhou’s current status reflects the situation in other Chinese cities that had recent COVID-19 outbreaks.

On Feb. 19, the China’s National Health Commission said that the current COVID-19 outbreaks in Guangdong Province are mostly caused by the Omicron variant, while the virus spreading in Inner Mongolia is primarily the Delta variant. The commission didn’t reveal the variant types in other regions.