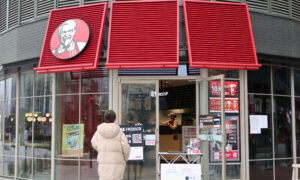 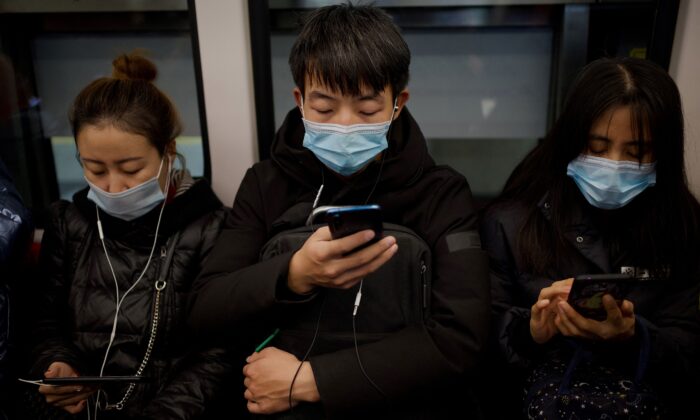 People wearing face masks use their mobile phones on a subway in Beijing on Dec. 19, 2020. (NOEL CELIS/AFP via Getty Images)
INSIDE CHINA

More Chinese cities announced new CCP virus cases over the weekend, with authorities announcing “wartime” mode one by one.

“At present, the epidemic in our country has entered the stage of ‘multi-point outbreak.’ … Over 20 cluster outbreaks have occurred in different regions,” Zhang Boli, a member of the Chinese Academy of Engineering and president of Tianjin University of Traditional Chinese Medicine, wrote in his article published in state-run Health Times on Dec. 19.

Some locals in the capital of Beijing and southwestern city of Chengdu told the Chinese-language Epoch Times in interviews that they heard of more diagnosed cases than authorities announced. They were skeptical of the authorities’ narrative.

Others complained that the lockdown policies were too restrictive and caused them severe mental stress.

The outbreak in Beijing stemmed from a 27-year-old male originally from northeast China’s Jilin Province, according to authorities.

He arrived in Beijing via Hong Kong. He tested negative while being confined for 14 days at a quarantine center. But after he checked out, he began to develop a fever and diarrhea.

The new patients were waitresses at a dumpling restaurant that the man visited.

After leaving quarantine, the man checked into the Hanting Hotel in Chaoyang district.

Mr. Li operates an auto body shop near the Hanting Hotel. He told the Chinese-language Epoch Times that his shop has been shut down by authorities since Dec. 15 and the hotel has been fully sealed off with an iron wall.

Li said he heard that the Jilin man has spread the virus to another man while staying in the neighborhood.

“The Dashanzi [area] was locked down [after the second man was diagnosed]. All residents were quarantined at home and received nucleic acid tests,” Li said, adding that the area was home to thousands.

The case Li mentioned has not been announced by authorities. The Epoch Times could not independently verify the information.

On Saturday, Changping district in Beijing started to test residents because one of the diagnosed waitresses visited the district before being quarantined.

Shijingshan district in Beijing, where there were neither officially diagnosed cases, nor indication that patients had visited it recently, announced that it had entered “wartime” status on Saturday.

This is the first time that a local government announced “wartime” without publicly confirming infections.

In Dalian city, supermarket shelves were cleared after authorities confirmed new cases in the past few days.

“Bread, sausages, milk, instant noodles … all sold out!” a restaurant owner who gave the pseudonym Fang Jun said. “This year is very tough for us. We only have one goal: to survive!”

Other cities within nearby Heilongjiang Province, Dongning and Suifenhe, continued to see new cases.

Meanwhile, the cities of Guangzhou, Shenzhen, and Dongguan in southern Guangdong Province, all announced new clusters.

In the southwestern city of Chengdu, locals told the Chinese-language Epoch Times that they didn’t trust the regime’s announcements, and felt frustrated about the quarantine policy.

“We, 2,000 villagers, are locked inside our home. We are only allowed to leave our door once per day. Nobody told us how long we would be locked inside. How can we live?… We are very angry. No officials are taking care of us,” said He Fang (pseudonym).

He complained that all food has become very expensive and people couldn’t earn an income due to the lockdown.

Another Chengdu resident was not under the lockdown policy because he lived in a “low-risk” area, but said he was still prevented from visiting Xi’an city. He had taken COVID-19 tests, got negative results, and then bought a train ticket.

But upon arriving at the Xi’an platform, authorities stopped him from leaving the train station.

“I had no solution and had to take another train and come back,” he said.