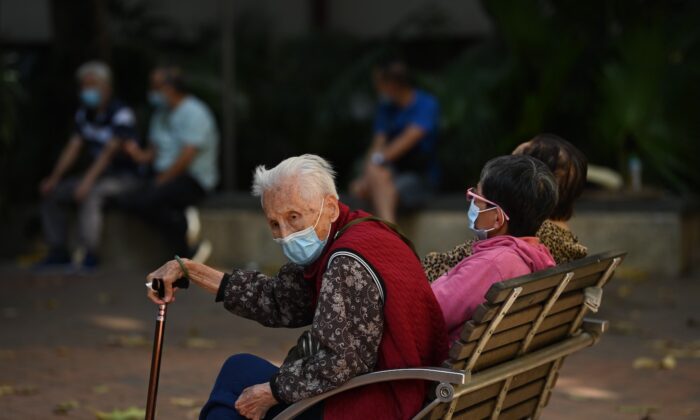 “Brain fog” is a common symptom for many people after being infected with COVID-19.

Research in the United Kingdom found that about one in four COVID-19 patients experiences symptoms of brain fog, including memory loss, mental fatigue, lack of concentration, and emotional distress.

Brain fog, as the name implies, is a sudden “obscuration” of the brain, Dr. Mak said.

“The advantage of fog is that it will disperse, so it will slowly reverse with time. It comes fast in a hurry, but it will go away with time.”

While most symptoms of brain fog will clear up on their own, Dr. Mak said elderly people should get timely medical attention if they experience severe memory loss or become unable to take care of themselves after being infected with COVID-19. It may be an organic lesion of the brain, he said.

Dr. Mak said he knew of the case of a 70-year-old man who had been in good health until he contracted COVID-19, after which his mind deteriorated so much that he couldn’t even recognize his son or grandson.

At first, the man’s children thought it was brain fog from which he would slowly recover, but after several months, the patient’s condition worsened. He went to a doctor and found out that he had suffered a severe vascular stroke.

Common vascular stroke can affect limb function or even cause hemiplegia, Dr. Mak said. If a stroke happens in the part of the brain responsible for memory or emotion, it will cause memory damage. It was later found that the patient forgot to take blood pressure medicine during the infection, which may have resulted in vascular brain degeneration.

When asked how long an elderly person’s brain fog lasts before they need to seek medical attention, Dr. Mak said that time is not the key factor.

“When the symptoms have worsened to the point where they affect [the elderly person’s] daily life, and [they are] unable to take care of themselves, they should no longer wait,” he said.

“The earlier the treatment, the better the recovery. Doctors will conduct psychological assessments, blood tests, and brain scans to diagnose organic brain degeneration.”

As for the symptoms of brain fog in young or middle-aged people, Dr. Mak said most people’s symptoms will gradually improve. He suggested that patients with brain fog should pay attention to their living habits to accelerate brain self-repair.

“Other than taking more rest, it is also necessary to exercise regularly so to promote the transmission of oxygen to the brain,” he said.

Other than brain fog, people’s emotional health amid the pandemic also deserves attention. With the pandemic lasting for nearly three years, and epidemic prevention measures affecting the economy and people’s lives, many people have suffered from emotional problems, ranging from insomnia and anxiety to depression, reluctance to socialize, and loss of motivation to work.

Even before the pandemic, it wasn’t uncommon for Hong Kong residents to suffer from mental problems.

According to a door-to-door survey conducted by the Chinese University of Hong Kong in 2015, 13.3 percent of Hong Kong residents suffered from anxiety, depression, and other common mental problems. Among them, only 26 percent sought psychological counseling in the past year, and less than 10 percent went to see a doctor for mental problems.

Dr. Mak believes that health education in Hong Kong is very inadequate, with many people paying attention to physical examinations below the head while ignoring the health of the brain.

“On emotional and mental problems, a lot of people think they’re only related to character and willpower, but willpower comes from people’s brains,” he said.

“Unfortunately, the brain is also a very fragile organ in our body. Why do we need such a strong skull to encase the brain? It is for this reason.”

Dr. Mak urged the public to consult a doctor as soon as possible if they notice any emotional problems during the pandemic.

Asked about self-assessment questionnaires for mental status circulating among the public, Dr. Mak believes that self-assessment is often more subjective and recommends seeking an objective assessment from a psychologist or doctor.

“It is not ideal to either underestimate one’s problems or overestimate them and scare themselves,” he said.