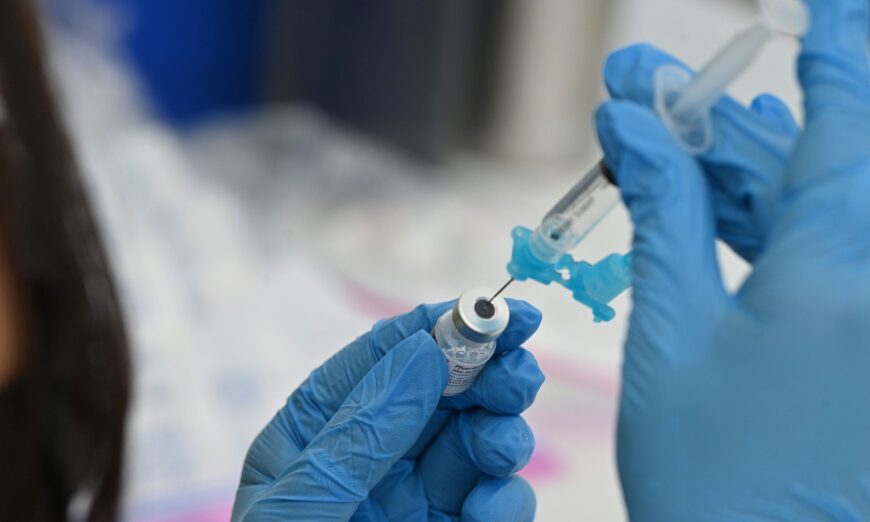 A health care worker fills a syringe with Pfizer's COVID-19 vaccine in a file image. (Robyn Beck/AFP via Getty Images)

COVID-19 vaccine boosters provided small boosts for people who have recovered from COVID-19, according to a new study.

Measuring the effectiveness of the Moderna and Pfizer boosters against the BA.1 Omicron subvariant, researchers found that a booster upped protection against infection by just 6.1 percent for those who had a documented prior infection or natural immunity.

The effectiveness of a primary series 14 to 149 days after a second dose was pegged as 41 percent for the group. A booster brought the protection to 47.1 percent.

Excluding people with a documented prior infection, the booster increased infection more.

People without documentation of a COVID-19 infection had 27.1 percent protection after a primary series. A booster increased that to 54.1 percent.

U.S. researchers including Dr. Margaret Lind, an epidemiologist at the Yale School of Public Health, performed the research. They analyzed COVID-19 tests that were entered into the Yale New Haven Health system between Nov. 1, 2021, and April 30, 2020. They compared 11,307 COVID-19 cases, including 672 cases among people who had a documented prior case, to 130,041 controls, including 10,473 with documentation of a prior case.

The paper was published on Dec. 1 by PLOS Medicine. It received funding from the Beatrice Kleinberg Neuwirth Fund and Yale.

Pfizer and Moderna didn’t respond to requests for comment.

The boosters administered during the time period studied have since been replaced by updated versions.

A number of studies have analyzed the protection that people enjoy after recovering from COVID-19 and found that the protection is higher than that conferred by vaccines. Both forms of protection have waned against infection and, to a smaller degree, severe illness, but natural immunity has held up better against both infection and severe disease.

More recent studies have found that people who were sickened with strains before Omicron emerged in late 2021 have less protection against Omicron and its subvariants, but that prior Omicron infection generally protects well against reinfection. For severe disease, any infection serves as strong shielding.

Many people around the world have had at least one COVID-19 infection, according to seropositivity surveys.

Some scientists promote so-called hybrid immunity, or vaccination despite prior infection. One recent paper found that people with infections prior to Omicron had 44 percent and 81 percent protection against infection and associated hospitalization, respectively, but that the protection was higher among those with one, two, or three doses of a vaccine.

The new study identified poor effectiveness from both a primary series and a booster against infection, particularly among the naturally immune.

For people with a prior infection, the figures were 1.3 percent, 5 percent, and 9.2 percent.

Adjusted effectiveness—effectiveness after correcting for factors such as age—determined that effectiveness among the non-naturally immune group peaked at just 27.1 percent and dropped to 13.6 percent. A booster at or after 14 days increased that to 54.1 percent, but boosters quickly wane, other research has shown.

Among those with a documented prior infection, and after adjustments, effectiveness peaked at 41 percent and dropped to 32.1 percent. A booster increased effectiveness to 47.1 percent.

The study is the latest to show that a primary series—two shots—of one of the messenger RNA vaccines, both the Pfizer and Moderna vaccines, provides little protection against infection and severe illness.

One recent paper, for instance, pegged effectiveness for immunocompetent individuals against hospitalization at just 37 percent following a primary series, including 13 percent for people aged 18 to 49.

A booster increased the shielding to 65 percent, the American researchers said.

For people with compromised immune systems, the shielding was estimated to be 49 percent, increasing to 69 percent after a booster.

Another paper, from U.S. scientists, concluded that a primary series and an updated booster provided 50 percent or lower protection against symptomatic infection.

And a third paper estimated that two doses against infection during the Omicron era provided negative 4 percent protection, with a third dose increasing that to just 31 percent.