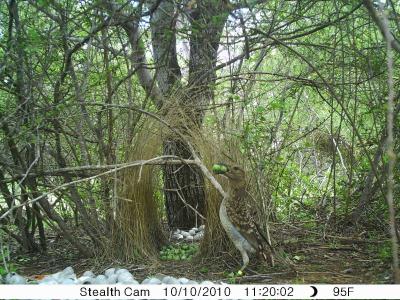 An international team of scientists has uncovered the first evidence of a non-human species cultivating plants for use other than as food. (University of Exeter)
Science

Some male Australian birds use fruits as decorations to make themselves more appealing to mates.

Bowerbirds occur in Australia and Papua New Guinea, and are so called because males build special structures for their courtship displays, adorning them with colorful objects to attract females.

The scientists found that the bowers there are surrounded by more potato bushes, Solanum ellipticum, which have bright purple flowers and green fruit, than other areas.

They observed that fruits from plants close to bowers are slightly greener and, when tested, males were found to choose this color fruit over others.

“Until now, humans have been the only species known to cultivate plants for uses other than food,” said Madden in a press release.

“We grow plants for all kinds of things—from drugs, to clothing, to props that we use in our sexual displays such as roses—but it seems we are not unique in this respect.”

Females prefer bowers with many fruits, but when these dry up, the males move them to surrounding areas. As males maintain their bowers for up to a decade, keeping the area free of weeds, the seeds may germinate and flourish.

This behavior leads to higher numbers of potato bush plants near bowers, rather than the birds choosing to build their bowers where there are more plants.

“We do not believe bowerbirds are intentionally growing these plants, but this accumulation of preferred objects close to a site of habitation is arguably the way any cultivation begins,” Madden concluded.

“It will be very interesting to see how this mutually-beneficial relationship between bowerbirds and these plants develops.”

The study was published in Current Biology on April 24.