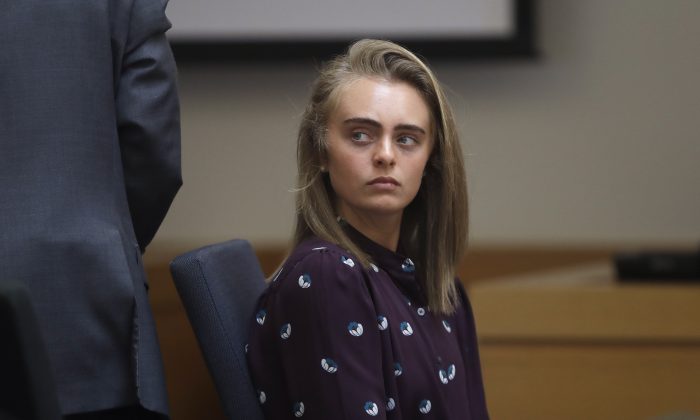 An involuntary manslaughter conviction for a woman who sent dozens of text messages to her boyfriend encouraging him to commit suicide, which he eventually did, was upheld on Feb. 6.

The case went before the Massachusetts Supreme Court after attorneys for Michelle Carter appealed a conviction from a lower court.

She was deemed responsible for the July 2014 suicide of her boyfriend Conrad Roy III, 18.

“The evidence against the defendant proved that, by her wanton or reckless conduct, she caused the victim’s death by suicide,” the state Supreme Court said in the ruling (pdf). “Her conviction of involuntary manslaughter as a youthful offender is not legally or constitutionally infirm. The judgment is therefore affirmed.”

Carter was 17 when she drove her boyfriend to kill himself.

The Supreme Court said that evidence indicated that Carter’s messages “verbal conduct overwhelmed whatever willpower the victim had to cope with his depression, and that but for the defendant’s admonishments, pressure, and instructions, the victim” wouldn’t have killed himself.

Carter and Roy met while they were both visiting relatives in Florida in 2012 and maintained a long-distance relationship, often communicating over the phone or through text messaging. They frequently spoke of Roy’s fragile mental health, including his suicidal thoughts, and he attempted suicide several times between the time they met and the time he killed himself.

Carter initially urged Roy to seek help for his mental illness but things changed when he declined her request to go with her to McLean Hospital, where she was planning to seek treatment for an eating disorder.

The MA Supreme Judicial Court has upheld the conviction of Michelle Carter. She will now serve 15 months of a 2.5 year sentence for involuntary manslaughter for encouraging her boyfriend, Conrad Roy, to kill himself. https://t.co/SLEgohotJF pic.twitter.com/pRvSbfbtme

“As the victim continued researching suicide methods and sharing his findings with [Carter], [she] helped plan how, where, and when he would do so, and downplayed his fears about how his suicide would affect his family,” the court stated. In one text message, she wrote: “I honestly feel like they can except [sic] it. They know there’s nothing they can do.”

In another, she added: “Everyone will be sad for a while, but they will get over it and move on.”

“She also repeatedly chastised him for his indecision and delay,” at one point making him “promise” to kill himself,” the judges noted.

.From the SJC ruling related to Conrad Roy’s suicide and Michelle Carter’s involvement?

“…the defendant helped plan how, where, and when he would do so,”

“She also repeatedly chastised him for his indecision..” @boston25 pic.twitter.com/26uPUXUT6h

“I believe some people have no soul, no conscience,” Lynn Roy told Dr. Oz, reported Boston 25. “I think when I wake up in the morning and I realize he’s not here with me, that’s the most difficult for me.”

She said that she didn’t understand why Carter encouraged her son to kill himself.

“I would just ask her why, I don’t understand. Maybe give me some reasons why she would have encouraged him and bullied him, because I think the way she acted with him was bullying him,” she said. “I feel worse for her mother than for myself, I know the son I raised, I know the son that I have.”

When they learned that Carter’s sentence was held pending the court’s ruling, family members said they were outraged.

“I was just sick to my stomach [at] the fact that she can just be free and my cousin, he’s not here. Two-and-a-half years isn’t enough,” Roy’s cousin Makenna O’Donnell said during an interview with “Good Morning America.” “It’s not enough. She should be behind bars.”

O’Donnell said that Carter being free while Roy was dead was jarring.

“I just don’t understand how somebody can be free, knowing that she deliberately told [Roy] to get back in the car,” O’Donnell said. “She gets to sleep in her own bed tonight. She gets to wake up with her family, meanwhile, where’s Conrad? Where’s Conrad? He’s watching us from up above, he’s not gonna be here anymore.”