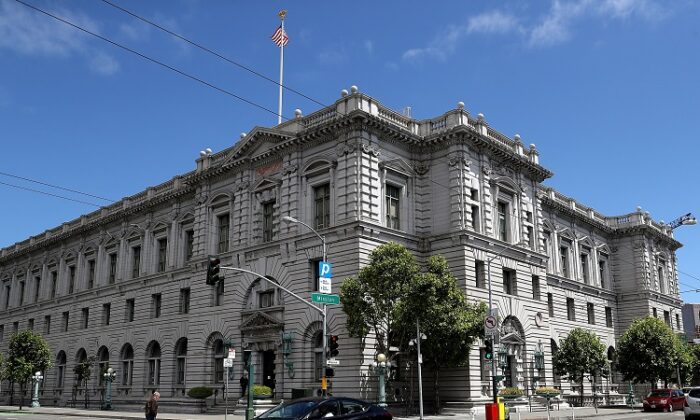 A view of the Ninth U.S. Circuit Court of Appeals in San Francisco on June 12, 2017. (Justin Sullivan/Getty Images)
By Micaela Ricaforte

A federal appeals court will reconsider a previous ruling requiring the San Jose Unified School District to recognize a Christian student club despite the district’s objections to the group’s policy that forbids LGBT students from club leadership positions.

The 9th U.S. Circuit Court of Appeals Jan. 18 vacated a panel’s 2–1 August decision, which found the school district discriminated against the Fellowship of Christian Athletes’ (FCA) recognition as an official club in the district, based on religious beliefs.

The majority of active judges in the U.S. Circuit recently voted to have the case reconsidered by an 11-judge panel, according to a Jan. 18 order. A new hearing is set for March 20 in Pasadena, California.

But, Daniel Blomberg, an attorney for the athletes, told the Epoch Times in an email he is “confident” the court will continue to protect the club’s religious liberty.

“Students in the district have a First Amendment right to support each other and join together in fellowship as an FCA student club,” he said. “We are confident the courts will continue to protect FCA’s ability to choose leaders who are committed to its religious mission and its right to exist on campus just like every other student club.”

The Fellowship of Christian Athletes has more than 7,000 clubs on school and college campuses nationwide.

The club, along with two students, sued the district in 2019 when it stopped recognizing the organization as an official club after another student brought to the administration’s attention a “Statement of Faith and Sexual Purity” that student club leaders were required to sign.

The statement says sex should only occur in a marriage between a man and a woman, and that student club leaders should step down if they are “found being involved in a lifestyle that does not conform.”

The district said the policy discriminated against LGBT students by prohibiting them from becoming club leaders.

Additionally, Lee said in the opinion, the district did not behave in a neutral manner toward the club as legally required.

“Under the First Amendment, our government must be scrupulously neutral when it comes to religion: It cannot treat religious groups worse than comparable secular ones,” Lee stated. “But the school district did just that.”

A spokesperson for San Jose Unified was not immediately available for comment.