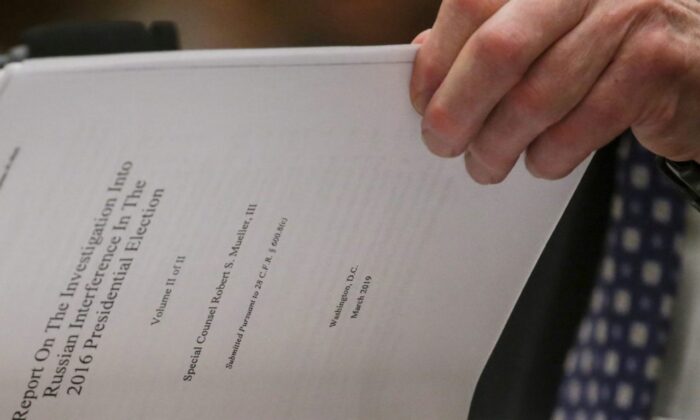 Former Special Counsel Robert Mueller references a copy of his report as he testifies before a House Judiciary Committee hearing on the Office of Special Counsel's investigation into Russian Interference in the 2016 Presidential Election on Capitol Hill in Washington on July 24, 2019. (Leah Millis/File Photo/Reuters)
US News

The U.S. Court of Appeals for the D.C. Circuit issued an emergency stay of the release of grand jury materials from special counsel Robert Mueller’s investigation.

The panel of three judges said on Oct. 29 that the court was granting the request for an emergency stay pending appeal.

“The purpose of this administrative stay is to give the court sufficient opportunity to consider the emergency motion for stay pending appeal should not be construed in any way as a ruling on the merits of that motion,” the panel wrote.

The ruling came after U.S. District Judge Beryl Howell ruled the Department of Justice must give grand jury material to the House Judiciary Committee by Wednesday.

Howell, also appointed by Obama, said that the case was an exception to the rule that prohibits disclosure of grand jury materials.

Howell ordered the department to provide the House with “all portions of Special Counsel Robert S. Mueller III’s Report on the Investigation Into Russian Interference in the 2016 Presidential Election that were redacted pursuant to” grand jury restrictions.

The department was also told to hand over any underlying transcripts or exhibits referenced in the portions of the Mueller report that were redacted with the same restrictions.

The department filed an appeal on Oct. 28. The filing also included the request to issue a stay of Howell’s order while the appeal is pending.

“A stay is warranted because, without a stay, the department will be irreparably harmed,” the department wrote in its notice to the court. “Once that information is disclosed, it cannot be recalled, and the confidentiality of the grand jury information will be lost for all time.”

It said that Howell’s ruling “represents an extraordinary abrogation of grand-jury secrecy.”

The House Judiciary Committee responded the next day by urging Howell to ignore the department’s request for the emergency stay.

“This court should deny the stay sought by the Department of Justice so that the Committee on the Judiciary of the U.S. House of Representatives can promptly access grand jury materials essential to its urgent impeachment inquiry,” the court filing read.

Howell said in a memorandum released after the appeals court issued its decision that she denied the department’s request for a stay.