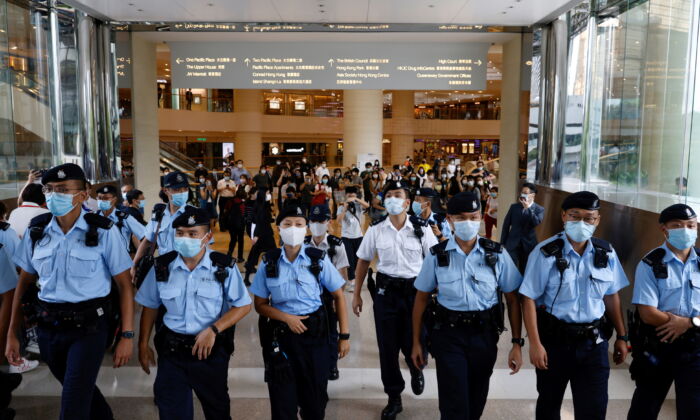 Police tell supporters to leave during the court hearing of Tong Ying-kit, the first person charged under a new national security law near the High Court, in Hong Kong, on July 30, 2021. (Tyrone Siu/Reuters)
China Human Rights

HONG KONG—Recent court judgements have freed Hong Kong authorities to use national security powers to deploy tough colonial-era laws in a clampdown against opposition groups, alarming activists and lawyers in the city.

Police have launched investigations into acts that took place before the national security law was imposed a year ago, despite assurances by Beijing and Hong Kong that the financial hub’s legislation would not be retroactive.

The recent probes have unnerved pro-democracy campaigners across the city, leaving some to fear they face prosecution for acts they believed to be legal at the time.

“The past is the future,” said Simon Young, a professor at the University of Hong Kong’s law school. “We are starting to see a fuller evolution of the national security law, and the way it allows the authorities to look at older laws and past events through a new lens.

“We can see it gives them new powers and confidence to use laws that were perhaps overlooked, or seen as previously unenforceable.”

Several groups, including veteran protest organiser Civil Human Rights Front, are under investigation for acts that pre-date the security law, according to statements by senior police and reports in pro-Beijing media.

Asked about statements from Police Commissioner Raymond Siu that the Front was being investigated over marches that predate the law, a force spokesman told Reuters last month that “police will continue to investigate if any organization and person have violated the … security law and other Hong Kong regulations”.

Some legal scholars and lawyers say the situation reveals the full sweep of the law—including its ability to effectively reboot laws from the British colonial era that touch on national security.

Two paragraphs in recent court judgements appear to clear the path for security probes into past actions, they warn.

And a District Court ruling in April noted that under the security law, the older offence of sedition was now classified as a more serious crime, potentially removing its previous statute of limitations of six months.

Beijing imposed the national security law on Hong Kong last year, seeking to punish what it sees as subversion, secession, terrorism, and collusion with foreign forces.

But fresh police investigations into acts that predate the law’s imposition appear to be triggering sometimes overlooked legislation on crimes such as sedition, a law governing private groups, and even legislation against espionage, criminal lawyers say.

Those powers include the right for national security police to conduct searches and electronic surveillance, such as phone tapping, without going to court or obtaining a warrant.

Asked about investigations into older offences and the impact of the court rulings, a police spokesperson said they would not comment on specific cases.

“In conducting any operation, the police will act on the basis of actual circumstances and according to the law,” the spokesperson said.

When the law was passed, senior Chinese and Hong Kong officials repeatedly stressed it would not be retroactively applied.

Hong Kong Chief Executive Carrie Lam told the UN Human Rights Council in June 2020 that the law was urgently needed to tackle a “gaping hole” in national security but the presumption of innocence would be maintained and the law would have no retrospective effect.

Lam also told the UN it would only affect “an extremely small minority” of Hong Kong.

Zhang Xiaoming, deputy director of the State Council’s Hong Kong and Macau Affairs Office, said on July 1 last year that “the law is not retroactive.” Security provisions in the older laws would be used “to punish crimes that have already been committed, which endanger national security,” he said.

The intensifying clampdown is forcing some prominent groups to disband, including the Civil Human Rights Front. Others are urgently shredding files, and deleting photos and online material, saying they fear even once-innocuous details could be used against them under Hong Kong’s evolving security regime.

“The recent past is an authoritarian goldmine,” said one private investigator who has been assisting some groups to protect themselves. “Essential rights and protections will count for little as the national security police build their cases by going backwards as well as forwards.”