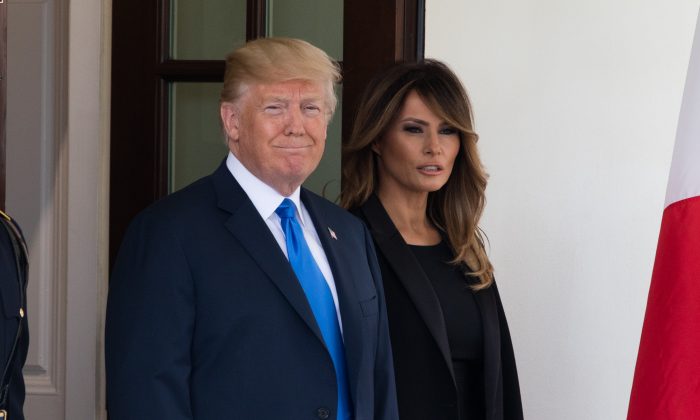 President Donald Trump and First Lady Melania Trump wait for the arrival of President of France Emmanuel Macron and his wife Brigitte Macron at the White House in Washington on April 23, 2018. (Samira Bouaou/The Epoch Times)
US News

Court Ruling Deals Minor Blow to Trump on DACA, but Opens Door to Victory on Appeal

A federal judge ruled Tuesday that President Donald Trump does not have the power to legally end the Deferred Action for Childhood Arrivals (DACA) program, insisting that protections for these young illegal immigrants must stay.

U.S. District Judge John Bates called the president’s decision to end DACA “arbitrary and capricious because the department failed adequately to explain its conclusion that the program was unlawful,” according to a memorandum opinion.

The judge’s decision appears to imply that Trump cannot undo executive orders issued by his predecessors, but Bates left an opening for Trump’s administration to appeal the decision by providing an adequate explanation for ending the DACA program.

“This is a huge victory for DOJ. By providing a modified justification, this can save the case on appeal,” Josh Blackman, a prominent constitutional-law professor at the South Texas College of Law in Houston, wrote on Twitter.

“I have long called on DHS to issue a revised memo w/ clearer justification for DACA recision. They haven’t done so for political reasons, or otherwise. Now J. Bates has given them a perfect opportunity to do so,” Blackman continued. “And it may actually moot other litigation based on the initial memo.”

This latest ruling is the third in recent months to block the Trump administration’s rollback of the program. Two other judges in California and New York had previously ruled it as illegal, even after a judge in Maryland ruled last month that Trump’s phaseout of the program was legal.

But both of those rulings have been appealed to circuit courts.

“Today’s (Tuesday) order doesn’t change the Department of Justice’s position on the facts: DACA was implemented unilaterally after Congress declined to extend benefits to this same group of illegal aliens,” Devin O’Malley, a spokesman for the department said in a statement. “The Justice Department will continue to vigorously defend this position.”

O’Malley also called the DACA injunction an “unlawful circumvention of Congress” that was vulnerable to the very challenges that ended the Deferred Action for Parents of Americans, also known as DAPA.

DACA was first created by Janet Napolitano who was then the Homeland Security Secretary in 2012 under the Obama administration. It was meant to work as a temporary measure designed to shield individuals brought to the United States as children by their illegal immigrant parents by giving them work permits.