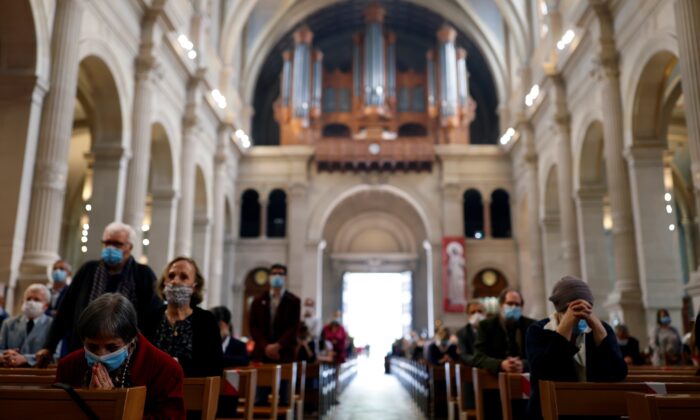 Worshipers attend a mass at Saint-Francois-Xavier church, as French churches reopen for religious gatherings after the government has reversed its ban, amid the coronavirus disease (COVID-19) outbreak, in Paris, on May 24, 2020. (Christian Hartmann/Reuters)
Europe

PARIS—France’s State Council, the country’s highest court, on Sunday ordered the government to review a law limiting the number of people in churches during religious services to 30.

The Council said in a statement that the measure was not proportionate to coronavirus infection risks.

Last week, the government announced that a nationwide lockdown in place since Oct. 30 would be unwound in phases.

Catholic organizations have challenged the limit, arguing that churches and cathedrals are much more spacious than retail outlets, where the limit is one person per eight square meters.

“The claimants are right in saying that the measure is disproportionate in light of protecting the public’s health … thus it is a serious and illegal infringement on the freedom of worship,” the council said.

The Conference of French Bishops welcomed the ruling and said that it would meet French Prime Minister Jean Castex later on Sunday to discuss new rules to limit the risk of coronavirus infection during church services.

“No other activity is limited by such a limitation regardless of surface area,” it said.

Catholic organizations are proposing to allow churches to utilize 30 percent of their seating capacity.

On the first Sunday after a month-long lockdown, French churches reopened for the first time with services for Advent, the fourth Sunday before Christmas.

At the Saint-Sulpice church in Paris, a sign at the entrance read “space limited to 30 people”, but there were no controls on how many people could enter and about 50 to 60 people, all wearing masks, took part in the service, seated on chairs spaced far apart.

“I am so happy to be back. It is sad to see such a big church so empty, but it is better than watching mass on television,” said Jean-Baptiste Jeulin, an engineer.

“Catholics, but no doubt also Protestants, Jews, and Muslims, perceive this measure as highly inconsiderate. It is a form of disdain,” he said.

By Gilles Guillaume and Antony Paone