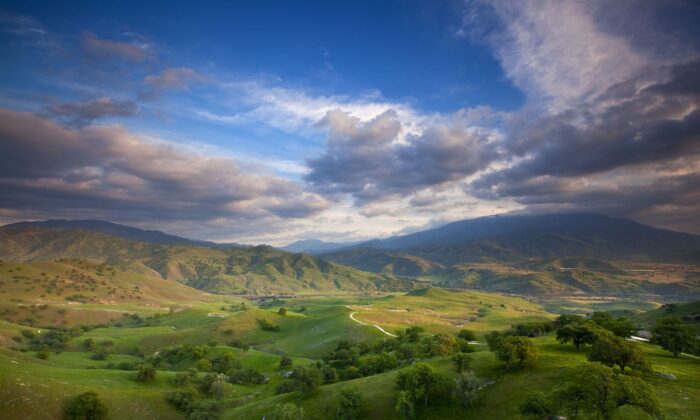 Scenic views of the rolling green hills and oak trees of the Tollhouse Ranch located in the heart of the Tehachapi corridor in California. (Courtesy of Ian Shive)
Southern California

NEWPORT BEACH, Calif.—Philanthropists Frank and Joan Randall recently continued their long-standing dedication to the conservation of California’s open space with a $50 million gift to The Nature Conservancy, which will allow for the acquisition and preservation of more than 72,000 acres in the Southern Sierra Nevada and Tehachapi Mountain ranges.

Located 100 miles north of downtown Los Angeles, the Frank and Joan Randall Preserve will mitigate habitat fragmentation for wildlife—from pollinators to large predators—and provide the ability to move more freely and safely throughout natural, intact habitat corridors and allay the impact of ever-increasing land development and human encroachment in the region.

“What is striking about the Randall Preserve and this area of the Tehachapi is its rugged beauty and unique topography,” said Mike Sweeney, Executive Director of The Nature Conservancy. “[The preserve] spans from very high elevations where you find snow, all the way down to the Mojave Desert and the Central Valley. It will ensure a much-needed corridor for wildlife, like endangered mountain lions to the south, so they can move, migrate and adapt.”

The area of the Tehachapi is considered a critically important conservation landscape area in a chain of protected and unprotected lands that run from the Sierra Nevada to the Baja Peninsula. The area enables the connectivity needed to improve genetic flow between populations of species that have become isolated or endangered by roadways.

To address roadway hazards, The Nature Conservancy is partnering with Caltrans to study and create a system of wildlife crossings under and over California Route 58 by retrofitting existing culverts and an overpass into more functional wildlife crossings. The study will also include planning for and installation of wildlife protection along the highway.

Located in the sweet spot where the Sierra Nevada, Mojave Desert, Central Valley, and Southern Coast converge, the preserve includes a sweeping scope of land across a broad range of elevations spanning from the Sequoia National Forest to conserved lands on the Tejon Ranch.

The preserve will effectively connect Northern and Southern California, allowing movement from Southern Sierra Nevada to Castaic, to the Transverse Ranges running east to west, and down to the Peninsular ranges, all known for strong biodiversity.

Mountain lions are one of the species that have been significantly compromised by urban expansion and human interaction in California. Officials hope that the Randall Preserve will enable these indigenous animals to move more freely across the region.

The California Department of Fish and Wildlife, tasked with ensuring mountain lion populations are able to live where suitable habitat and other environmental conditions allow, established a mountain lion conservation program in 2014.

With a decrease in the mountain lion population and an increase in isolation from their natural habitat due to the development of freeways, toll roads, and residential communities, the program was aimed at providing research and population monitoring to better understand the mountain lion’s connectivity and gene flow, human interactions, as well as mountain lion prey relations.

As a result of the program, mountain lions became legally classified as “specially protected species” in 2019 and are considered threatened under the California Endangered Species Act (CESA) within a proposed evolutionarily significant unit (ESU) located in Southern California and along the central coast of California, areas that are now part of the Randall Preserve.

The good news is that elsewhere in California, mountain lion numbers appear to be stable. In addition to mountain lions, The Nature Conservancy says that the protection of the immense area will ensure that 28 other sensitive species will have the best chance of survival. Some of the wildlife species that will benefit include condors, golden eagles, badgers, legless lizards, and slender salamanders. The preserve will also help protect blue oak trees, primrose sphinx moths, and several endangered plants.

South Pasadena native and long-time Newport Beach resident, Frank Randall, 91, began his career as a stockbroker and retired as a commercial real estate broker who had developed malls and other retail centers in the Los Angeles area. He and his wife Joan plan to leave a legacy of wildlife preservation through the acquisition of dwindling California open space.

“Preserving open space has long been a passion of ours,” said Frank Randall. “Once it’s gone, it’s gone. This area was under threat but, together with The Nature Conservancy, we’re doing everything we can to make sure this beautiful and ecologically diverse part of our state can stand the test of time for generations to come.”

The Randalls’ generous conservation efforts also include a $5 million donation in stock to the Banning Ranch Conservancy in support of the organization’s work to preserve a 384-acre oil field at the mouth of the Santa Ana River, adjacent to the cities of Huntington Beach, Costa Mesa, and Newport Beach in Orange County.

In 2021, the couple transferred an additional $45 million in stock shares to the Conservancy, in agreement with the Trust for Public Land, to secure an exclusive purchase agreement with the Banning Ranch owners to acquire what is Southern California’s largest piece of unprotected coastal open space between Ventura County and Mexico, vacant for more than half a century.

“Thanks to the Randalls’ generosity and the work by the Trust for Public Land, we are knocking on the door now, it’s very exciting,” Terry Welsh, M.D., President of Banning Ranch Conservancy told The Epoch Times. “There will never be another 400-acres for sale on the Southern California coast again. We could truly make history if all goes as planned from this point forward.”