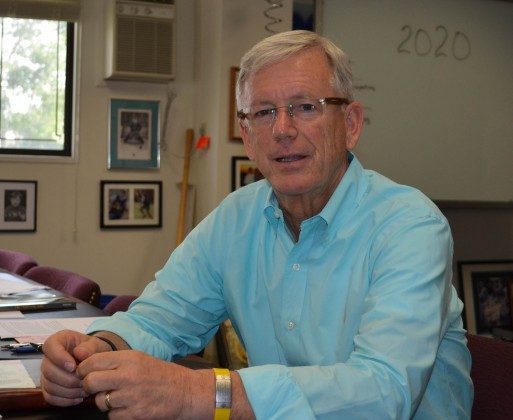 More than 200 firefighters, families and officials gathered at the New York State Fallen Firefighters Memorial at the Empire State Plaza in Albany on Oct. 6 to recognize firefighters whose names are being added. From Orange County, Capt. David Smith of the Howells Fire Company was honored. The memorial, dedicated in 1998, honors nearly 2,400 people who have died in the line of duty as professional or volunteer firefighters. The earliest name is from 1811.

Schumer said the new legislation makes the problem a federal crime and increases the penalty to eight years, reported the MidHudsonNews. Violators will be required to pay the municipality the cost of responding to the threat—police, SWAT teams, K-9s. “The legislation would also make it a crime to disguise your phone number and call the police,” Schumer said.

Governor Cuomo announced on Oct. 5 grants to two Orange County police departments for the purchase of electronic fingerprinting equipment. The Goshen Town police department received $8,998 and the Middletown police department received the maximum award of $10,000. This new equipment will replace existing devices that either malfunction or are obsolete. “Fingerprinting is a proven and highly effective crime-fighting method, which drives us to help law enforcement agencies record and share fingerprints as efficiently as possible,” Cuomo said. Digital fingerprint technology enables law enforcement agencies and the courts to instantly receive an arrestee’s positive identification and any past criminal history and warrant information from the state. This information is crucial in determining how cases against arrested individuals proceed, including whether bail is set by the court.

County Bridge Traffic and Revenue Up

The Bear Mountain Bridge saw the greatest increase in traffic, at 8.63 percent, and biggest revenue increase of 8.85 percent, of all five of the bridges operated by the New York State Bridge Authority, reported the MidHudsonNews. The Newburgh-Beacon Bridge saw a traffic increase of 0.48 percent and a revenue increase of 3.80 percent. The system-wide increases are a reflection of lower gas prices and increased summer driving.

Newburgh will spend over $12,000 to purchase a remote reservoir level monitoring system. The city’s drinking water comes from Washington Lake with a backup source at Brown’s Pond. The MidHudsonNews reported that the method for monitoring of the water levels is a little archaic. Assistant City Engineer Chad Wade told the city council that “we have a scribe line on each gate house and a person goes out every single day with a tape measure and measures down to the water level from the scribe line and he records the measurement and there are also alarm conditions on these monitoring devices so in the event we have a high water condition where the spillway and hopefully water doesn’t overtop the dam, we would be notified of the levels as they approach those elevations.” City Manager Michael Ciaravino told the council the new device would provide an early warning system in the event of a water main break or flood condition, but Councilman Cedric Brown challenged that. Despite his objections, the city council approved the purchase and the $1,000 per year fee by a five to two vote.

With little support in Chester and no approvals years after the county purchased the property, the development of the former Camp LaGuardia center for homeless New York City men remains in limbo. Mountco Construction and Development Corp. was contracted to develop the property, initially with 900 units and scaled back to 650 units of workforce and senior housing. “We requested a flexible zone, that is, a residential zone that can be changed to commercial if the demand was there. Over the years, I thought we were getting somewhere with the Town of Chester, but to date approvals have not happened or any real support,” Mountco President Joel Mounty said. The property has suffered vandalism both inside and outside, reported the MidHudsonNews.

The New York Department of Environmental Conservation has given the fast-growing Hasidic Jewish village of Kiryas Joel a permit for a major new water well. The permit issued last week gives the villlage its first approved water source for a 13.5-mile pipeline it has begun building to tap New York City’s Catskill Aqueduct. Orange County officials and property owners had voiced strong concerns about the village’s request to pump up to 612,00 gallons a day at the site because of its potential impact on Woodbury Creek and the overall groundwater supply. The permit will increase Kiryas Joel’s groundwater supply by about 30 percent once the well is developed and connected.

The CFO of Amy’s Kitchen Mark Rudolph explained to the Goshen Town Board on Oct. 1 that its new plant will be constructed on a property not connected with a spiritual society called Science of the Soul Study Centre, reported The Chronicle. A 73-acre lot known as the Ver Hage property will become the site of Amy’s Kitchen and the centre will be built on a 212-acre parcel, known as the Echo Lake site. Amy’s Kitchen also purchased the Strong Farm on Cheechunk Road in Goshen for more parking spaces. Amy’s Kitchen owners, Rachel and Andy Berliner, are members of the group. Amy’s Kitchen is planning to construct a bridge over the Wallkill River, saying it’s the best entry into both sites. Board members expressed concern over taking Science of the Soul property off the tax rolls, which will happen within five years of the building’s completion. Amy’s has secured a 15-year PILOT (Payment in Lieu of Taxes) program, which will begin in 2018, the year that Amy’s plans to open for business.

Hundreds of Cyclists Join ‘Ride with the Camels’ Fundraiser

More than 350 cyclists convened at Warwick Town Park on Sept. 20 for Orange County Bicycle Club’s annual Country Roads Fall Foliage Bicycle Tour. Also known as the “Ride with the Camels,” this popular charity bike tour raised nearly $23,000 for three not-for-profit community organizations in the county—Big Brothers Big Sisters of Orange County, Catholic Charities Community Services of Orange County, and The Sanctuary for Animals. “We couldn’t have asked for a more perfect day for this year’s Country Roads Tour,” said Susan Solis, Bike Tour committee chair and member of the Orange County Bicycle Club. Riders had the choice of 10, 24, 43, and 63-mile routes. Along the scenic routes, riders had access to rest stops staffed by Bike Club volunteers and stocked with beverages, home-baked treats and other refreshments, and restroom facilities.

Chief Master Sgt. Mark Cozzupoli, a veteran of deployments to Iraq and Afghanistan, on Oct. 3 assumed the position of top enlisted airman in the 10thth Airlift Wing at the Stewart Airport Air National Guard Base, reported the MidHudsonNews. Cozzupoli replaces Chief Master Sgt. Joseph Ruzzo, the outgoing command chief master sergeant. Cozzupoli enlisted in the Air Force in 1993 and served on active duty for four years before transferring to the New York Air National Guard and the 105th Airlift Wing in 1997.  He deployed five times including to Balad Air Base, Iraq in 2005 and Bagram Air Base, Afghanistan in 2011. The job requires attention to professional military education, enlisted promotions, mentorship, morale, family readiness, community relations, and esprit de corps for enlisted men on the base.

Heather Howley, the CEO of Independent Helicopters based at Stewart Airport briefed the Stewart Airport Commission on Sept. 29 on ways to grow airport traffic and revenue, reported the MidHudsonNews. “When people fly in or drive in, maybe it’s another excuse just to come to the airport,” Howley said.  “There are places for them to shop; maybe they are mom and pop shops, not necessarily big retail stores, restaurants and other things to do; maybe there is a nail salon. Just fun stuff for people to hang out at the airport as opposed to go to the airport just to fly away.” Howley started her helicopter business just seven years ago when she was 25 and with only $25. Three of her five helicopters are stationed at the airport.

Commercial flights at Stewart Airport for commercial flights has dropped by more than a third during the first eight months of the year, dropping from 309,357 people in 2014 to 191,109 as of Sept. 28, reported the MidHudsonNews, while cargo tonnage increased to 10,412 tons over the same period. Airport Economic Development Director Michael Torelli told the Stewart Airport Commission on Sept. 29: “In July and August you always get a little uptick and in September you get a little downtick and then it remains flat or slightly increasing through the end of the year,” Torelli said.  More cargo traffic is expected during the coming holiday season as well as the recent addition of Caribe South Airways which is expected to start up soon. Caribe ships fresh fruits and vegetables from the Caribbean.

A private boarding school once attended by Donald Trump, Stephen Sondheim, and John Gotti has been sold at auction for $15.8 million to a Chinese real estate company. The winning bidder at the Sept. 30 auction of the New York Military Academy was the Research Center on Natural Conservation, a non-profit center formed by the chairman of Chinese real estate company SouFun Holdings in 2011 to buy a gilded age mansion called the Arden House from the Open Space Institute for $6.5 million. SouFun also bought the AIG building on Wall Street in 2011. The buyer of the 113-acre academy property in Cornwall-on-Hudson isn’t required to maintain a school on the land. Anthony Desa, chairman of the academy’s board of trustees, said the buyer will continue the school.