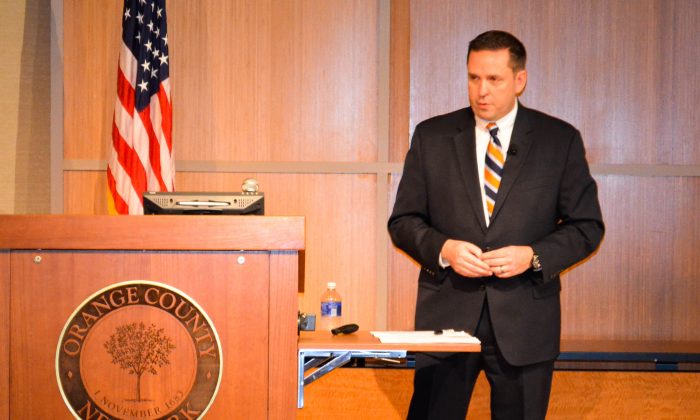 The address highlighted several accomplishments in the past year as well as new policy initiatives. “I am very glad to report that the state of Orange County is stronger than ever and our future looks bright,” Neuhaus said.

The county reduced spending by $40 million without layoffs. The fund balance, the county’s rainy day fund, is starting to grow. The unemployment rate has dropped from 6.4 percent to 4.5 percent. Sales tax revenues have gone up for the second year in a row.

Economic development centered on commercial development of the closed Camp La Guardia and the Indigot watershed.

The 1000+ acre county-owned Indigot watershed was earmarked for a future reservoir several decades ago.

A memorandum of understanding was signed on stage to applause that provides for Middletown’s pipes and treatment facilities to be used to make water available for economic development along the 17M corridor.

Camp La Guardia has been closed down. “It was a good thing that Camp La Guardia closed,” Neuhas said. “It changed the Heritage Trail. Try letting your wives and kids go there when you had the issues going on there back then.”

He said the county purchased development rights and proposals are coming forward to change zoning in Blooming Grove and Chester from agricultural and residential to commercial.

We are in high gear on bridges.
— County Executive Steven Neuhaus on maintaining bridge infrastructure

“We foresee a commercial cul-de-sac with a number of parcels shovel-ready that we can develop. This is the beginning of a new life for Camp La Guardia. It’s back on the tax roll, by the way.”

The county fixed five bridges and there are plans to fix six more. “We plan on fixing six more by the time we are done next year. We are in high gear on bridges,” Neuhaus said.

The county exec said the county jail is a step above others in the country with several key accreditations. “This is the prestigious triple crown. When you have these accreditations, you are showing the country and your peers that you know how to run a sheriff’s office,” Neuhaus said.

Neuhaus also talked about rolling back urban blight. He showed a photo of a well-maintained building next to a deteriorating one. “Imagine if you lived here and this was your neighbor.”

He has directed the county attorney to update with the health department a new code in the public health law that would allow the county to partner with local municipalities to curb urban blight. He intends to partner with building and fire code inspectors in the cities to enforce violations of the updated health code law. He said blight “should not be happening in Orange County.”

County legislator Tom Fagione strongly supported the county exec’s initiatives. “The county is getting stronger day by day.” He hoped that his district will benefit from improvements.

Deerpark Supervisor Gary Spears said, “It looks like we are moving forward in all areas. Some good fiscal conservatism and good growth, also. I think we have the best of both worlds.”

Spending is down, the economy is robust, and our budget is on the right track.
— L. Steven Brescia, chair, Orange County Legislature

Chair of the County Legislature L. Steven Brescia, reiterated the positive note stated by Neuhaus. “Orange County is moving forward in a positive way. Spending is down, the economy is robust, and our budget is on the right track.

“These are signs of a well-run government. The proposed resolutions to Camp La Guardia, the Indigot properties, and using the health code to deal with nuisance properties are responsible solutions to long-standing problems,” Brescia said.