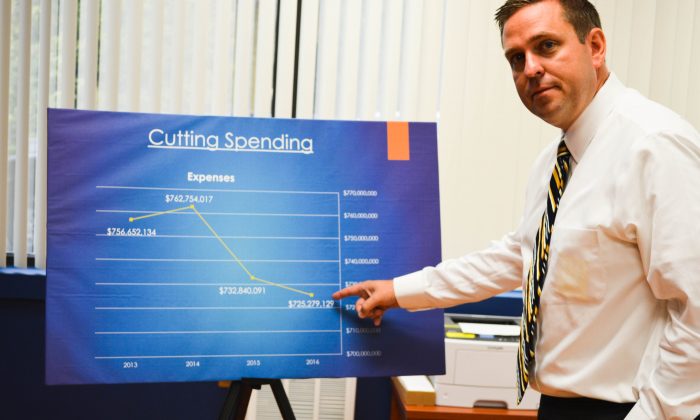 GOSHEN—The proposed budget that County Executive Steven Neuhaus presented to the Orange County Legislature on Sept. 30 had a distinct narrative. With continued cuts in spending, a lowering of the deficit, an increase in tax revenues, and an increase in employment, this budget suggests county finances are turning the corner.

In an interview in his office, Neuhaus explained that when he became County Executive in 2014, the county’s financial situation was poor “and the options were all bad.” The county could drastically raise property taxes, lay off hundreds of county workers, or take sales taxes from local coffers.

He opted for offering county workers an early retirement, which was accepted by 300 employees. That step cut $30 million.

This year the county took the retirement option to a new level.

If an employee has an opportunity in the private sector, even if he is not eligible for retirement, the county will pay to let me him or her leave. Neuhaus said 60 county workers have taken the option, saving the county $6 million.

Employment is coming back with gains in the healthcare, manufacturing, and agricultural industries.

The county renegotiated existing vendor contracts, a five to ten percent reduction, and union contracts that had expired. This gives a clearer picture of labor costs. New employees must now contribute to their healthcare costs, just as management and elected officials do.

Altogether, the budget shows a $7.5 million cut in spending.

Neuhaus said the county’s biggest headache—the deficit—is now down to $20 million. According to Neil Blair, the county budget director, in August 2014, in planning for the 2015 budget, the deficit stood at $60 million. The deficit in 2015 was covered by the county drawing down its surplus, as will the projected budget for 2016.

Since the Great Recession of ’08, two factors have indicated a positive financial turnaround—the tax base and employment. Both are now starting to trend upward.

Neuhaus said after 2008 the county saw the tax base fall 25 percent, but since 2014, sales taxes revenue is up by two percent.

The county lost 10,000 jobs in the recession. Neuhaus said that employment is coming back with gains in the healthcare, manufacturing, and agricultural industries. Unemployment was 6 percent and is now 4.6.

He said Amy’s Kitchen alone will bring 600 jobs to the county. UNFI, a distributor for Whole Foods, is expected to hire 400; Coach USA bus lines is hiring around 350. Neuhaus pointed to other developments that could bring jobs and revenue to the county.

The New York Air Show at Stewart might evolve as more than a popular event. Neuhaus has discussed with the Port Authority the possibility of adding an event for the aviation industry, much like the Paris Air Show. Aviation bigwigs—Boeing, Airbus—would see the latest in aviation and make deals.

The revamped Orange County tourism website now gets 20,000 hits a month and has directly booked 1100 people into local accommodations since June. The tourism funding increase will come from the increases generated from hotel tax revenue.

Another revenue source is expected to be the casino coming to Sullivan County. The casino is required to pay Sullivan, the state, and neighboring counties a fee. “When they come online they will be contributing millions per state law to the county coffers in a check directly to us.”

A burr under the county’s skin has been the 10-year wrangling over what to do with the 350-bed Valley View nursing facility. The constant battling is not good for Valley View’s employees who worry about job security or prospective residents. People would hesitate to settle a relative there if the future is uncertain.

“I want to take [Valley View] off the table,” Neuhaus said. “That will at least give a level of calm and security to their jobs and to people whose loved ones are there.”

Neuhaus proposed to keep the facility and make the adjoining 62 acres a community campus of healthcare. He said the private sector “is salivating” over the possibility of building a health care facility there. That facility could, for example, include cardiac care and independent/assisted living apartments.

Valley View residents would have immediate access to cardiac care and would draw people from the community. The apartments would allow a spouse close contact with a love one who needed to be at Valley View.

“This would be an all-inclusive senior community with the amenities of a healthcare facility on board,” Neuhaus said. It is projected to bring in millions in revenue to the county.

The county has other properties in Hamptonberg, Wallkill, Newburgh, and Goshen that Neuhaus would like to see have a better use. The properties could realize around $3 million if sold or repurposed, he said.

The county will invest in an upgraded radio communication system from the federal government. He says he reduced the state’s $24 million price tag to about $13 million. It will eliminate dead zones and improve communication among the different agencies. The county will subsidize it for the local communities. The overall cost of the upgrade will be $20 to $25 million for a new public radio infrastructure for agencies with mobile portable radios.

Social Services is always the biggest expense in the budget. The county will reallocate funding within its budget and add extra dollars in three units—the rape crisis center, safe homes, and the program to alleviate hunger for food insecure children.

The county reports about 250 sexual assaults a year, yet the rape crisis group is severely underfunded, having lost $85,000 in state funding. Rape crisis staff treats victims at the hospital, and helps emergency responders and law enforcement in dealing with victims of sexual assault.

The county will close the gap left by state deletion. The county will allocate more resources to support safe homes that protect victims of domestic violence.

Neuhaus has taken a personal interest in the Orange Cares program that provides weekend food backpacks for students in need. “I want to see this be a success.”

In an email, Legislative Minority Leader Christopher Eachus wrote that there is another way to look at the county’s financial situation. “We also made many other recommendations, such as combining departments to reduce administration (Mental Health & DSS and IT & General Services) and recommended the complete dissipation of some unnecessary departments which did not happen.”

He says county administrators and workers got pay raises with no cut in services. “We, the legislature, requested taking over more control of pay especially for administrators but were denied this capability.”

Eachus points to the need to reduce some of the 250 administrative positions “by combining and reducing the number of departments in the county and by finding new revenue streams which are available to us.”

During his short term in office, Neuhaus says he’s learned two things when dealing with the budget—present a lot of options and be open-minded. “Last year we got off to a rocky start. It was baptism by fire.”

The county exec’s short term goals are to use less of the surplus to balance the budget, to continue to see sales tax revenues go up, and the see the tax base grow.

I think our future looks bright, and we are getting back on track where we need to be.
— Kevin W. Hines, Republican legislator

In the long term, Neuhaus hopes the government center can be completed in less than four years, and he wants to see Valley View as “a nice community campus mixing senior housing and the private sector.”

Neuhaus says the relationship with the legislature has improved. Now he and most legislators are “heading in the same direction.” He said it’s all about working together. “Compromise runs government.”

Chairman of the Legislature Steven Brescia said he was very pleased with the presentation, and he is looking forward to the budget sessions in October.

Jeffery Berkman, Democrat from Middletown, was pleased to see plans in the budget for extending the Heritage Trail to Middletown, noting that promises about the trail’s extension have been made in the past.

Republican Mike Anagnostakis was particularly pleased at the plans for saving Valley View.

Republican Kevin W. Hines summed up his reaction to the proposal:  “I think our future looks bright, and we are getting back on track where we need to be.”