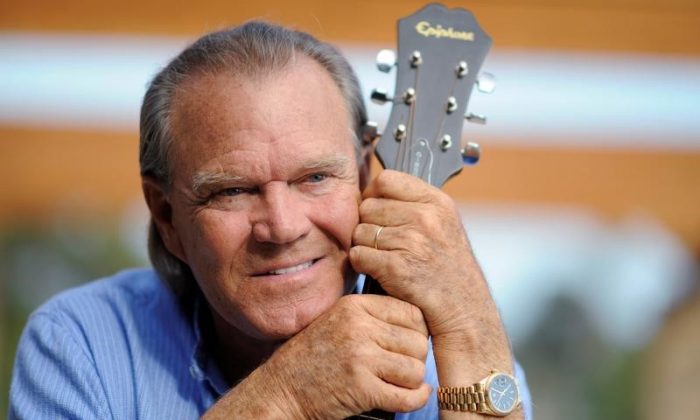 Singer-guitarist Glen Campbell, the “Rhinestone Cowboy” who went on a farewell tour to play hits such as “Wichita Lineman” and “Gentle on My Mind” before Alzheimer’s disease robbed him of talents, died on Tuesday at the age of 81.

Campbell died in Nashville at an Alzheimer’s facility surrounded by his family, his publicist Sanford Brokaw said.

“It is with the heaviest of hearts that we announce the passing of our beloved husband, father, grandfather, and legendary singer and guitarist, Glen Travis Campbell, at the age of 81, following his long and courageous battle with Alzheimer’s disease,” his family said in a statement posted on the singer’s official website.

Campbell announced in June 2011 that he was suffering from Alzheimer’s. The “Gentle on My Mind” singer then embarked on a nationwide farewell tour that ended in November 2012.

Campbell began his career as a well-regarded recording session guitarist in Los Angeles before becoming a fixture on the U.S. music charts, radio and television in the 1960s and ’70s. He won six Grammy Awards and had nine No. 1 songs in a career of more than 50 years.

He released a final studio album in June 2017, called “Adios,” that was recorded after the tour wrapped up.

The tour was captured in a documentary aired in 2015 by CNN, “Glen Campbell: I’ll Be Me,” that movingly captured him struggling with the disease. His song “I’m Not Going to Miss You” from the movie’s soundtrack won a Grammy Award for best country song.

His death on Tuesday brought tributes from country music stars.

Singer Brad Paisley thanked Campbell on Twitter “for the artistry, grace & class you brought to country music. You were a shining light in so many ways.”

Dolly Parton released a short tribute video and tweeted that he “was one of the greatest voices of all time. I will always love you, Glen!”

On his last tour, Campbell had three of his eight children playing in his backup band and providing emotional support. He clearly had memory problems on the tour, even forgetting in an interview that he suffered from Alzheimer’s. While he sometimes stumbled over lyrics or had trouble with his guitar work, critics said he still showed flashes of brilliance.

“His fingers are still able to float over his guitar neck with a fluid ease and his voice can hit notes that lesser vocalists … can barely brush against,” a Los Angeles Times critic said of a June 2012 performance.

In 2010 Campbell began having occasional trouble recalling lyrics or guitar licks. He was formally diagnosed with Alzheimer’s that year at age 75 and revealed it in a People magazine interview in July 2011.

“Glen is still an awesome guitar player and singer,” his wife, Kim Woollen, told People. “But if he flubs a lyric or gets confused onstage, I wouldn’t want people to think, ‘What’s the matter with him? Is he drunk?'”

Campbell was one of 12 children of two sharecroppers in southwestern Arkansas. He immediately took to the cheap guitar his father bought him and played in his uncle’s band. After a teenage marriage and divorce, he married again and headed to Los Angeles in the late 1950s.

There Campbell became part of the “Wrecking Crew,” a group of highly sought-after session players who recorded with Elvis Presley, Frank Sinatra, Dean Martin, the Monkees and Nat King Cole. Campbell also became a touring member of the Beach Boys, filling in for Brian Wilson, who did not like to go on the road.

When he set out on his own, Campbell had a breakthrough hit with “Gentle on My Mind” in 1967, quickly followed by the break-up song “By the Time I Get to Phoenix” and “Wichita Lineman,” a song about loneliness that Campbell said was his favorite and one of his many collaborations with songwriter Jimmy Webb.

Recordings of “Phoenix” and “Gentle on My Mind” earned Campbell five Grammy Awards and the boy from tiny Delight, Arkansas, became a much-sought superstar.

He starred opposite John Wayne in the 1969 film “True Grit” and earned an Oscar nomination for singing the movie’s theme song.

That same year he began a three-year run on television with “The Glen Campbell Goodtime Hour” variety show. He opened each show with a wall-to-wall grin and proclaimed in a down-home twang, “Hi, I’m Glen Campbell!”

Campbell‘s stardom led to excess and personal troubles. Starting in 1980, he had a tumultuous relationship with country singer Tanya Tucker. They recorded duets and toured together and planned to marry but their 14-month affair ended after physical fights and cocaine use.

Campbell‘s third marriage to Sarah Davis, former wife of country singer Mac Davis, also was marred by drug abuse and drinking but he eventually sobered up with fourth wife, Woollen.

Campbell relapsed in 2003 and served 10 days in jail for drunken driving in Arizona – a case that produced an embarrassing mugshot of a scowling, disheveled Campbell that went viral on the Internet.

After his success began to ebb in the 1990s, Campbell concentrated on performing at his theater in the country music resort town of Branson, Missouri, and spent more time pursuing his passion for golf.