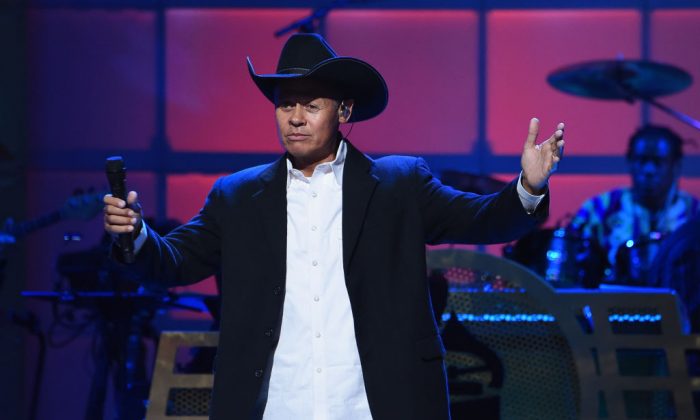 A country music singer has taken aim at the NFL’s national anthem protests by releasing a new song addressing the topic that has been shared thousands of times on social media.

The new single by Neal McCoy is titled “Take a Knee, My A** (I Won’t Take a Knee).” He debuted the song Nov. 8 in a Facebook Live video during a concert that has garnered over 4 million views and over 111,000 shares as of writing.

The new song is a response to the recent NFL protests where players have knelt during the national anthem to protest perceived police brutality and racial inequality.

Former San Francisco 49ers quarterback Colin Kaepernick started the controversy last year by first sitting then kneeling during the national anthem. He told NFL.com last year he’s “not going to stand up to show pride in a flag for a country that oppresses black people and people of color,”

Many critics have said that protesting during the anthem is disrespectful to the country, especially to members of the military. Some have also said that NFL games are neither the venue nor the time to protest, as football has generally, until recently, been a place where the public can put aside their political views.

“I’ve been on 15 USO tours,” McCoy said, according to NBC4i. “I’ve entertained our troops in Pakistan, Afghanistan, Iraq and all over the world. So, no, this is not a money grab. This is a guy that believes in our country, that does not like people kneeling, not standing with their hands over their hearts, for the Pledge of Allegiance and the National Anthem. That’s what I’m about.”

McCoy said that the song was written by a friend of his and that the military is the main reason he proudly stands for the national anthem.

In a show of dedication to his country, McCoy has filmed himself reciting the Pledge of Allegiance on social media for 681 days in a row as of Nov. 18, according to NBC4i.

Recently, the country star also blasted GQ over naming Kaepernick its “Citizen of the Year.”

“I understand they’re probably going to say he’s done a lot for civil rights and everything, and maybe he has,” McCoy said in a Tuesday, Nov. 14 video posted on Facebook.

“Maybe whatever he was trying to do, with civil unrest, maybe African Americans being treated wrong, or not equally, and some of that’s right. Maybe that’s what he was trying to do. But, taking a knee during the national anthem at a professional NFL game is not the way to do it” he added.