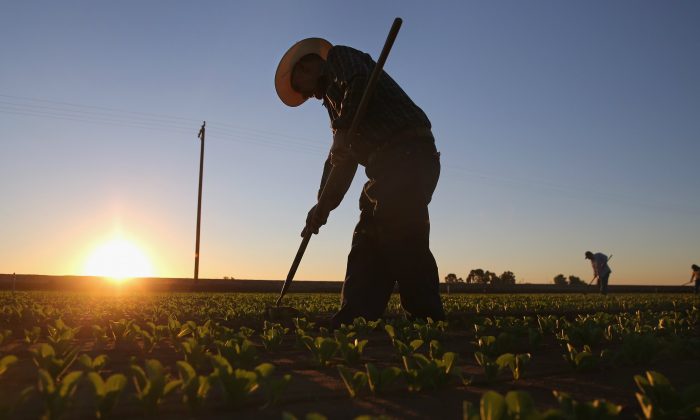 The 307-page report chronicles the trafficking process, beginning with the victims’ recruitment in their home country to work in the United States, their migration, their experiences of exploitation and victimization, their escape and receipt of services, and their efforts to seek justice through civil or criminal cases. The report states that it is the first study to measure the use of force, fraud, and coercion throughout the entire process from recruitment to escape.

Not all labor trafficking occurs in isolated surroundings. Often it exists right before the public’s eyes. Survivors generally have to escape on their own, rarely getting help from law enforcement or the Department of Labor.

“This study provides a lot of evidence on how to identify these victims,” said John Picarelli, director of the Crime, Violence, and Victimization Research Division at the National Institute of Justice, in the U.S. Department of Justice. The two and half year study was funded by NIJ.

A caveat: with their methodology, statistics reported are not nationally representative. The findings apply only to their study participants. The sample data of this report came from service providers that only minister to immigrants, who were not U.S. citizens. But U.S. citizens are labor trafficked too.

Despite its limitations, the results are highly suggestive and provocative.

“Contrary to popular belief, a majority, 71 percent, in fact, of the survivors that we studied, came to the United States with lawful visas,” said, Amy Farrell, associate professor at the School of Criminology and Criminal Justice at Northeastern University and co-author of the report.

However, by the time the victims escaped and sought services, 69 percent were unauthorized, most as a result of their being trafficked. “As a consequence of being unauthorized, some labor trafficking victims were placed in deportation proceedings, threatened by immigration officials, and/or arrested and placed in detention centers,” states the report.

Victims were mostly recruited in their home countries for work in the United States. The recruitment meetings “almost always begin with a misrepresentation of the job, immigration benefits, living conditions, and pay being offered,” states the report.

A surprise finding in the sample was that the victims paid on average $6,150 in recruitment fees for jobs in the United States. This figure is greater than the annual per capita income of the top six home countries of victims in the sample. “Victims often borrowed money, used their homes or those of family members as collateral, or sold property outright to pay these fees,” states the report.

Another surprising finding was that about one-third of the victims had some college or higher education.

None of the victims were aware that what they experienced was labor trafficking, and may not know it was a crime. They didn’t know they had rights under U.S. law even with an expired visa.

Labor trafficking is defined as the use of force, fraud and coercion to compel labor, which all victims in the sample experienced. The examples cited included seizing travel documents to prevent laborers from leaving, threatening deportation if they complain, calling or threatening to call law enforcement or immigration authorities, isolating them, heavy surveillance, sexual abuse and rape, and violence and threats against victims and their family members.

Also, deception was common. For example, traffickers would claim they know powerful people who could harm them, or that victims were close to obtaining permanent residency status which would be lost if they didn’t continue.

“Traffickers commonly carried firearms. In some cases, workers were beaten in front of the rest of the staff,” states the report.

Physical abuse and violence could not be inflicted on laborers who work at jobs that require interacting with the public. The report states that instead, traffickers used tactics to demean and demoralize 82 percent of the sample victims with “incessant verbal jabs,” to attack their self-worth. These are the cases where the victim is essentially “hidden in plain sight,” from which the title of the 15-page supplementary report, “Hidden in Plain Sight, derived its title.

Florrie Burke, founder of the Freedom Network and an expert witness on cases of human trafficking, said, “We’re seeing a range from an enormous amount of psychological coercion and psychological control that don’t leave physical marks, but they are insidious at breaking down someone’s the will and eroding someone’s self-confidence, …so it’s harder for people to leave.”

Burke said that when the public doesn’t see the visible signs, people say ‘Well, this must not be trafficking.’

Bystanders can witness instances of extreme degradation and not report it. Colleen Owens, research associate at the Urban Institute and co-principal investigator of the report, provided a story from the victims’ accounts, when neighbors saw a domestic servant out at 4 a.m., cutting the lawn with a scissors. She showed them scars which she had that came from abuse. But the neighbors chose not to report this to authorities, Owens said.

“Most victims escaped from labor slavery by running away,” states the report, which shows that they didn’t get help from the outside.

Nearly half of the perpetrators were arrested. The disappointing arrest rate is due in part to various fears of the victims, such as being deported and retribution from their exploiters.

Another factor is the inability or unwillingness of local and federal law enforcement agencies to distinguish labor trafficking from other forms of labor exploitation and workplace violations. The Department of Labor investigates violations regarding work and compensation, such as hours worked, overtime pay, and child labor.

The report states, “The biggest reason that so many labor trafficking crimes occur without intervention” is because of the failure of law enforcement to make the distinction between labor exploitation and labor trafficking.

The report quotes an attorney with experience prosecuting labor trafficking cases, “It’s always borderline.” It’s difficult to prove labor trafficking in a court of law. Another attorney said that police decline to see a victim unless there is clear evidence of physical abuse or an incarceration.

A victim is entitled to make a “Continued Presence” request, which is a temporary immigration status for individuals identified by law enforcement as victims of human trafficking and who are potential witnesses in the investigation or prosecution of the trafficker. Unfortunately, “obtaining Continue Presence for labor trafficking survivors was extremely rare across the sites,” states the report.

How Many Are There?

Picarelli said that research on the prevalence of labor trafficking, that is, scientific studies that provide accurate counts, are lacking. One exception that he cited is a study at San Diego State University that found that 38,458 undocumented Spanish-speaking persons had experienced an incident of human trafficking, and these persons constitute 31 percent of the undocumented Spanish-speaking workers in the county.

If the study were expanded to the whole of the United States, it would be a very large number. Moreover, the number from the San Diego County study only applies to undocumented immigrants, and so it is likely a conservative estimate, he said.

However, prevalence studies don’t tell us “who are these victims, what is happening to them and how did they show up here?” Picarelli said. This Urban Institute report is the first study on labor trafficking to gather data on the experiences of the individuals throughout the various stages of their victimization.