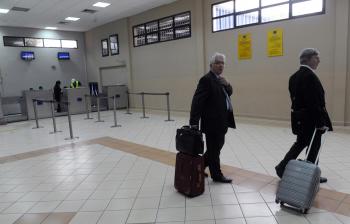 Rabat airport on May 11, 2010 is almost deserted. Eight airports on Morocco's north and west coasts, including Rabat and Casablanca, were shut down, the first time the cloud of ash that has caused air traffic chaos in Europe over the past month has affected north Africa's airspace. (Abdelhak Senna/AFP/Getty Images)
International

Counting Losses After the Volcano Ash

By Peter Sedik
Print
Now that the volcanic ash cloud from Eyjafjallajokull has settled, travel companies across Europe are licking their wounds and counting their losses. After cancellations of thousands of flights, some airlines lost large parts of their profits, but hope to be partially compensated by government and EU funds.

The volcano, located in Iceland under its namesake Eyjafjallajokull glacier, started erupting ash last month; the ash clouds drifted across part of Europe and lead to major air traffic disruptions. Overall, about 8 million passengers were affected by the flight cancellations so far.

A new but milder ash cloud is currently moving toward southeast France. Several airports were closed in Spain and North Africa on Tuesday. Meteorologists are not yet able to predict when the ash will disappear for good.