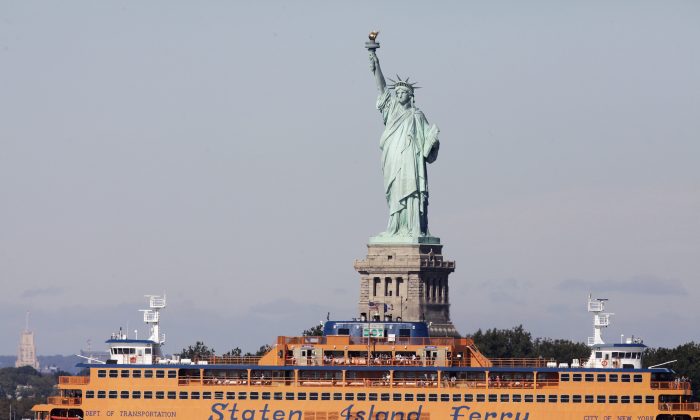 The new law, if approved by Mayor Michael Bloomberg, would mandate ferries to operate at intervals of 30 minutes or less. The changes would take effect within six months after the mayor’s signature.

The ferry currently operates every 15 minutes during rush hour and scales back to hourly service at nighttime. On weekends and holidays, the hourly service begins in the evening and lasts into early morning. The schedule was codified by the City Council in 2005.

Advocates for changing the schedule, including Republican mayoral candidate Joe Lhota, argued that Staten Islanders have only one other mass transit option during nighttime. According to testimonies filed with the City Council, the current nighttime, weekend, and holiday service is detrimental to businesses, residents, and tourism.

The city’s Department of Transportation (DOT) opposed the schedule change, citing lack of nighttime ridership and lack of funds.

The Staten Island Ferry is one of the busiest ferry routes in the world, carrying some 70,000 riders on an average weekday. Last year the ferries carried a total of 22 million people, an increase of over 700,000 from 2011, according to the “Mayor’s Management Report.”

Meanwhile Staten Island’s population is growing faster than any other borough, according to the New York City Economic Development Corporation.

The ferry has operated on a round the clock schedule every day of the year for over a century. It is considered one of the most reliable forms of mass transit with a 96 percent on-time performance record.

The DOT opposed the schedule change.

Kate Slevin, the assistant commissioner of intergovernmental affairs for the DOT, testified at a transportation committee hearing in June that the total overnight ridership on the ferry makes up only 3 percent of the daily average.

On some nights, Slevin said, the number of ferry riders ranges from single digits to a few dozen passengers. The ferry’s smallest Austen Class boats are built to carry more than 1,100 riders.

Even if ridership doubles given the new schedule, the nighttime cost per rider would increase to nearly $20, with no additional revenue stream.

“This cost comes at a time of decreasing federal and state funding for transportation, exacerbating an already difficult situation,” Slevin said. “That being said, if demand for ferry service begins to exceed the current service schedule, whether overnight or during any other time of day, DOT would explore ways to make additional service financially and operationally possible.”

Schedules for buses and the Staten Island Railway (SIR) are designed to meet ferries as they arrive at terminals on either side. Slevin pointed out that if neither the Metropolitan Transportation Authority (MTA) that manages the buses or the SIR change their schedules, passengers on the additional boats will be left without transit links.

The Staten Island Ferry Riders Committee collected nearly 1,600 signatures in support of the bill. Nicholas Zvegintzov, the committee chair, said that the nighttime hourly schedules make the ferry “a miserable transit service linking the island to the rest of the city.”

“A one-boat once-per-hour ferry soon turns into a zero-boat many-hours-to-wait ferry if there is any problem on the boat or in the harbor,” Zvegintzov testified in June. “Last Saturday, for example, more than a thousand travelers waited up to two hours for delayed and cancelled ferries.”