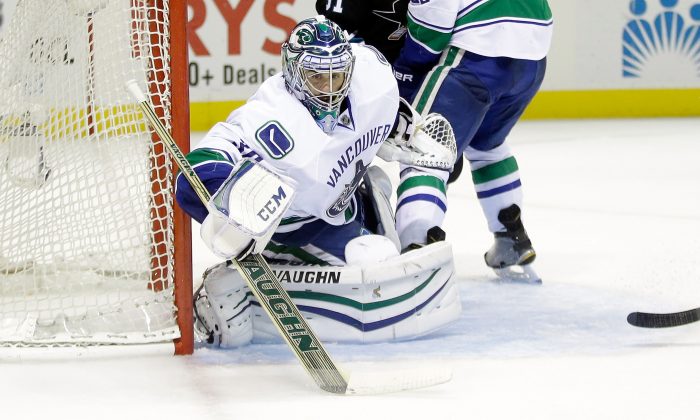 Ryan Miller of the Vancouver Canucks makes a save during their game against the San Jose Sharks at SAP Center on Nov. 6, 2014 in San Jose. The Canucks no longer have questions about their goaltending. (Ezra Shaw/Getty Images)
Canadian Content

Could This Be the Year a Canadian Team Wins the Stanley Cup?

First step is to reach the playoffs
By Rahul Vaidyanath

Perhaps 2015 will see a Canadian team lift the Stanley Cup for the first time since 1993.

Yes, the season isn’t even a quarter of the way done, but Canadian hockey fans have some cause for optimism.

Six of seven Canadian teams (excluding the Edmonton Oilers) are all off to good or even great starts.

In the period since the lockout of 2004-05, other than the lockout-shortened season of 2012-13 and the first season after the lockout (2005-06), less than four Canadian teams made the playoffs every year. And last year, only the Montreal Canadiens earned a chance to fight for the Stanley Cup.

Given the new format for determining playoff teams introduced last season after the realignment, five Canadian teams would make the playoffs if the season were to have ended Monday.

And six Canadian teams are on pace to finish with more points than the average points needed to make the playoffs since the lockout (92 in the Eastern Conference and 94 in the Western Conference).

The six teams are also on pace to surpass their average point totals over the last eight full seasons since the lockout.

Granted that doesn’t mean too much given how young the season is and how much hockey still needs to be played.

What is undeniable though, is Canadian teams in aggregate, with the exception of the Edmonton Oilers, are doing well so far this season.

One way to determine which teams are overachieving is to compare how many points a team is on pace for against their average point total. By this measure the Canadiens are, by a noticeable margin, the biggest overachievers so far among the Canadian teams.

But Montreal is pretty much a perennial playoff team having only missed the postseason twice since the lockout. The Canadiens have been making the most of the few goals they score. When they lose, it hasn’t been pretty.

The Calgary Flames, on the other hand, have missed the playoffs five straight years and are on pace for 96 points. They have to be considered one of the most improved Canadian teams thanks to the stellar goaltending of Jonas Hiller and dramatically improved offense.

The Winnipeg Jets are on pace for 98 points and are aiming to make the playoffs for the first time since the Atlanta Thrashers did in 2006-07. In their second season in the Western Conference, the Jets have received improved goaltending from Ondrej Pavelec and have one of the best penalty-killing units in the NHL.

Goaltending is no longer an issue for the Vancouver Canucks with veteran American Ryan Miller between the pipes. This year so far, Miller has his best goals against average in five years and is facing fewer shots per game. The Canucks are the other quasi-perennial Canadian playoff team and are on pace for 113 points.

Since the couple of seasons following the lockout, the Ottawa Senators have been hit-and-miss with making the playoffs. This season, goalie Craig Anderson is back in excellent form. The tandem with Robin Lehner is working well and the Senators have the second best save percentage in the NHL.

Toronto is also off to a good start on offense and Phil Kessel is leading the way as usual, but the Leafs are getting more of a contribution from David Clarkson finally. Goaltending isn’t stellar, but it is on pace to be better than in recent years.

The last Canadian team to win the Stanley Cup is Montreal who did it in 1993. Since the lockout, the closest Canada has come to having another Stanley Cup champion is having a Canadian team reach the final, which happened three times (Vancouver 2011, Ottawa 2007, Edmonton 2006).

Of course, when it comes down to late March and early April and the battle for a playoff spot, teams won’t be thinking too much about what they did in October and November. But at least at this stage six of seven Canadian teams are setting themselves up to be in the conversation later in the season.

The key is to qualify for the playoffs. From there, anything can happen.

It nearly did for the Oilers in 2006, the only year they’ve made the playoffs since the lockout. As a No. 8 seed, they lost the Stanley Cup final in Game 7. Vancouver Canucks did the same in 2011, though as Presidents’ Trophy winner.