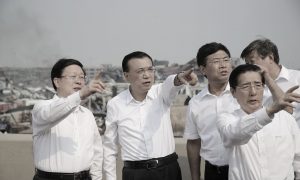 Workers in decontamination suits cleaning up the site of the explosions in Tianjin, China on Aug. 20, 2015. (STR/AFP/Getty Images)
China

Could Chinese Officials Be Right About the Dead Fish in Tianjin?

The thousands of dead fish found on the riverbanks in Tianjin were killed by a common summer phenomenon, and not because the waters were contaminated by the toxic chemicals stored in a warehouse that recently exploded in a deadly fireball, says a Chinese official.

The official may very well be telling the truth—the Chinese authorities are famous for hushing up disasters—and that is the scary part.

On Aug. 12, a warehouse in the northern Chinese port city of Tianjin that held about 2,500 tons of hazardous chemicals exploded, killing over 100 people and injuring hundreds. Tianjin residents are increasingly angered by the Chinese authorities’ listless emergency response efforts, failure to provide sufficient information, and censorship efforts.

About a week after the blast, Chinese officials say that the toxic fallout, while severe in the blast site, is nonexistent in the adjacent areas. Chinese citizens are suspicious of the claims, and point to stinging rain and the masses of dead fish in Haihe River found on Aug. 19 as proof of widespread toxic contamination.

Deng Xiaowen, the head of Tianjin Environmental Monitoring Center, held a press conference on Aug. 20 to explain the considerable fish death: “During this time of year in Tianjin, especially during the hot days, the phenomenon of fish dying is quite common. Stagnant water is the main cause.”

Also, “because Tianjin is positioned at the end of nine rivers, the water conditions has never been good. When the temperature is high during summer, pollutants on the soil surface get washed down into the rivers during rain, causing the oxygen level in the water to decrease. Under these conditions, it is quite common to have dead fish at different rivers in Tianjin. Local residents call such phenomenon ‘Fan Keng,’ which means a lack of oxygen,” Deng added.

Previously, cyanide was suggested as an explanation for the die-offs.

Professor Linda Campbell, a scholar of aquatic ecosystem health at Saint Mary’s University in Halifax, Canada, told Epoch Times in an email that without seeing data on sodium cyanide concentrations in the water, “it is hard to interpret the probable causes behind the fish kill.”

She added, though, that Chinese media reports of fish deaths around south and southeastern China are fairly common.

The phenomenon is linked with eutrophication—the overproduction of algae in water due to fertilizer runoff and excess nutrients.

Eutrophication, which is sometimes caused by industrial pollution from an upstream source, also makes the environment “more stressful for fish, making them more vulnerable to pollution,” she said.

In 2011, Chinese Internet company Sina reported that large amounts of fish were found dead in Haihe Bund Park in Tianjin, about 3.4 miles from the current location. The cause of death was suffocation by pollution, according to Sina.

Fish had also died in huge numbers in other parts of Tianjin—over 110,000 pounds in Dagang Wetland Park in 2013, according to Hong Kong news outlet Oriental Daily—but the reports in the past two years often ruled out the possibility of pollution.

Regardless, many Chinese netizens have linked the most recent case of mass fish death with the Tianjin blast, and have become wary of the waters in the area.

“With so many dead fish, it is certain that the Haihe River has been polluted. After the polluted river water gets mixed with the ocean, water in the ocean is also polluted. We shouldn’t have seafood anymore! Only the devil believes the government when it says there’s nothing wrong,” wrote “driedbeefjerky” on popular Chinese microblogging site Sina Weibo.

“Sun Xiruo” wrote: “I now only use bottled water for cooking rice.”

Chinese citizens are generally skeptical of safety claims by the Chinese authorities following a disaster because they are notorious for euphemisms and withholding information. The Chinese regime most famously tried to hide the Severe Acute Respiratory Syndrome (SARS) outbreak in 2003.